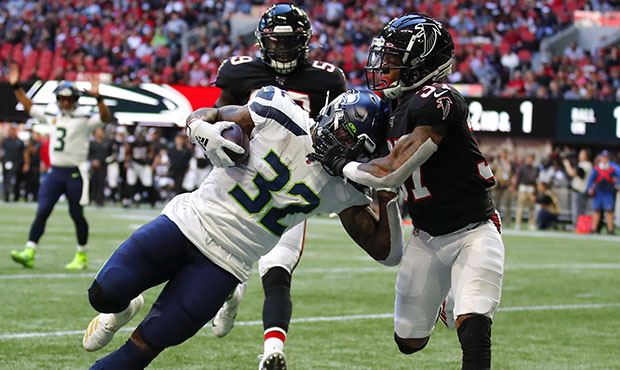 The Seahawks beat the Falcons 27-20 on Sunday to improve to 6-2 on the season.

As we do after every Seahawks game, we have collected the instant reactions of 710 ESPN Seattle’s voices to provide a glimpse into what you’ll be hearing throughout the day Monday on the station.

Last week, my co-host Stacy Rost and I agreed that the idea of the two-headed rushing attack that was supposed to be Chris Carson and Rashaad Penny would never materialize. What do you know? We saw it today – Carson had 20 carries for 90 yards and Penny had eight carries for 55 yards. Not sure if we should rely on that happening going forward or if it’s even worth doing, but it was nice to see.

The Seahawks dominated this game despite what we saw in the second half. There was one point the where it seemed like the outcome was in doubt. In the third quarter, Atlanta held the Seahawks’ offense to two straight three-and-outs while Matt Schaub and Julio Jones went to work on offense. The Falcons narrowed the score to 24-11 and put together a monster drive before Marquise Blair made the play of the game, stripping the ball loose from Devonta Freeman as he fell to the ground just in front of the goal line. All of that time and yardage consumed, and the Falcons had nothing to show for it. That’s what Pete Carroll wants. Win the turnover battle, burn the clock, keep control of the ball and field position. Most of these things happened today. After that the Falcons scored two more times, but it was too little, too late.

Should we be upset with the defense in the second half? I need some time to think about that (stay tuned for Monday’s show). Ronde Barber and Sam Rosen agreed on the FOX broadcast that the defense should be questioning themselves. If not for that one play by Blair, things might have been much different, but that’s how this team plays. Plus, Julio Jones is one of the best WRs in the game, so their failure to contain him didn’t exactly surprise me.

Still no pass rush, but it’s the halfway point in the season so there’s still plenty of time. I wouldn’t blame any of you for doubting whether or not we’ll ever see a sack again, but before they can do that their D-Linemen need a refresher on how to not line up offside.

Russell Wilson and Tyler Lockett looked as in-sync as they’ve ever been. Atlanta had no answer for them all day long. That’s one aspect of this Seahawk team that will never be in doubt.

Best of luck to Justin Britt, whose season may be over. That will be a huge loss for the offensive line and the team in general. We interviewed Justin on Thursday’s show and it’s clear that he holds a position of respect on this team. Great kid – we wish him the best.

It was a strange game, but a road win where we never felt like they were in danger of losing is something I’ll take every time.

The best parts: The Seahawks won the game, improved to 6-2 and are on a pace to finish the season at 12-4. They are also 4-0 on the road and have a great shot at matching or beating the team’s best single-season road record of 6-2 from 2013.

Rashaad Penny also stood out with 55 rushing yards on eight carries after appearing Sunday morning on a list of possible players to be traded on FOX’s NFL Today. Plus Tyler Lockett had a 100-yard receiving day, and DK Metcalf had two TD receptions.

But if there’s any doubt about Human Nature having nothing to do with outcomes of football games, we saw it in the second half in a big way. The Seahawks led 24-0 at halftime and had to hold off a spirited comeback by the now 1-7 Falcons. I guess a win is a win, and any win on the road is a good win, but still, it’s alarming when a backup journeyman QB like Matt Schaub throws for 460 yards.

And maybe it had something to do with the absence of cornerback Tre Flowers (neck), but I don’t know, it strikes me at this point as finding convenient excuses for a secondary that has been ripped apart by other so-so QBs this year. Consider that Andy Dalton, Jared Goff and Schaub combined to throw for nearly 1,300 yards against the Seahawks.

So as much as the Seahawks are in great shape record-wise at the midpoint of the season, it sure looks like trouble is lurking when they face more formidable competition in the next two months.

At their worst they can lose to anyone b/c of their suspect tackling, lack of pass rush & poor speed in zone coverage