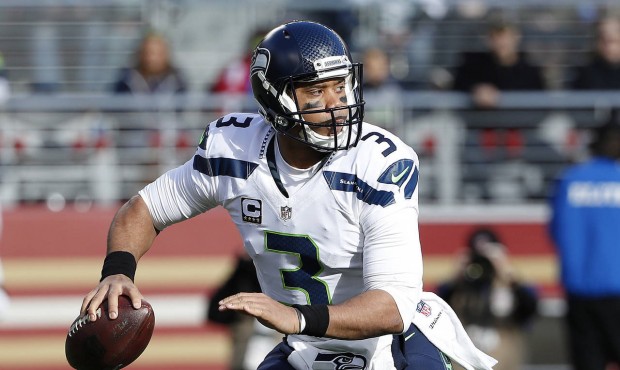 Brock Huard says it will be hard for Russell Wilson to reel back to cliches after speaking on Donald Trump. (AP)
(AP)
Share
BY ERIC MANDEL
Seattle Sports

When Russell Wilson gave candid remarks on Facebook Live about voting for Hillary Clinton and his concerns about President Donald Trump’s first few weeks in office, it was a change from his typical handling of controversial subjects.

Mike Salk: “I feel like people are more OK with athletes voicing political and social views than we are with aligning themselves with actual candidates. I’m not entirely sure why that is. I think political and social views tend to be, ‘Hey, this is who I am, this is what I think about, this is what I’m involved in.’ Supporting a political candidate seems to step over another line for some people. And yet, it’s Russell Wilson and it’s difficult to turn around and have a lot of real anger and resentment for a lot of people here in Seattle, especially about Russell Wilson. It’s hard to say what people are truly comfortable with. I can only speak for myself. Personally, I am only truly comfortable when an athlete is educated and informed on a subject, and B, I agree with them. That’s just how it is.”

John Clayton: “It’s surprising because you think of all of the Seahawks that will talk politics, from Richard Sherman to Michael Bennett, that Russell Wilson would be the last one. So I think it came as a major surprise because normally he’ll just stick to the ‘separation is in the preparation’ and the yard lines and the field and all those different things. I guess this is a team that is willing to speak up on political issues, and it’s just kind of surprising that Russell is now in that mix. I know he’s involved in the SoDo project, which of course is political in a sense of trying to get an arena downtown, but to throw in this is a little bit of a surprise. But, hey, free country, he’s allowed to speak.”

Tom Wassell: “I’m not really interested in anyone’s political opinion, much less Russell’s. It is, however, a pretty good indicator of him busting out of his corporate shell a little. I can dig that.”

Danny O’Neil: “It’s not what Russell Wilson said that’s interesting. He expressed a political sentiment shared by about three-quarters of Seattle. The interesting thing is that he said something on the issue at all. He has been adamantly neutral as a public figure. As controversial as the color beige. But if you’re applauding either Russell Wilson’s decision to comment on politics in general or to speak out, specifically, against Donald Trump’s actions in his first two weeks of his presidency, I’m curious what you thought about Mike Leach’s decision to introduce Trump at a rally in Eastern Washington. If you cheered one and not the other, stop to think about what that means: You like it when athletes and/or coaches speak up provided they share your political views. That’s shallow and it’s bound to lead to disappointment. Either you want to know about what people inside sports think about the world at large – and all the contradictions and complexities that might entail – or you want a stick-to-sports version that is clean and uncomplicated.”