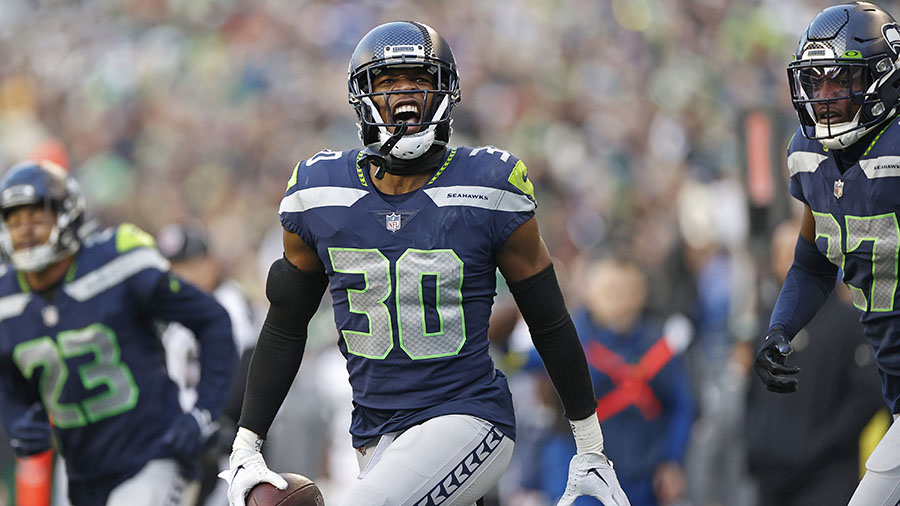 The Seahawks will go into the final week of the NFL regular season with momentum and a chance still to make the playoffs.

Seattle started strong and kept the New York Jets completely out of the end zone Sunday in a 23-6 win at Lumen Field, improving to 8-8 on the season and putting itself in a three-way tie for the seventh and final postseason berth in the NFC.

State of Seahawks: How they can make playoffs, where pick from Broncos sits

As we do after every Seahawks game, we have collected the instant reactions to the win from the voices of Seattle Sports. See what they have to say below, and be sure to tune in all week for much more talk and analysis, including The Pete Carroll Show with the Hawks head coach at 9:30 a.m. Monday.

I don’t care who is under center, any time you can hold an opposing offense to six points you have accomplished something major.

Yes, the Jets have their issues on offense. But for the first time in weeks, the Seahawks’ defense showed up and made a statement.

They got to the quarterback. They made plays on the ball. They hit hard. They showed off their speed. They picked off errant passes. And while they did allow two long runs (of 22 and 19 yards), the Jets only ran for 34 yards on their other 15 carries. And all of that even without linebacker Jordyn Brooks for much of the game.

That is dominant defense. The kind of defense that wins playoff games, and the kind we haven’t seen much in the second half of the season. If it is for real, it would make the Seahawks a much more dangerous team if they can get in. And it lets them play that complimentary style that is so important to Pete Carroll’s philosophy and plan.

So go Lions! If the Seahawks can get a little help, the league should take notice.

The Seahawks got two things they needed Sunday.

They needed to beat the Jets, and they did so with one of their most complete performances. The offense finished with 199 rushing yards, the third-most Seattle has had all year. And the defense limited the Jets to 279 net yards, the third-fewest allowed all season from Seattle.

I know the Jets have historically been a bad team and they’re on a losing streak now, but their defense ranked top three in yards limited to opposing offenses heading into this one. And perhaps the offense didn’t need to do much with New York’s offense struggling to put up points, but holding any team out of the end zone is impressive. And with nearly 200 rushing yards, 23 points, and no turnovers, it was a good day for a Seahawks offense that’s struggled of late (that last number is important as Sunday was their first turnover-free game of the season.)

But the Seahawks also got something else: a loss by the Washington Commanders. They only needed one to gain control back with that head-to-head record. Beat the Rams, and it doesn’t matter what Washington does. They didn’t get everything though – they’ll need a loss from the Packers next week, as well. A Lions win over Green Bay in Week 18 would give Detroit and Seattle the same record, but don’t forget that the Hawks hold the head-to-head tiebreaker thanks to a Week 4 win.

Still, what mattered today was controlling what they could control, and the Seahawks did just that with a dominant win.

The Hawks got the job done against a team you feel like they’re supposed to beat, although they had things go the wrong way in two games this season against teams (Raiders and Panthers) they were “supposed to beat.”

That is now two games in a row that the defense held Seattle’s opponent to under 300 total yards and less than 80 total yards rushing. Considering how problematic those numbers have been for this defense this season, that is huge.

Also another huge day for Kenneth Walker III, who rushed for 133 yards on 23 carries. Like the run defense, the rushing offense has been a problem for the Hawks as well, so the fact that they have put up the numbers on the ground that they have the past two games is very encouraging. Walker is now 64 yards away from 1,000 in his rookie season, and while a 17-game schedule has devalued that marker, if he’s able to reach that number he will have done it in 15 games. Plus, he didn’t get double-digit carries in a game until Week 5 of the season after Rashaad Penny was injured.

With one game left, the Seahawks need to beat the Rams and pull for the Lions to beat the Packers in order to find their way into the playoffs.

Mike White started the season as the Jets’ third-string quarterback, and the Seahawks made him look like one today. The effectiveness of the Jets’ run game has taken a hit since Breece Hall was injured in October, but we have seen other backups have success against the Seahawks this year. Credit the defense for not allowing that to happen and making sure that it was White who would have to beat them by passing the ball. The Jets ran the ball just 17 times while White attempted 46 passes, completing only 23 of them and throwing two interceptions.

The takeaways were a welcome return after the Seahawks went three games without forcing one. The defense also made its impact in pressuring the quarterback, something it wasn’t able to do at all last week against the Chiefs. White was sacked four times and hit 10 times total – in addition to the numerous times his throws were rushed or out of reach of any receiver due to Seahawks pressure.

Certainly, there is some concern for Jordyn Brooks after he left the game with a knee injury. Brooks is a guy who has rarely missed a snap this season, and that will be a big void to fill next week against a Rams team that had success moving the ball against Seattle earlier in the season.

Ken Walker set the tone on offense with his 60-yard run to start the game, and it’s clear that when healthy he completely changes what the Seahawks are able to do on offense. After the 26 carries for 107 yards against the Chiefs, Walker surpassed the 100-yard threshold again with 23 carries for 133 yards. That kept the pressure off quarterback Geno Smith, who finished with a pedestrian stat line, but he didn’t make any bad decisions and didn’t need to force throws due to a combination of the run game and good starting field position.

The Jets’ defense is good, especially their secondary, and they were able to shut down the Seahawks wide receivers. However, that’s why an effective rushing attack is critical for this offense: it opened up the middle of the field for the tight ends to work, and the trio of Colby Parkinson, Noah Fant and Tyler Mabry played key roles in the Seahawks’ first two touchdown drives. On a day where DK Metcalf was blanketed in coverage and Tyler Lockett dealt with injury, Parkinson was an important safety valve for Smith, finishing with five receptions on seven targets, including the first touchdown.

A three-game losing streak is over, and the Seahawks are heading into the final game of the regular season with a chance to make the playoffs. That’s not a bad way to start 2023.