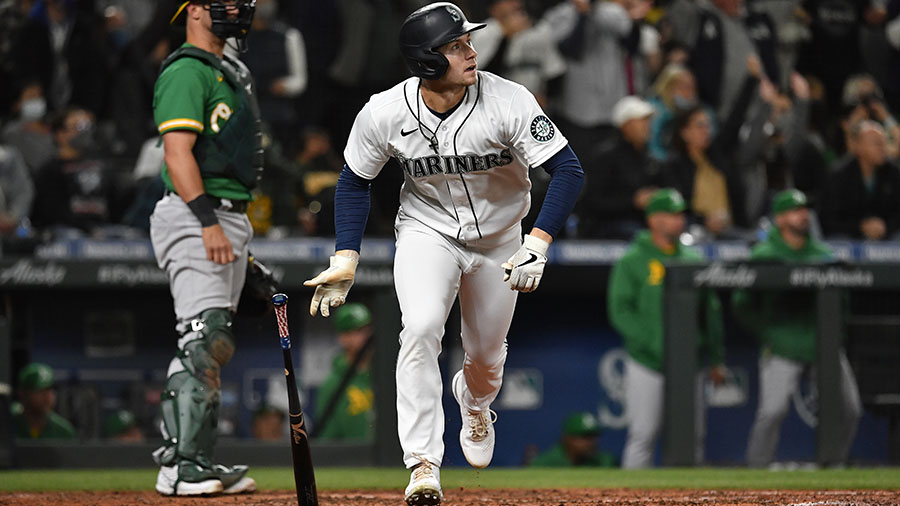 The 2021 Mariners just keep on winning, and with only three games left in the season they sit just a half-game out of the second American League wild card spot after beating the Oakland A’s 4-2 on Wednesday.

Salk: What sets these M’s apart is they’re playing like a playoff team

Someone who is undeniably loving the run the Mariners are on is the man who put the roster together. That would be president of baseball operations Jerry Dipoto, who shared his thoughts on the team’s play and some key contributors during his weekly visit with 710 ESPN Seattle’s Mike Salk on The Jerry Dipoto Show.

Here’s a look at what Dipoto had to say Thursday morning.

Hitters get on hot and cold streaks, as do starting pitchers, and we’ve seen that from the Mariners this year. What we’ve also seen is that this bullpen is elite elite, and has, at times, carried this team to many key close wins.

Simply put, Dipoto thinks the Mariners’ bullpen has been the most important aspect of the team this season.

“If I had to pick an MVP, it would be our bullpen guys,” Dipoto said. “They’ve done a phenomenal job in tight games night after night for (159) games and have been awesome.”

Any team sport requires self sacrifice for the betterment of the team, and in the case of the 2021 Mariners, the bullpen perfectly embodies that, Dipoto said.

“Throughout the course of the year, even with the fact that we have three pitchers with 10 or more saves, no one has the ego of ‘I have to go first,'” Dipoto said. “They’re all willing to be the driver or navigator, and when they have to, they ride in the backseat. We went out and we acquired the closer (Diego Castillo) from the best team in the American League (the Tampa Bay Rays) and he’s right now pitching the seventh inning for us and he’s happy to do it. Paul Sewald has pitched anywhere from early in the game – he was our (Triple-A) Tacoma opening day starter – and now he’s pitching the highest-leverage innings that we have.”

Sewald has been a revelation for the Mariners this year after a lackluster start to his MLB career with the New York Mets. He’s pitching shutdown innings against opponents’ best hitters, and nearly every time, the right-hander is coming out on top.

What makes Sewald’s story so great, Dipoto said, is his open-mindedness when joining the organization.

“He came here on his own volition. He wanted to be with the Mariners and he felt we could do something to help him,” Dipoto said. “It was an opportunity for him and obviously a great opportunity for us. All the credit goes to Paul for what he’s done.”

Dipoto said he and the scouts and coaches saw “a really good arm” with “deceptive ride” on the fastball when it’s up in the strike zone. They also felt that his slider could be a plus pitch if used in a different way, and that’s become one of the most devastating pitches in all of baseball this season.

“We, our pitching group, reshaped his slider in such a way that it played very well off his fastball and I think right now you have to qualify him as one of the great bullpen stories in 2021 not just for the Mariners, but across the baseball world,” Dipoto said. “He’s doing it with all of the same tools he had, but just using them in a different way.”

Casey Sadler is another great success story coming out of the Mariners’ bullpen. The team acquired him off waivers last year and all he’s done of late is go 26 outings (and counting) without allowing a run.

“We had the fortune of picking him up off waivers and it was simply talking to him about pitch usage,” Dipoto said. “As I said, there is no ‘one shoe fits all’ mentality with us. We look at each player, each pitcher, we determine what we can do to help that pitcher and then we do it. Our coaches have done a wonderful job implementing it, and our players have done an equally wonderful job of taking it and running with it.”

The Mariners needed a hit in a big spot Wednesday night from rookie outfielder Jarred Kelenic, and he delivered by driving in two runs with a double that just missed leaving the ballpark in the sixth inning.

Kelenic’s .177/.260/.349 slash line through 90 games is obviously not the most impressive, but the 22 year old has really come alive of late, which has given the Mariners’ lineup a big boost as they make their final push for the playoffs.

In 26 games in September, Kelenic is slashing .242/.321/.537 with seven home runs and 18 RBIs. His success at the dish started sooner than September, Dipoto said.

“This really starts back at the start of August. Since the start of August, JK has been among the best sluggers in our league,” he said. “His ISO power ranks right up there with guys like (Nelson) Cruz and Vlad Guerrero Jr. and Aaron Judge. He has performed. This is a version of him we always thought was in there. It takes players time.”

What has helped Kelenic get to this point even after some of the immense struggles he had early on? His confidence.

“Not shockingly he had moments where, like anyone, he was going to suffer through some struggles and he held his head high and just kept battling,” Dipoto said. “I thought it was appropriate for the moment to see him holding that ‘Believe’ sign up last night because he never stopped believing in his own ability and right now he’s just kept applying it every day.”

What’s also helped Kelenic is his willingness to take instruction from his coaches, Dipoto said. Since making his MLB debut, Kelenic has worked hard on his stance, swing and pitch selection. Now, it’s all starting to come together for the former top prospect.

“His struggles were very real for a couple of months. And now, for the month of September, I believe by weighted runs created plus, he’s our best hitter,” Dipoto said. “That’s an ongoing trend for the last two months. He’s really starting to show up in the way that we always believed his skills would because we always thought the personality was going to drive him.”

How about Mitch Haniger?

Many players have come and gone for the Mariners’ lineup this season, but one of the few constants has been outfielder Mitch Haniger hitting in the top half.

After missing most of 2019 and all of 2020, it was unclear how Haniger would do and how his body would hold up.

Salk asked Dipoto about keeping Haniger, who’s signed through 2022, in Seattle for the long-term.

“Obviously we want Mitch to be here and we’ve talked about that before,” Dipoto said. “But we’ll have any discussions at the appropriate time. I don’t think this is that time (during a playoff push). We’re going to focus on what’s happening with the rest of our season.”

Dipoto then went on to praise Haniger’s remarkable 2021 campaign and advocate for him to win an under-the-radar award.

“As I said with conviction about the way our team plays or what our bullpen has produced, I don’t think there’s any question that Mitch should be the Comeback Player of the Year,” Dipoto said. “A year and a half missed and just the fact that he’s played every day, and whether it’s right field or DH his counting stats have been unbelievable. He, like Ty France, has been hovering right above an .800 OPS all year long. To go out there and do that after missing all that time has been unbelievable.”

Haniger is not just producing better than he ever has, he’s playing the game in a slightly different way of late.

“Really these last two to three weeks and specifically this homestand, it is so fun to see the smile and the emotion coming out of Mitch, which we’ve really never seen,” Dipoto said. “This is a fun and different version of Mitch and that is exciting to watch.”

Listen to the full Jerry Dipoto Show at this link or in the player embedded near the top of this post.

• Shannon Drayer: Why this Mariners run is real, how Anderson’s start helped
• Mike Blowers: M’s playing their best baseball as they make a run at playoffs
• ‘The future is now’: Scott Servais on Mariners’ final push for playoffs
• Who is Mariners rookie Matt Brash? What you need to know
• Dave Sims: What stands out about how Mariners have stayed in the race