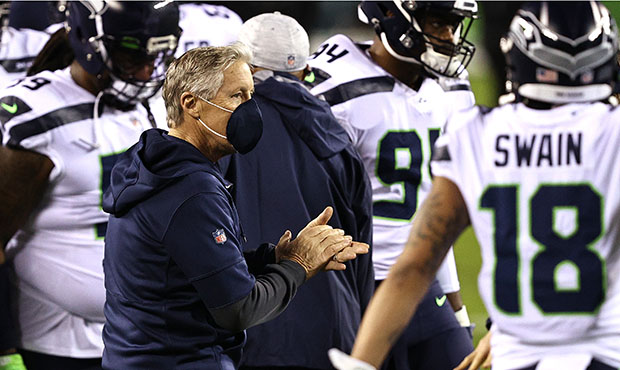 Is 2020 Pete Carroll’s best coaching job with the Seahawks?

Pete Carroll has led the Seahawks to their ninth winning season in a row in 2020. (Getty)

The Seahawks enter Week 15 of the 2020 season at 9-4 with an opportunity to clinch a playoff spot and with an NFC West crown likely up for grabs come Week 16. With last week’s win, Seattle has now had a winning record for nine years in a row.

Carroll: Greg Olsen, Quinton Dunbar could be activated for Sunday

The 2020 season – and the year itself – has been like no other due to the COVID-19 pandemic and in the NFL, things have been shaken up big time as teams have protocols they must conduct, there is daily testing, there are no fans in the stands and acquiring new players via trade and free agency takes a lot longer than usual because of the protocols that are in place.

The Seahawks, like the rest of the league, are handling that aspect of the season as best as they can, and head coach Pete Carroll has made it clear he sees it as a competition and a challenge to keep the team running as smoothly as possible. And so far, he and the Seahawks have done great, with just one player winding up on the COVID-19/reserve list in defensive tackle Bryan Mone, but Carroll said Mone didn’t test positive for the virus.

Then there’s the football side of things, where the Seahawks have one of the better statistical offenses in the league and have a defense that after starting the year as the league’s worst, has turned a corner and allowed 14.5 points per game over the last four weeks. Seattle has also been ravaged by injuries on both sides of the ball, namely at running back and in the secondary.

So all of that begs the question of whether or not 2020 is the best coaching job that Carroll has done in Seattle. Dave Wyman, Dave “The Groz” Grosby and Danny O’Neil discussed the job Carroll has done this season on 710 ESPN Seattle’s Wyman and Bob on Thursday.

“Just the way he’s managing all these different personalities and new guys and injuries and the whole COVID thing,” Wyman said, saying that’s what has stood out most to him this season.

Grosby said it’s hard to say that 2020 is Carroll’s best year largely because he’s been so consistent since coming to Seattle in 2010.

“He has put together … a program here, and there’s no other way to put it, that is effective and is immune to outside influences and it doesn’t matter what it is – injuries, what has happened this year (with COVID-19) – he is consistent,” he said.

For most of Carroll’s tenure, the Seahawks have been known for a powerful running attack on offense and a stingy defense that rarely blitzed. Those have both been thrown out the window this year, which O’Neil says is a positive when looking at the job Carroll has done.

“I think that this year shows his willingness to adapt to the talent he has rather than the style he wants to play,” he said. “I do think that they’ve shown some changes that are I think really reassuring that should be really exciting for people who are fans of the team. I think it’s been one of his best jobs.”

While it’s one of Carroll’s best jobs overall, O’Neil thinks that distinction still belongs to the 2014 season, when the Seahawks traded disgruntled receiver Percy Harvin got on a roll late and went to their second Super Bowl in a row.

When looking at Carroll’s success in Seattle as a whole, O’Neil thinks it’s impressive because it comes on the heels of his incredible run in college at USC.

“I think what’s impressed me the most about Pete’s success with Seattle is that you can argue that college and pro coaches are an entirely different job,” he said, noting that a lot of energy in college goes into recruiting and that it’s an entirely different world. “… The culture he built at USC, he built in Seattle and it’s been just as enduringly effective as anything we’ve seen outside of Bill Belichick (in New England) in this league over the past 10 years.”

Wyman, who played linebacker in the NFL for nine years, said the way Carroll has utilized safety Jamal Adams, who leads the team with 8.5 sacks in nine games, is what stands out to him.

“He looks like a DB playing linebacker and that’s just not what Pete’s defense is about, the way they’re sending him all the time off the edge … He’s having to manage him all over this defense and all over (the place) and how they use him and everything and he’s very much got his fingerprints all over this defense,” Wyman said. ” … (Carroll’s) ability to adapt, I think a lot of other coaches would have stuck with the formula and he’s been able to work a guy like Jamal Adams into his defense.”

COVID-19 has turned some teams sideways throughout the year, with key players missing practices and games across the league, but the Seahawks haven’t had that issue. O’Neil thinks how Carroll and the Seahawks have handled that, as well as Carroll’s attitude towards the protocols, speaks volumes about how he runs the team.

“Football coaches have a full plate. They’re already doing more than you can do in a 24-hour day, and now you add onto that, you’ve got to do all of that while managing technology and remote meetings and some of the things. It’s a pain in the butt. It’s a huge pain in the butt,” he said. “(Carroll) doesn’t complain about it, he doesn’t look at it like ‘how much more can they ask us to do?’ It’s like ‘nope, this is what we have to do and we’re going to embrace this challenge and we’re going to do everything we can to meet it and the more time we spend complaining, that’s less time we have to do this the best we can.'”