Wassell: Why now is perfect time for Mariners to change their uniforms 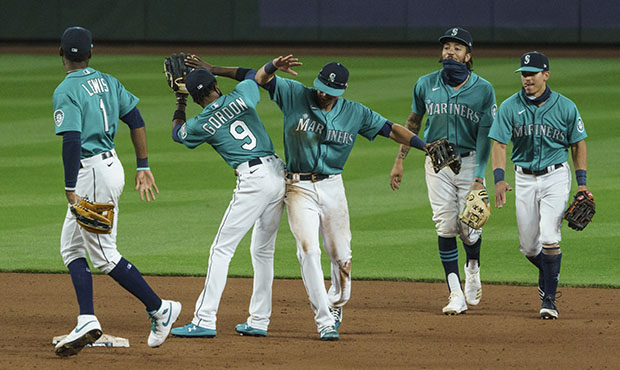 The Mariners' current uniform style dates all the way back to 1993. (AP)
(AP)
Share

I’m watching the Padres and the Dodgers the other night and the contrast between the two teams couldn’t be more obvious in terms of the way they look.

From overlooked to ‘the guy,’ Kyle Lewis still trending up for Mariners

Los Angeles is wearing the same glorious colors they’ve been sporting since they played at Ebbets Field in Brooklyn. The Padres are back to their “taco” look with the brown, white and yellow. In San Diego’s case, they’ve rebranded their look at a time where they have a handful of exciting players (maybe the new face of the game in Fernando Tatis Jr.) and are suddenly visible to a national audience. If you’re gonna play on the big stage, you might as well look good doing it, right?

The Mariners are ready to make that same jump. Postseason baseball is a real possibility in 2021. Why not do as the Seahawks did in 2012 and establish a new look unseen previously in the league as the team is about to bring more attention to itself.

Use whatever colors you want (except teal) – just make it pop! Let the current uniform configuration lie with the glory of the mid-90s and early-2000s.

Our colleague Mike Salk has gone as far as to suggest they should change the name of the team. I actually like the name Seattle Mariners. It’s what I grew up with and it rolls off the tongue. There’s no need to completely abandon the past. Even without a ton of success over the last 43 years, there’s a tight bond between die-hard fans and the team.

It’s time for this group of players to create their own identity. No more living in the shadow of Griffey, Edgar and anything having to do with 1995. Those memories aren’t going anywhere. We need to create our own memories. We’ve waited long enough. This team is ready to break through.

A new uniform combo might seem like a low priority, but there’s a reason that people will tell you to “dress for success.” It helps your confidence. Evidently, Justin Dunn has quite the shoe collection (he told us such in an interview on Tom, Jake and Stacy before the season). How much fun would he have trying to match up his footwear with whatever he’s wearing? It’s fun, people – FUN!

Don’t you want to spend some more hard-earned money on a new jersey? I do. I think I’ll go with a Justus Sheffield No. 33.

Also new from Tom: Hawks should wait and see about re-signing Carson

Stacy Rost of 710 ESPN Seattle's detailed all the factors that make the Seahawks' 2-4 start to the season such a big story.

Close
Wassell: Why now is perfect time for Mariners to change their uniforms