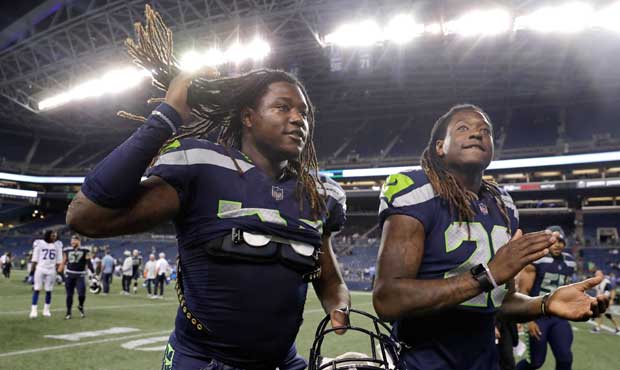 Youth was served for the Seahawks Thursday night in a 19-17 loss to the Indianapolis Colts.

O’Neil: Preseason starts with reminder of what Seahawks still have

Let’s get some observations of the pre-season opener.

The pass rush has some hope. With Frank Clark and Dion Jordan inactive and Michael Bennett and Cliff Avril gone, the Seahawks had more uncertainty with the pass rush than the early days when Pete Carroll came in 2010. Two rushers stood out: Green and linebacker Barkevious Mingo. Green was a stud. He had a sack-and-a-half, seven tackles and three quarterback hits.

What was apparent is that he’s a quick study and is rapidly learning the proper techniques at the line of scrimmage. Mingo is clearly filling the old role of Bruce Irvin. He’s a strong side linebacker who can put his hand on the ground and rush as a defensive end. Whether he’s is rushing from linebacker on a blitz and beating a tackle with a move, Mingo can get to the quarterback quickly with his 4.58 speed.

Mike Solari’s expanded blocking scheme got off to a good start. The running backs like the power blocking that makes it easier to run downhill and try to break tackles. Pass blocking also looked good in the opening drive in which Russell Wilson completed four of five passes in a 12-play, 60-yard touchdown drive in the first quarter.

Cornerback Tre Flowers look as though he can play early in his career. The fifth-round pick played 31 snaps and showed great footwork and the ability to stay with a receiver who is trying to beat him deep. Even though he was a safety in college, Flowers studied tape of cornerback Richard Sherman, trying to learn his footwork and how to mirror a receiver. He’s flipped his hips well adjusting to receiver’s moves. His next mission will be to react and adjust to some of the short, quick routes thrown against him from quarterbacks off three-step drops.

Chris Carson continues to excel in the backfield. At the end of the season, Carson weighed 213 pounds. Now he’s up around 226-to-228 with just 6.5 percent body fat. He’s powerful and elusive. He had 26 yards on four carries.

Even though his numbers weren’t great (eight carries for 16 yards) rookie Rashaad Penny made some impressive moves. According to Pro Football Focus, Penny forced three missed tackles, the third best in the league out of the 41 backs who had at least four carries Thursday night. Once he breaks a tackle or two and gets to the outside, he’s a hard runner to bring down. He now weighs 236 pounds.

It was a good outing for linebacker Shaquem Griffin. Veteran linebackers on the team advised Griffin to not worry about things and just play football. That’s what was so impressive of his play Thursday. Griffin led the team with nine tackles and had a stretch in which he made tackles on four consecutive plays.

Germain Ifedi had another penalty, and that has to stop. He remains the starter and may not have many challengers (Jamarco Jones was carted off with an ankle injury and Isaiah Battle left the game with a sprained knee).

Punter Michael Dickson is amazing. Not only did he average 50 yards on three punts, but his net average was 47.3. Even better was the fact that the way the ball comes down makes it hard for returners to catch (one Colts returner muffed a punt from Dickson, though managed to recover it afterward). Twice the ball hit the ground.

Tedric Thompson continues to excel at the free safety position. On one play, in which the Colts tried to throw a pass in the endzone on Tre Flowers, Thompson showed nice range, sprinting over from the middle of the field as the ball was in the air to make it over and help Flowers in coverage.