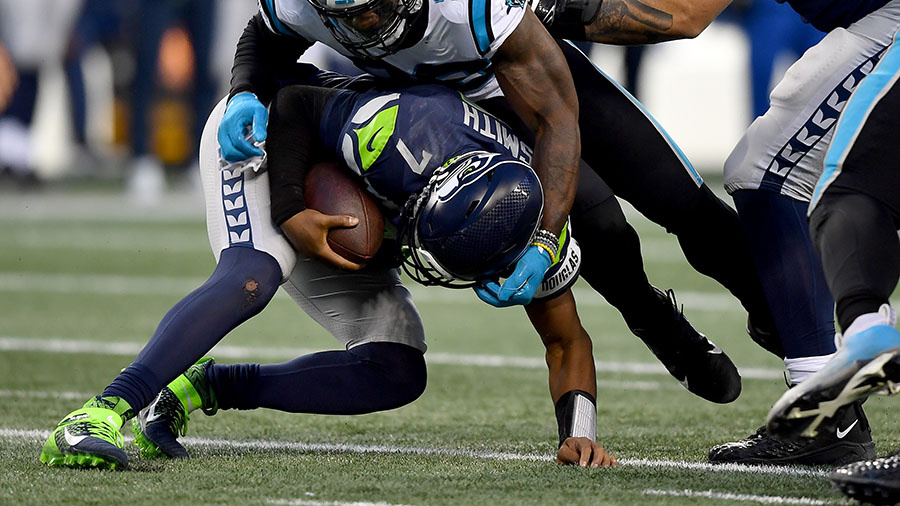 The Seahawks’ ongoing defensive struggles continue Sunday with a disappointing 30-24 loss to the Carolina Panthers (recap story) in front of their home fans at Lumen Field.

While Seattle did beat the Los Angeles Rams a week ago, it’s been four straight games of worrisome performances as the Hawks have fallen to 7-6 after dropping three of their last four contests, failing to capitalize on a four-game win streak that immediately proceeded this stretch.

The Seahawks now have a short turnaround before a gigantic Thursday night matchup against the NFC West-leading San Francisco 49ers (9-4), who Seattle is chasing in the division.

As we do after each Hawks game, we have collected the instant reactions of the voices of Seattle Sports 710 AM to Sunday’s loss. Get a look at what they have to say below, and listen to the station all day Monday for much more analysis beginning with Brock and Salk at 6 a.m. and The Pete Carroll Show at 8:30.

The Seahawks’ defense has been atrocious against the run, but their performance is now reaching a level I’m reserving only as “fascinating.”

Fascinating here still means ugly, mind you. But this is a unit that’s surrendered 960 rushing yards in its past five games. The Seahawks have been getting gashed all year. And outside of the loss of safety Jamal Adams to injury a few snaps into the season, this is a defense that’s had much of the same personnel.

They aren’t overly young. Rookie defensive backs Tariq Woolen and Coby Bryant are starters, but the regular starters on the defensive line, linebacker group, and remaining secondary spots are all veterans.

They aren’t looking at an entirely new system. Yes, they’ve switched from a 4-3 to a 3-4, which can leave weaknesses against the run. But they’ve had stability with most of the starting group and with the coaches — new defensive coordinator Clint Hurtt has been a longtime member of Pete Carroll’s coaching staff.

Week after week, opposing offenses know exactly what they want to do against this defense. And the defense knows their opponent will run the ball. And still, the Seahawks can’t stop them.

What’s becoming more clear is that this isn’t a problem that can be fixed in a single season. Can it be fixed by adding an edge rusher with a top two or three draft pick? It’s certainly where the offseason efforts need to start.

This is now four games in a row that the Seahawks’ defense has had the ball run down their throats. Defense was a problem to start the year, and after a few weeks of success in the middle of the season it’s back to being a problem again.

The Panthers couldn’t have been more predictable and one-dimensional, but it didn’t matter because it was working all afternoon. There is nothing worse than knowing exactly what your opponent is going to do, yet you can’t do anything to stop it.

Throw in a a dreadful day for quarterback Geno Smith and the offense with some terrible throws and decisions, plus another game with no running attack, and this team had no chance.

Carolina QB Sam Darnold was 9 for 12 for 84 yards and a touchdown in the first half. He finished the game 14 for 24 for 120 yards and that one score. He did little to nothing in the second half, and he didn’t need to because the rushing attack chewed up the Hawks’ defense for 223 yards and two TDs.

More than a few problems to address on a short week with the 49ers coming to town on Thursday night.

It’s tough to win when you combine a one-dimensional offense with a suspect defense. Down two running backs, the Seahawks knew they were going to have to rely on the passing attack, and the Panthers came in properly prepared for it, as well.

With all of that tilted in favor of Carolina, it was an absolute worst-case start for the Seahawks: allow a nearly eight-minute drive on defense and then throw an interception that leads to a touchdown on the next play.

The early 17-0 hole was too much to overcome, especially with the way the Panthers’ offense moved the ball and wore down the Seahawks’ defense.

The Seahawks’ coaching staff talked all week about the physicality of the Panthers’ offensive line, and when they simply lined up and ran the football, they could not be stopped today. It was 17-0 just minutes into the second quarter but at that point the Panthers had already run the ball 16 times for 62 yards. The backbreaker came in the fourth with a 10-play, 74-yard drive that culminated in a touchdown, where the defense had been on the field for 63 plays and 34:39 (compared to just 18:24 on the field for the Seahawks’ offense).

It’s gut-check time now with a short week and a game against a 49ers team that runs the ball as well as any team in the NFL.