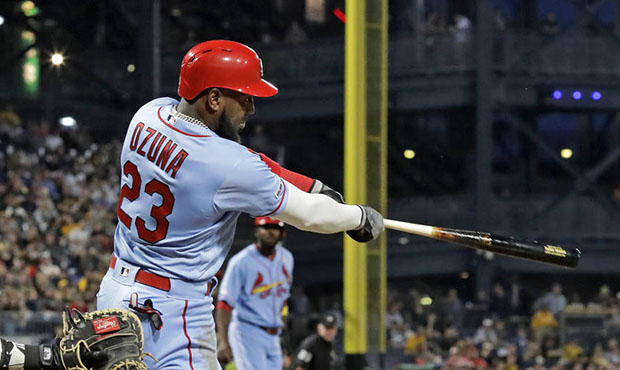 Mariners news has basically been nonexistent since their season ended over three weeks ago, a rarity in the Jerry Dipoto era, but something intriguing popped up Monday.

According to Dominican reporter Adan Lesther (and translated by MLB insider Héctor Gómez), the Mariners are one of eight teams interested in free agent outfielder Marcell Ozuna. Not only that, but the report says Ozuna could command a seven-year, $160 million contract.

According to Dominican sports journalist @Adanlesther OF Marcell Ozuna could get a 160M$/7 years contract. Reds, White Sox, Marlins, Blue Jays, Cardinals, Royals, Athletics and Mariners on pursuit as of now.@z101digital @ZDeportes https://t.co/UtUPe8lcRJ

First, as astutely pointed out over at Sodo Mojo, this report screams of an agent trying to drum up some buzz for a client. Second, I’m sure Ozuna would love to get a long-term deal totaling over $150 million in salary, but we saw last offseason that baseball front offices are doing their best to get away from those kind of contracts. Sure, Ozuna is good, but he’s also coming off a season in which he hit .241 with 29 home runs and an .800 OPS in 130 games – good but not particularly eye-popping numbers for a slugger playing in 2019, a year in which a new baseball resulted in records being set all over the league.

The biggest thing, however, is how little sense the addition of a player like Ozuna would make for the Mariners in their current situation.

Yes, the Mariners were said to have had interest in Ozuna in the early days of Dipoto’s tenure as general manager – back when Ozuna was younger, still with the Marlins, and considerably cheaper. But if there’s one thing Seattle really doesn’t need now, it’s another outfielder, and especially not one who would be considered a big ticket signing after the team shed the contracts of Robinson Canó and Jean Segura.

As I’m sure you’re well aware, the Mariners will be entering the second year of their rebuild in 2020, and their plan doesn’t bank on a return to contention until 2021 at the earliest. In one sense, signing Ozuna would be a bit of a redundancy in that they already have an outfielder with a similar makeup – Mitch Haniger, who like Ozuna has been to an All-Star Game and will be 29 years old before 2020. And don’t discount that Haniger is considerably cheaper than Ozuna because he’s just about to become arbitration-eligible for the first time.

An addition of Ozuna (or another player like him) would provide a boost to Seattle’s lineup, but it would also make it harder for the Mariners to see what they have in their stash of young, promising outfielders. In addition to Haniger, they have Domingo Santana (27) and Mallex Smith (26) as experienced major leaguers. Go down a level and there’s prospects Kyle Lewis, Jake Fraley and Braden Bishop, all of whom saw time in the big leagues in 2019 and who Seattle will want to play a good amount next year. Down yet another level, there’s Dom Thompson-Williams and top prospects Jarred Kelenic and Julio Rodriguez in the minors.

Ozuna would be the best of that bunch in 2020 if he joined Seattle, but I would still consider him an unnecessary add – and an unlikely one because Dipoto isn’t expected to be as active this year as in previous offseasons, nor has he ever been a big fan of splashy free agent signings. In fact, if Dipoto is going to make a move in the outfield prior to the 2020 campaign, I’d bet the house on him trading one (or more than one) away to add to a pitching staff that could really use the help.

And about that pitching staff. I’m sure the Mariners will be keeping their eyes on names in free agency as big or bigger than Ozuna, but if they’re going to make a big push for anybody, it would almost assuredly be a pitcher.

I’ll be curious to see what other free agents get tied to the Mariners in the rumor mill this offseason, but I’d be shocked if anything more substantial comes out about them pursuing Marcell Ozuna.