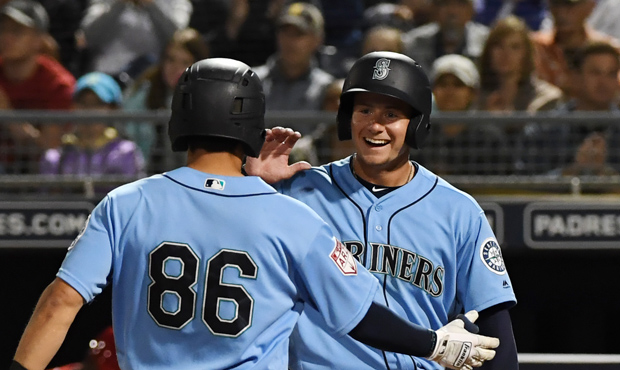 How soon could Mariners fans see Seattle’s top prospect in the big leagues? According to general manager Jerry Dipoto, it will likely be sooner than originally expected.

Dipoto joined 710 ESPN Seattle’s Danny, Dave and Moore on Thursday for another edition of The Jerry Dipoto Show, and chief among the topics was the progress of 19-year-old outfielder Jarred Kelenic. The sixth overall pick of the 2018 MLB Draft who the Mariners acquired in a December trade with the Mets, Kelenic was promoted from Low-A West Virginia to High-A Modesto Tuesday, and he homered in his first game Thursday night with the Nuts.

Dipoto said that while the Mariners identified Kelenic as a player who could move quickly through the minor leagues when he joined the franchise, he’s already proving that the timeline they had in mind for him was conservative.

“You typically see the high-talent high school hitters starting to debut in the big leagues right around the age of 21 or 22,” Dipoto told Danny, Dave and Moore. “I would say right now we are guessing that Jarred is running ahead of that, if not well ahead of that pace. He’s really advanced. And we’ll find out sometime in the next three or four months where we anticipate, or an ETA. It’s hard to place on a guy until he gets to Double-A, but right now we would sense that that would be much sooner than we would’ve otherwise anticipated, which means probably sometime in the next two years.”

Kelenic is likely the most elite prospect the Mariners have had in decades, as ESPN MLB Insider Jeff Passan expressed to Brock and Salk. But his path to promotion wasn’t totally smooth.

“Despite the crazy numbers that he’s throwing up to this point in the season, he started his year 1 for 25,” Dipoto said. “And he had to battle adversity as a really high-profile player, going in to where he was supposed to be the star at that level, and he wasn’t. And (he) had to bounce back.”

That’s exactly what Kelenic did, as he left West Virginia the team leader in 10 notable offensive categories, including home runs (10), OPS (.955) and even stolen bases (seven).

“His work ethic is unquestionable. And then the rest is just what you see on the field,” Dipoto said.

Listen to Dipoto’s full interview here or in the audio player embedded in this post.

Related: Kelenic unlike any prospect M’s have had in recent memory