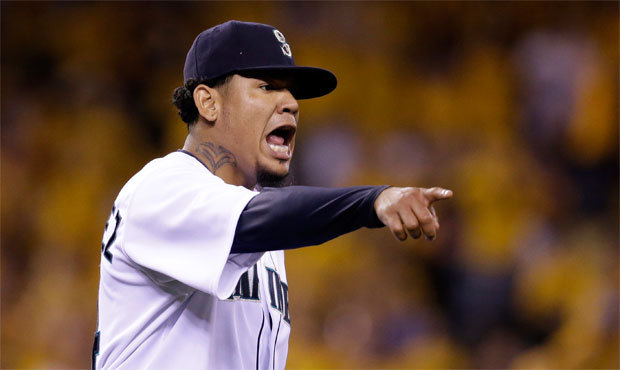 Quick notes today as I had some additional pregame duties earlier:

The story will be on the field as Felix Hernandez looks to extend his MLB-record streak of consecutive games of seven or more innings pitched while surrendering two or fewer earned runs. A fringe record but remarkable accomplishment as Felix has held opponents to a very pitcher-like line of .168/.208/.229/.437.

Felix, who leads the American League in ERA at 1.97, comes into the game just two innings shy of 2,000. He will become the youngest player to reach 2,000 innings since Dwight Gooden in 1993.

Felix will be pitching once again on an extra day of rest and with closer Fernando Rodney unavailable this could be the game we see him go nine. The Blue Jays arrived at their team hotel at 1:30 this morning after playing 19 innings and canceled batting practice.

• James Jones was added to the roster before the game, taking the spot of Erasmo Ramirez, who was optioned back to Tacoma following the game Sunday. Manager Lloyd McClendon plans to use him on the corners, most likely in later innings and in pinch-running situations.

• Michael Saunders was not an option to be added to the roster as he has traveled home to Colorado for the birth of his second child. He will need a few games at Triple-A once he returns before he rejoins the Mariners.

• Should the Mariners get into a save situation tonight, McClendon said that he would most likely go to Danny Farquhar.