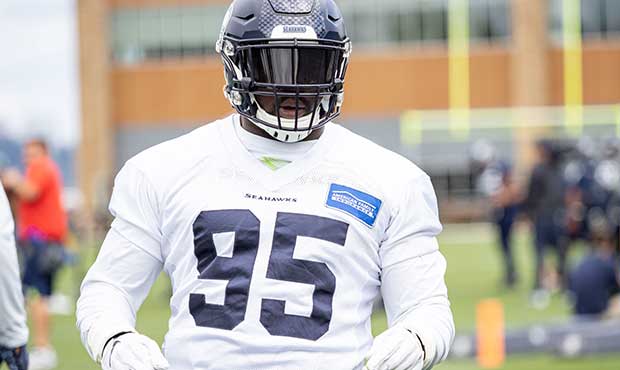 Seahawks rookie defensive end L.J. Collier is indeed expected to be out for a few weeks, Pete Carroll confirmed Thursday, though the head coach added that the team will be careful about bringing the rookie back too quickly as he recovers from a “rare” type of sprain.

“It’s not a garden-variety sprain at all,” Carroll said when asked about the injury. “It’s a little bit of an unusual one; kind of upper part of his foot. It’s an unusual one for us. We really haven’t had a guy who sprained his ankle just like this, so that’s why we’re going to be really slow to make sure we know what we’re doing with this. It’s a rare sprain.”

Carroll said Collier is expected to be out for “a little bit.”

“It’s unfortunate,” Carroll said. “It’s really an awkward position that he got tangled up in. And so we’ll have to take some time here to figure it out, it’s going to take some weeks though.”

Collier was injured during a play toward the the end of practice Tuesday. He was able to limp to the sidelines, where he was tended to by a trainer before being carted to the facility. Initial reports indicated the rookie had been diagnosed with a high-ankle sprain, which could sideline him for up to eight weeks, though it’s not unusual for a player to return sooner; former first-round pick Germain Ifedi suffered a high-ankle sprain in the 2016 preseason and was sidelined for just four weeks. The Seahawks’ regular season opener against the Cincinnati Bengals is five weeks away.

In the meantime, the Seahawks will turn to Quinton Jefferson — who Carroll said is “doing a nice job” at 5-technique — and Rasheem Green.

Green talks about his ‘bad year’

Speaking of Green, the second-year defensive lineman spoke about his rookie season — which he described as a “bad year” — in an interview with Bob, Groz and Tom on 710 ESPN Seattle Thursday. The former Trojan was one of Seattle’s best players in the 2018 preseason, but an ankle injury in Week 3 sidelined him for four games. He finished the season with nine tackles and one sack.

“When the season was all done, I thought it was a bad year,” Green said, “because — I don’t know, even throughout my whole career from when I started playing football, I’ve never been the guy to watch from the sidelines… it just feels weird because it was my first time not being out there and it was the first season where I’ve actually missed a game because I was hurt, and I’d never missed any games before. It was just a bad year, because I didn’t play how I wanted to play and I just knew I let myself down, I let the guys in the room down, people that wanted me to play well (and) I just didn’t play well. I just felt bad about that.”

Listen to that interview on Bob, Groz and Tom’s podcast page.

• Guard Mike Iupati has a mild foot sprain, and while he isn’t far from making a return he remains out for the time being.

• Wide receiver Tyler Lockett had a scary moment when he landed hard on the ground after leaping to make a catch in the end zone. Lockett remained down for a little while but was able to walk off the field. Carroll said Lockett just got the wind knocked out of him.

• Carroll said tight end Justin Johnson, who was carted off the field, may have suffered an Achilles injury. Johnson signed with Seattle in May as an undrafted rookie free agent out of Mississippi State.

• Duane Brown was absent for a personal reason.