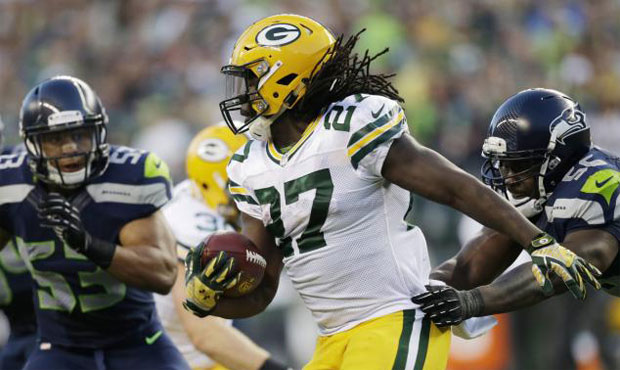 The Seahawks know what a load Eddie Lacy can be, having faced him when he was a Packer. (AP)
(AP)
Share

Eddie Lacy’s one-year contract with the Seahawks included payments tied to his weight, which makes it clear Seattle doesn’t want its new running back carrying too much of a load.

So far, so good. Lacy has made every weigh-in, according to coach Pete Carroll, and the free-agent addition from Green Bay has shown no trouble adapting to the Seahawks’ offense.

“He’s in shape,” Carroll said. “You can see him run around here. You can see him execute the stuff. He understands the offense, the running schemes that we employ. Just keep working. I have no problem. He’s going to be fine.”

The weight clauses in Lacy’s contract are actually bonuses worth a total of $385,000. Lacy has seven separate weigh-ins on designated dates and will be paid a $55,000 if he is at or below or certain weight. The most recent was 250 pounds at the start of training camp. The next formal weigh-in is in September, and Lacy will have to be at 245 pounds or below to make the bonus.

Just don’t start thinking that Carroll wants his new running back ever to be described as svelte.

“He’s a load just like we thought,” Carroll said, “and you can see him bouncing him off guys the way that we expect. We’re not trying to make him a small back. We want him to be a big back and run big, and he’s ready to do that.”