Gallant: A look at Seahawks’ success rate in 10 trades for disgruntled players 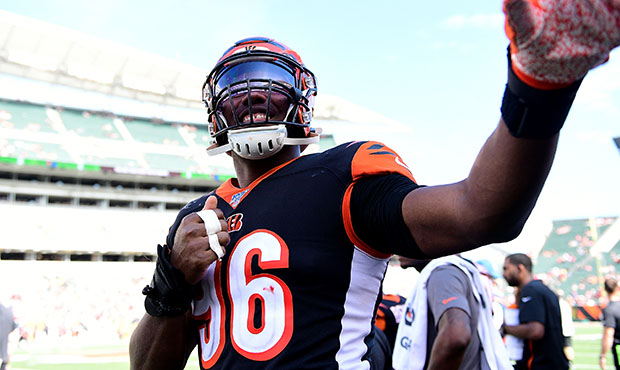 There’s your general manager. And then there’s the GM that she tells you not to worry about.

“PAWL. You sound like Steve Buscemi with a skateboard over his shoulder.”

Seahawks general manager John Schneider isn’t afraid to risk it all when he sees an in-house argument spill into the streets.

I’m thrilled about the trade. Offensive lineman B.J. Finney – who hadn’t played a down on offense – and a seventh-round pick for a 6-foot-6, 285-pound former Pro Bowler? That’s a much-needed robbery. Even if you have low expectations for Dunlap (the right mindset to have, by the way), the Seahawks have desperately needed pass-rush help since trading away Frank Clark.

Pocket change in exchange for a former Pro Bowler? What have you got to lose?

I wonder what other NFL teams think when they get a call from the 4-2-5. There’s got to be some hesitation before picking up the phone.

“Well shoot, John knows about the drama…there’s no way he’s offering much for [player x]…”

“But what happens TO ME if [player X] plays well in Seattle???”

“This situation is getting exhausting. Still, why couldn’t WE make things work with [player x]?”

Those last two thoughts have got to sting. John’s gambles on supposed malcontents haven’t always worked out. But when they do, a GM in a no-win scenario loses twice.

Let’s take a trip down memory lane. How many of Schneider’s bets paid off?

• How bad did things get in Cincy? He was seen arguing with defensive coordinator Lou Anarumo at the end of last Sunday’s loss to the Browns, and then put his house up for sale moments after the game ended.

• Was the trade a success? TBD

• How bad did things get in New York? VERY bad, even by Jets standards. It started with trade rumors to the Cowboys during the ’19 season. By the end of his time in New York, Adams requested a trade, said goodbye to his teammates on social media, dumped on head coach Adam Gase via the newspaper, and did the same to owner Woody Johnson on Twitter.

• Was the trade a success? TBD

• How bad did things get in Detroit? Things may have been worse there after Diggs was traded given the reaction of some of his teammates. For his part, Diggs said he had no ill will towards Detroit after leaving. He theorized that head coach Matt Patricia thought he was too vocal. And when he got his first interception with Seattle against San Francisco, he told former teammate Glover Quin that he walked up to the camera saying “They (the Lions) said I was trash! … They got rid of me because I was slacking, I lost it.”

• Was the trade a success? He was a Pro Bowl Alternate last season. Thus far? Yes. But I’d like to see more of the play he brought to the table last year. Maybe that interception of Kyler Murray will spark it.

• How bad did things get in Houston? Clowney was going to play under the franchise tag for Houston in ’19. But when he found out that the Texans had tried to trade him to Miami, he refused and threatened to sit out the entire preseason. Miami backed out of the deal and Houston had ruined its relationship with him.

• Was the trade a success? Clowney didn’t record the amount of sacks you’d like to see out of a primary pass rusher, but he was a disruptive force that made a number of huge plays. I think a third-round pick is worth a one-year rental of his caliber.

• How bad did things get in Houston? Brown had held out as long as he possibly could in 2017 hoping for a contract extension. The week he returned to practice, Texans owner Bob McNair was revealed to have said that NFL owners “can’t have the inmates running the prison” during conversations about how to handle protests during the national anthem. Duane was done.

• Was the trade a success? Yup. Brown has been the Seahawks’ most reliable offensive lineman for the last 3 1/2 seasons.

• How bad did things get in New York? Richardson made his own mess in New York. He was suspended twice, had a feud with teammate Brandon Marshall, and was considered a bad fit in the Jets’ locker room.

• Was the trade a success? Nope. The 2013 Defensive Rookie of the Year was a… Shel… of himself during his lone season in Seattle, recording just one sack. That’s not nearly enough of a return for a clutch receiver and a second-round pick.

• Trade terms: Seattle traded center Max Unger and a 2015 first-round pick for Graham and a 2015 fourth.

• How bad did things get in New Orleans? After the final year of his rookie contract (2013) where he caught 86 passes for 1,215 yards and 16 TDs, the Saints gave Graham the franchise tag. New Orleans wanted to classify him as a tight end, meaning they’d only have to pay him $7.035 million over a one-year deal. Graham thought he should be classified as a receiver, making $12.3 million over the deal. And as the drama over his contract went on, Graham didn’t like hearing Drew Brees tell USA Today that the team could manage just fine without him. Graham did sign a long-term extension with New Orleans later that offseason making him the highest-paid tight end in the league, but the following offseason he was traded to Seattle. I wonder if that back and forth made it easier for New Orleans to move on from him.

• Was the trade a success? Statistically? Yes. Graham was never as good as he was in ’13 again, but he did put up prolific numbers. But as a fit? No. The Seahawks wanted Graham to be more like a traditional tight end and block. And he’s not that kind of tight end. Overall, I’ll say yes. At the very least, he brought more to the table than Richardson and the next guy on the list.

• How bad did things get in Minnesota? Percy once reportedly threw a weight at head coach Brad Childress. He got in a shouting match with his next head coach, Leslie Frazier, when he was put on injured reserve. But at least he didn’t fight any teammates?

• Was the trade a success? That depends on who you ask. If you think Percy’s second half kick return clinched Super Bowl 48 for the Seahawks, then yeah! But if you think playing just eight games (regular season and playoffs), fighting Golden Tate, fighting Doug Baldwin, and pulling himself out of a game against the Cowboys are bad, it’s a resounding no. I’m with the latter camp.

• How bad did things get in Buffalo? Lynch dealt with some legal issues in Buffalo – a 2008 hit and run and a misdemeanor weapons charge in 2009 – but by all accounts was a great teammate. That said, he reportedly didn’t like living in Buffalo. And it’s hard to imagine he enjoyed losing his starting job to Fred Jackson in 2009, not to mention seeing C.J. Spiller drafted ninth overall in 2010.

• Was the trade a success? Thanks for asking.

• How bad did things get in Philly? It’s not that they got bad. They just changed… dramatically. He signed a five-year contract with Philadelphia in 2008, but the following offseason, defensive coordinator Jim Johnson – who saw him as a player who could be used in a variety of different ways – died. Clemons’ role diminished in 2009 under Johnson’s replacement, Sean McDermott, and he was traded before the 2010 season. To his credit, Clemons said he wasn’t frustrated while in Philadelphia. Still, who likes sitting on the bench?

• Was the trade a success? Absolutely. After just 20 sacks in five seasons before being traded to Seattle, Clemons racked up 40 over four years with the ‘Hawks. One of those 40 came in Super Bowl 48.

Close
Gallant: A look at Seahawks’ success rate in 10 trades for disgruntled players