Gallant: Why did Metcalf fall to Hawks in the draft? Everybody was wrong 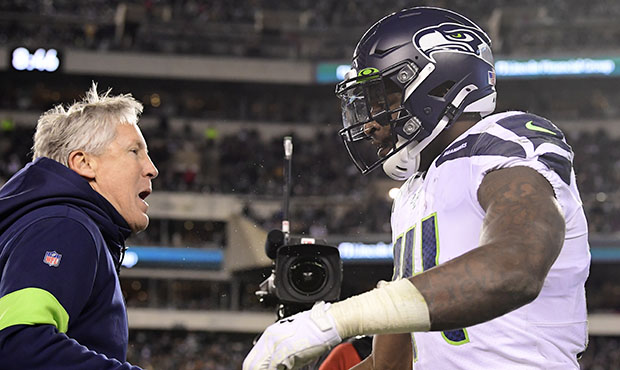 DK Metcalf fell to the Seahawks in the second round of the 2019 NFL Draft. (Getty)
(Getty)
Share

Our life experiences make us who we are. The good. The bad. The happy. The sad. I’m too lazy to keep rhyming, so hopefully you get my point. So let’s go back in time to an important night that shaped the life of the best player on the field Sunday in Philadelphia: April 25, 2019.

By the Numbers: Hawks’ pass rush revived in playoff win over Eagles

DK Metcalf was a viral sensation heading into that night. The Ole Miss wide receiver wasn’t a household name during his redshirt sophomore season in Oxford. But by the end of February, everyone who followed football knew who he was. It could have been because he looked like a character straight out of a 1990s DC Superhero cartoon before the NFL Combine. Or because the 6-foot-3, 228-pound dreadnought ran a casual 4.33 40 at said combine, and also had an impressive vertical and broad jump.

It wasn’t a perfect combine. I, like many others, was struck by Metcalf’s poor agility scores (a 7.38 3-cone drill and a 4.5 short shuttle, both of which are considered slow). And given that his play wasn’t discussed often during the season, I wondered if he was anything more than a workout marvel that could make the late Al Davis drool.

Back to April 25. DK went to Nashville for the 2018 NFL Draft, and probably believed, like 22 others in attendance, he’d be a first-round pick. But it didn’t happen. And as the number of players in the room with him slowly dwindled down to five by the end of the draft’s first round, it must have killed him.

Why did he fall that far? Who knows. Sunday Night Football color analyst Cris Collinsworth, who said he thought Metcalf would be the seventh overall pick, surmised that maybe he’d fallen because he didn’t have a great work ethic. Until meeting him, he admitted he’d wondered if Metcalf was a jerk. Something had to be wrong with him for him to fall so far, right?

Metcalf wasn’t done falling. It took until the very end of the second round for the juggernaut to finally find a home, when the Seahawks traded picks 77 and 118 to the Patriots to take him with the 64th pick. And then this amazing moment happened.

Is it just us or is it getting dusty in here?

I enjoy the conversations that we have on 710 ESPN Seattle’s Danny and Gallant with Pete Carroll at 9:30 a.m. the morning after every Seahawks game. And when we asked Pete about Metcalf’s impressive rookie year, I remember the head coach telling us about the chip on Metcalf’s shoulder. That he’s hungry to prove himself.

Sunday? He did exactly that. He had seven catches for 160 yards, including a 53-yard touchdown reception. He would have had 75 more and another touchdown if Russell Wilson didn’t overthrow him here.

A lot of people might not have handled that April disappointment the way the Metcalf has this season. Instead, he turned it into fuel, single-handedly winning his first career playoff game and becoming arguably the best rookie receiver in the game (his Ole Miss teammate A.J. Brown deserves honorable mention).

I couldn’t be happier for him.

• Russell Wilson looked like the MVP. He threw some gorgeous passes downfield to Metcalf and Tyler Lockett. And in a game with almost no support on the ground, he was Seattle’s rushing offense. More on that later. If he can keep this up for the rest of the playoffs, the Seahawks have a chance at a title.

• Winning a road playoff game is impressive, no matter who the opponent is, and style points don’t matter. But it’s clear that the Hawks had a massive advantage in terms of healthy bodies. They overwhelmed Philadelphia’s duct tape and rubber band-bound offensive line with seven sacks. That’s an amazing total and something we’ve only seen Seattle allow this year. I doubt we’ll see a dominant performance from the pass rush like that the rest of the playoffs, though.

• The game completely changed when Jadeveon Clowney took out Carson Wentz with a hit from behind that’ll likely draw a fine. Was Clowney trying to knock him out of the game? I doubt it. But Clowney seems to relish punishing quarterbacks. Just ask Nick Foles about it. He had an opportunity and he took it. We had no problem with defenders having that mindset decades ago. Do we have a problem with it now? I don’t.

• The Seahawks had no running game Sunday. Yeah, Wilson had some nice scrambles and led the team with 45 yards, but Travis Homer and Marshawn Lynch combined for 19 yards on 17 carries. The Eagles’ front seven is pretty stout so it’s somewhat understandable, but that’ll need to change next week. Maybe a healthy Mike Iupati and Duane Brown can change that.

• The Eagles, meanwhile, were effective on the ground. They ran it 26 times for 120 yards despite having Josh McCown under center, and the Philadelphia run game made the Seahawks look quite slow on the edge.

• Penalties were a massive problem in this one. Seattle was penalized 11 times for a whopping 114 yards, 58 of those yards coming from two pass interference calls on Tre Flowers, who didn’t play great. Germain Ifedi was called for a false start. Jacob Hollister moved early twice. Clowney had one of his trademark offsides. And the Seahawks were called for another delay of game (this time at least outside of the red zone) and had to burn a last-second timeout to stop another one. The slop will need to be cleaned up against a much healthier Packers team next week.

Close
Gallant: Why did Metcalf fall to Hawks in the draft? Everybody was wrong