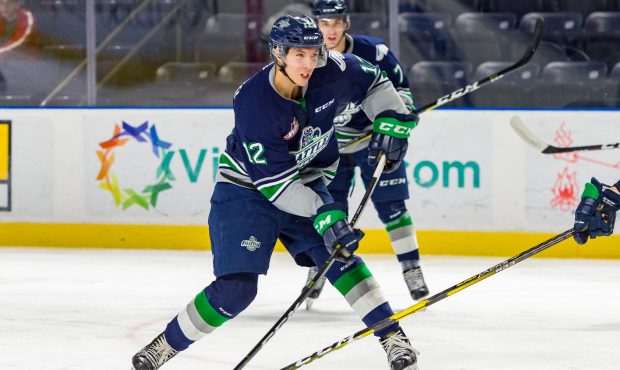 KENT – After missing all training camp due to an illness, Thunderbirds forward Henrik Rybinski was back on the ice Saturday and showed no effects of the layoff.

He assisted on three goals for Team Blue as they won the annual Blue-White game by a 6-3 score. Rybinski played on a line with Conner Roulette, who also had three assists, and Winter Wallace, who scored a goal in the win.

Brecon Wood scored twice for Team White but Blue goalie Tomas Milic held the fort against a Team White that poured 53 shots at the Blue net.

Next up for the Thunderbirds is a week of practice before three games in Everett as part of the Preseason Holiday Tournament. Seattle will play the defending Western Conference Champion Vancouver Giants Friday, at 11 am, in the Angel of the Winds Arena.

With the training camp portion of Seattle’s preseason in the books, the final decision on the forward group remains unanswered.

As of Saturday night, 21 signed forwards are still on the roster, who are eligible to play this season. Seattle has carried 14 or 15 in the past so the next three weeks will be crucial for some guys.

“The evaluation process is ongoing,” Seattle head coach Matt O’Dette said on Saturday. “We’re going to get a close look at these guys in practice this week. Obviously, the preseason games will tell a big story. Everyone will have an opportunity to play in those games, some guys more than others, but we have such a good up and coming group of guys up front that it will make for some tough decisions.”

Practice starts Monday, and while it’s easy to get enamored by players who stood out in scrimmages that were completed during the week, they aren’t necessarily a true mark of where a player is in the pecking order.

A week of practice and then six preseason games will give O’Dette and general manager Bil La Forge a better feel for who they want to keep on the roster.

“Practice is important,” O’Dette said. “I think you can see guys on ice level and up close. See how they react to drills and some of the systems stuff we’ll be introducing… Then I think when the live bullets start flying around and you’re playing opposition and you have a group of kids on the other side trying to make their team, the intensity will pick up even more.”

It’s too early for O’Dette to say who is a lock and who isn’t, and the team doesn’t have an easy task ahead as all the forwards make a strong case to be on the team.

Matthew Wedman will make the team, assuming he is returned by the Florida Panthers. Wedman, 20, was selected in the seventh round of June’s NHL Draft by Florida and would be eligible to play in the AHL this coming season.

If Wedman does return he’ll take one of the overage spots, along with Kukuca. That means one of Jaxan Kaluski, Conner Bruggen-Cate, or Baron Thompson can stay with the team.

That leaves 13 players fighting for the remaining forwards positions.

Of the 21 signed forwards still in camp, three are 19 years old, three more are 18 and three who make the roster will be 20. That means young guys will be in the mix. Will Seattle prefer to keep older players instead of younger players?

“We want to put the best team we can on the ice with keeping in mind that we’re trying to develop some of our younger guys,” O’Dette said. “To be honest, the gap among some of these young guys isn’t very big. The young guys are clipping the heels of some of these older guys.”

Seattle is set in net with Roddy Ross and Blake Lyda but has six defensemen who are now signed — they will need seven. A move will be needed to pick up another blueliner before the season gets underway. That move could be signing a player or could involve a trade of one of the surplus forwards, which would make the decision about whom to keep clearer.

Hours before the Blue-White game the Thunderbirds 15 and 16-year-old prospects played a futures game at the accesso ShoWare Center.

Team Blue won 6-2 highlighted by an impressive toe-drag score from right-winger Carter Yarish. The free-agent camp invite had a good week. Yarish is from Prince George, B.C. and played last season for the Yale Academy in Vancouver.