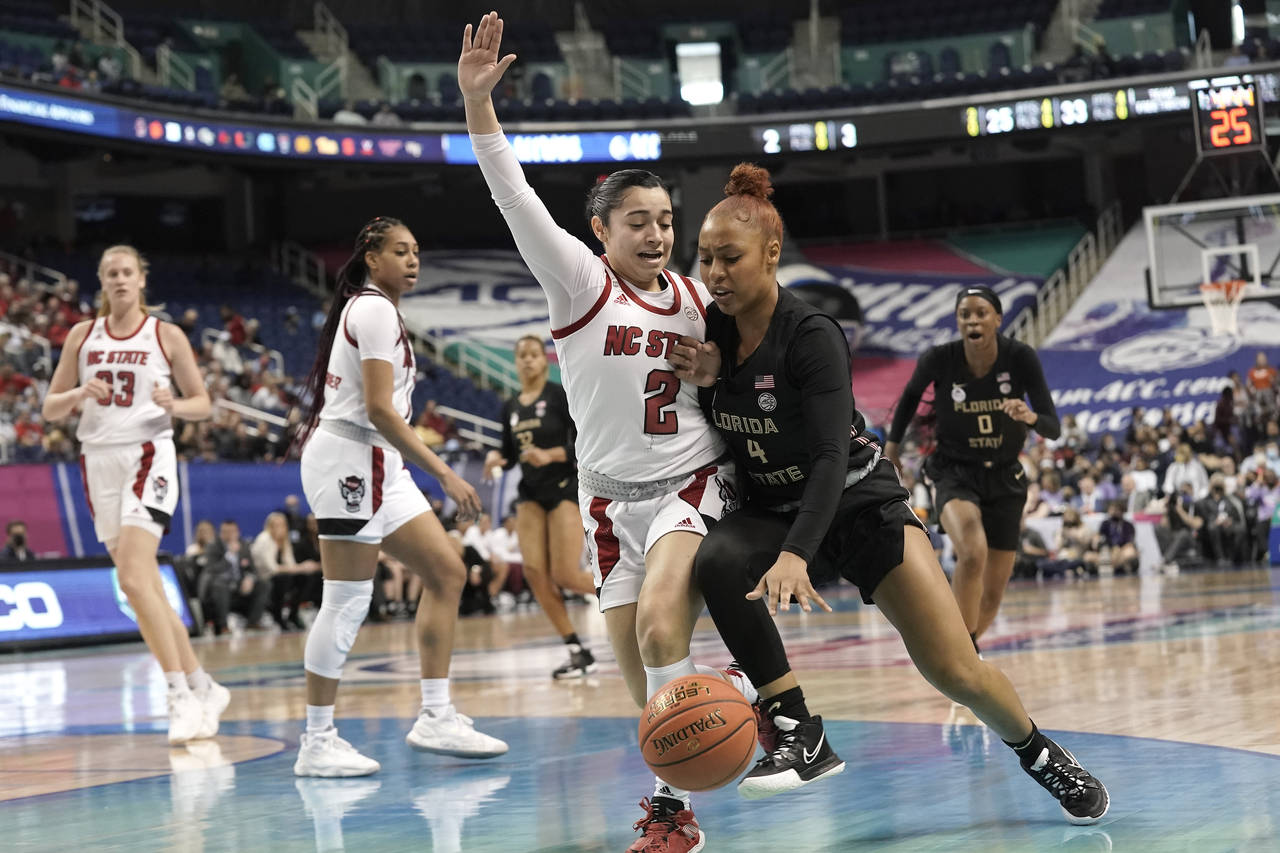 GREENSBORO, N.C. (AP) — There are times when third-ranked North Carolina State hits an offensive groove with the points coming in an easy flow and from just about anywhere in its lineup.

The junior scored nine of her 15 points during a dominating third-quarter performance, helping the N.C. State beat Florida State 84-54 in the quarterfinals. It was her latest strong outing as the Wolfpack won an eighth straight game with 10 different players cracking the scorebook.

“Having veterans like this, they came out ready to play and got us off to a good start,” coach Wes Moore said of Brown-Turner and Elissa Cunane.

“I thought pretty much everyone contributed that went in there and did a nice job. And that’s important also, to be able to save the legs a little bit by rotating and getting some depth in there,” he said.

Cunane also scored 15 points for the Wolfpack while Jada Boyd added another 12 off the bench. N.C. State also repeatedly capitalized off mistakes by the ninth-seeded Seminoles (17-13), scoring 21 points off 15 turnovers while FSU didn’t manage any points off turnovers until the final minutes with the game long since decided.

“I think today our defense turned into offense a lot,” said the 6-foot-5 Cunane, who got two first-quarter steals for the early chance to run the break. “We were getting steals, getting in passing lanes, and just getting rebounds and being able to push it.”

The Wolfpack has had some notable flurries this season. A fourth-quarter avalanche led by Diamond Johnson to rally past No. 4 Louisville. An incredible fourth quarter at Duke in which the Wolfpack missed one shot through the entire period.

This time, the tournament’s top seed scored on seven of eight possessions out of halftime, turning a 36-23 lead into a 22-point margin by midway through the period.

“There’s so many different weapons that they have,” she said. “Really you can’t pick and choose. You have to do a great job all the way around, and we were not up for the task today.”

Sara Bejedi scored a career-best 21 points to lead Florida State, a big leap from her season average of 5.8 points. FSU shot 38% and had no other player reach double figures, which made it impossible to keep up once the Wolfpack got rolling.

FSU: The Seminoles arrived in Greensboro having finished strong with six wins in eight games, and they stood among the first four teams outside the projected 68-team NCAA Tournament field as of Tuesday morning. But they beat fellow bubble team Boston College in Thursday’s second round to help their case, and Semrau said she thought her team has done enough to secure an NCAA bid.

N.C. State: The Wolfpack claimed the program’s first league regular-season championship since 1990 to earn the No. 1 seed. Moore’s squad is also almost certain to earn a No. 1 seed in the NCAA Tournament for the second straight year. The depth of scoring options is a big reason why, with Brown-Turner, Cunane and Boyd taking over while Johnson (3 of 13) had a rough shooting performance as the team’s No. 2 scorer.

Brown-Turner powered that third-quarter surge with her aggressiveness off the dribble. She drove to the rim for a score 15 seconds into the third, then put her head down and attacked again while running right by a post-up from Cunane that ended up screening two defenders.

She followed that by calmly pulling up off the dribble in the lane for a jumper, then finding Kai Crutchfield for a 3-pointer that pushed the lead to 52-30 with 5:20 left.

She also completed a gorgeous passing sequence that began with Johnson in the right corner, then Boyd near the top and finally Brown-Turner for a left-corner 3-pointer.

it marked her ninth double-digit scoring output in the last 12 games against league opponents after averaging 6.9 points through the first seven.

“(Opponents) know she’s a great shooter,” Moore said. “They were doing a great job of getting to her and she sometimes was getting a little out of control, rushing things. She’s slowed down, the game slowed down.”

FSU: The Seminoles must await their postseason fate.

N.C. State: The Wolfpack will take on the Hokies, who beat No. 16 North Carolina in overtime Friday. MILWAUKEE (AP) — The St. Louis Cardinals finally separated themselves from the Milwaukee Brewers in early August after chasing them for much of the season. They haven’t looked back since, turning what had been a nip-and-tuck NL Central race into something of a runaway. MVP contender Paul Goldschmidt went 2 for 4 with a pair […]