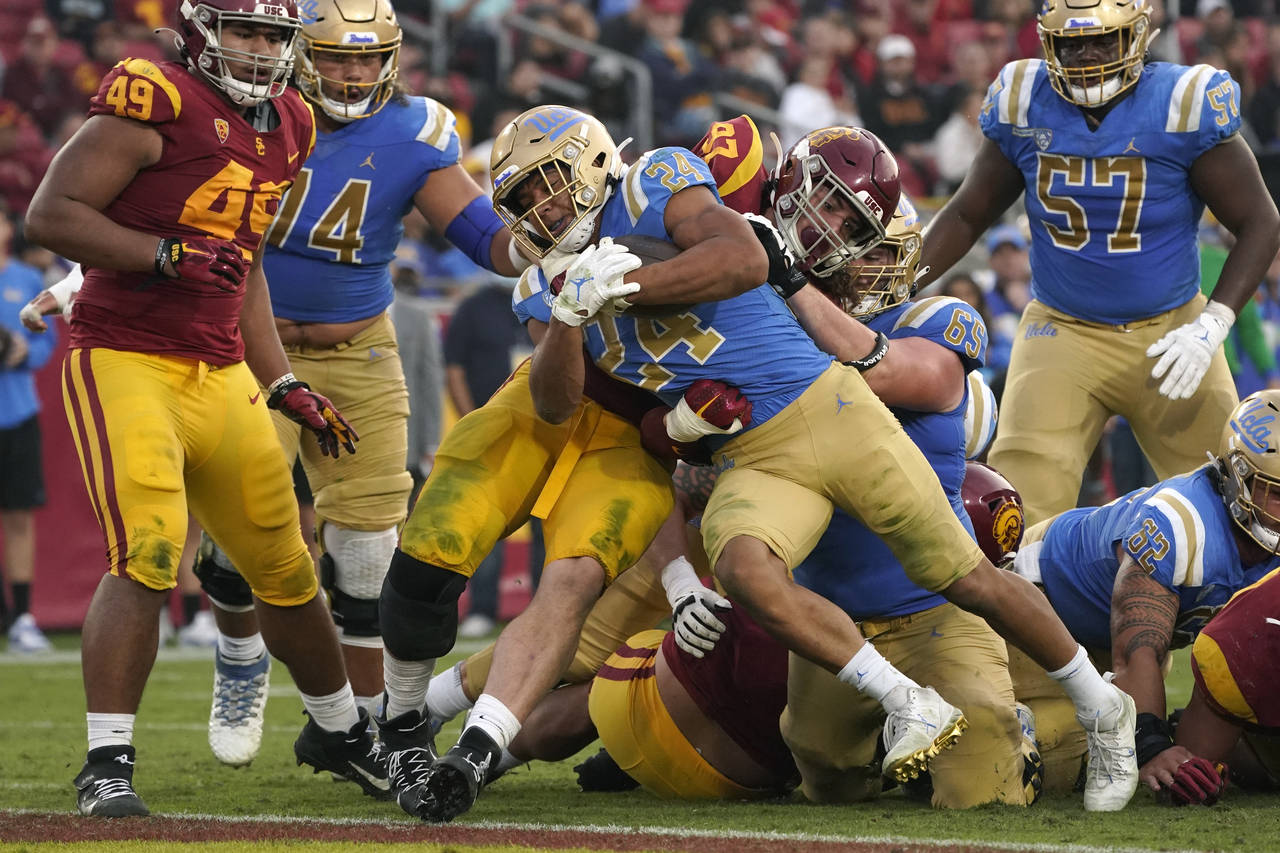 FILE - UCLA running back Zach Charbonnet (24) runs the ball in for a touch down as Southern California defensive lineman Jacob Lichtenstein (97) tries to stop him during the second half of an NCAA college football game Saturday, Nov. 20, 2021, in Los Angeles. An advocacy group for college athletes has filed a complaint with the National Labor Relations board in the next step in a push to give employee status to college athletes and afford them the right to competitive pay, collective bargaining and other benefits and protections. The National College Players Association on Tuesday, Feb. 8, 2022 filed the unfair labor practice charges against the NCAA, Pac-12 Conference, UCLA and the University of Southern California (AP Photo/Mark J. Terrill, File)

An advocacy group filed a complaint with the National Labor Relations Board on Tuesday, the latest step in a push to give employee status to college athletes and afford them the right to competitive pay, collective bargaining and other benefits and protections.

The National College Players Association filed the unfair labor practice charges against the NCAA, Pac-12 Conference, UCLA and the University of Southern California as single and joint employers of Bowl Subdivision football players and Division I men’s and women’s basketball players.

“College athletes meet the definition of employee under labor law,” said Ramogi Huma, the NCPA executive director and a former linebacker for UCLA. “They are highly skilled in their sport, paid scholarships and stipends to perform athletic services, and they perform their work under extensive control of their employer. These athletes deserve every right afforded to them under labor laws — just like other hard-working Americans.”

The NCPA’s move comes about four months after the NLRB’s general counsel, Jennifer Abruzzo, wrote in a memo to NLRB field offices that in her view college athletes who earn millions for their schools are employees.

The guidance had been expected to lead to a fresh challenge of college sports’ longtime view that athletes are amateurs who are not eligible for benefits afforded employees.

“This is a logical consequence of Ms. Abruzzo putting out her memo,” said Michael LeRoy, professor in the School of Labor and Employment Relations at the University of Illinois. “The general counsel has really provided a blueprint for how to file a successful complaint.”

An NLRB spokeswoman said Abruzzo would not comment on the NCPA’s filing because it is an active case. The NCAA, Pac-12 and UCLA declined comment. USC said it was aware of the charge and reviewing it.

Ramogi said the NCPA’s charges were bolstered by a unanimous U.S. Supreme Court decision in June that found the NCAA’s limits on the education-related benefits violate antitrust laws. That decision has already led to sweeping changes across the NCAA and its nearly 500,000 athletes, including their ability to now earn money based on their celebrity.

LeRoy said between the NLRB process and possible appeals in federal courts, it could take three or four years for the unfair labor practice charge to be adjudicated.

Including only athletes in revenue sports is an important distinction, Huma said, because Abruzzo’s memo referenced Northwestern football players’ unsuccessful effort to form a union and said those players, and other “similarly situated” athletes, qualify as employees.

“We’re not against other athletes pursuing employee status,” Huma said. “(But) FBS football and Division I basketball players are all similar in that they are the only college athletes that are paid full scholarships and receive less than their fair market value.”

“We know the industry can afford to treat FBS football and Division I basketball players as employees,” he said. He added that schools might eliminate non-revenue sports if all Division I athletes were considered employees.

Huma said fairly compensating FBS football and Division I basketball players is a matter of economic and racial justice. Black athletes make up a majority of rosters in those sports and, he said, “face a disparate impact from NCAA sports’ illegal compensation prohibition.”

“If athletes immediately unionized without a willingness to withhold their labor, they would be pushed into a bad CBA,” Huma said. “Athletes will wield the most leverage toward a fair agreement by first establishing employee status, which will lead toward free market wages.”

The NCPA is based in Southern California and chose to bring unfair labor practice charges against both UCLA and USC so a ruling can apply to both athletes at public (UCLA) and private (USC) schools. Huma said he expects the Los Angeles NLRB field office to handle the case.

The NCPA also has sponsored a legislative bill in California that would pay college athletes fair market compensation, create state enforcement of Title IX gender-equity laws and preserve all sports.

“It complements our NLRB effort well,” he said. BOSTON (AP) — Michael Wacha allowed two hits in seven innings in his return from a shoulder injury, and Rafael Devers homered on Sunday night to lead the last-place Boston Red Sox past the division-leading New York Yankees 3-0. Tommy Pham had three hits for the Red Sox, who took two of three from New […] EDMONTON, Alberta (AP) — Ralfs Bergmanis had a hat trick and Latvia beat the Czech Republic 5-2 on Sunday to secure a quarterfinal spot in the world junior championship. Latvia (1-2-1) was third in Group A, a spot ahead of the Czech Republic (1-2-1). Latvia got into the event when Russia and Belarus were expelled. […] SAN FRANCISCO (AP) — Thairo Estrada hit a two-run homer with one out in the ninth inning and the San Francisco Giants edged the Pittsburgh Pirates 8-7 in a back-and-forth game Sunday. Evan Longoria, whose wild throw gave Pittsburgh the go-ahead run in the top of the ninth, started the rally in the bottom half […] LAS VEGAS (AP) — One of the biggest questions facing Las Vegas Raiders first-year coach Josh McDaniels was where he would find the right pieces for his offensive line. McDaniels may not have all the answers after a 26-20 preseason win over the Minnesota Vikings on Sunday, but he’s pleased with what he’s seen in […]