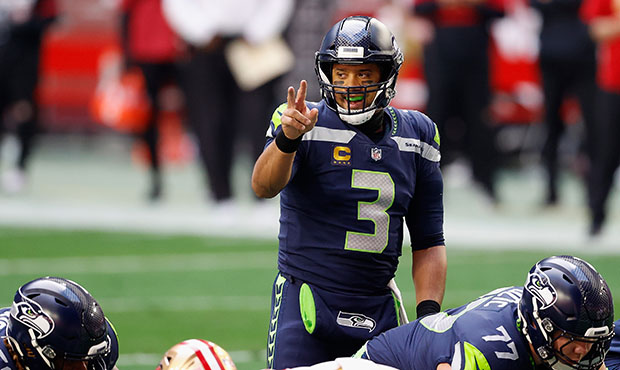 This is as close as Russell Wilson has come to throwing a fit in his time as a member of the Seahawks.

A fairly mild and exceedingly polite fit, but this is Russell Wilson we’re talking about, so that’s to be expected. For nine years he’s almost entirely refrained from saying absolutely anything that could be mistaken for being controversial or even critical, and it’s that relatively bland backdrop that makes his abrupt entrance into the NFL news cycle seem almost scandalous.

1. On Sunday – before the Super Bowl – the NFL Network’s Ian Rapoport mentioned that several teams had asked the Seahawks if Russell Wilson might be available in a trade. Rapoport cited these inquiries as evidence of how crazy quarterback speculation had gotten in the league that teams were reaching out to see if a player as good as Wilson is – with three years left on his contract – was on the market.

2. This report spurred Jason La Canfora, of CBS Sports, to look at potential destinations were Wilson to be traded. Then Monday night, he offered a more ominous overview of the situation: “I’m hearing Russell Wilson’s camp has grown increasingly frustrated by the Seahawks inability to protect the 8 time Pro Bowler. He has been sacked 394 times in 9 seasons. This situation warrants serious monitoring.”

3. On Tuesday <strike>Wednesday</strike> morning, Wilson was a guest on the “The Dan Patrick Show” where he expressed the desire to be involved with personnel decisions and brushed off an inquiry over whether he was available by saying that was a question for the Seahawks though in fairness, he later said he wanted to be a Seahawk forever. And then, in a press conference for being named the NFL’s Man of the Year, he was asked if he was frustrated by anything with the Seahawks, he said, “I’m frustrated with getting hit too much.”

Well, maybe he shouldn’t hold onto the ball so long then.

That’s probably not the response Seattle’s quarterback was aiming, but that’s part of the problem when you start to point fingers. Other people will point back, and while it doesn’t matter what somebody like me says in the Seattle locker room, it does matter how Wilson’s teammates feel about his observations about the need to shore things up.

And if this is a time for hard truths, then let’s talk honestly about what happened the final two months of the season when the offense absolutely sputtered, and it wasn’t because the Seahawks started running the ball more. They were still looking to pass on almost two-thirds of their plays, and while I’m not going to go so far as to say that he was bad, he wasn’t great, either. He was picked off only three times in the final seven games, but his best passing total in that span was 263 yards. The only time he threw more than two touchdown passes in a game was his four-score binge against the Jets.

These are the sort of conversations that finger-pointing engenders, and I’m not sure what that sort of public autopsy will accomplish other than create some unnecessary antagonism.

This brings me to the biggest question I have after hearing from Wilson on Tuesday: Why? What’s his goal here? And don’t give me that line about him just answering the questions being posed to him. I’ve listened to Wilson long enough to know that he is fully capable of offering an absolutely uninteresting answer to any question that gets posed to him.

Is he seeking greater input when it comes to personnel decisions? If so, do you really want the quarterback who makes more money than anyone else on the team deciding where the rest of the payroll goes?

Or is this a warning shot to let Seattle know that there are some problems that the quarterback wants fixed ASAP? If so, how does the quarterback explain some of the questions about his play over the final two months of the season?

Or maybe this is just the final death rattle after a season that concluded with the most disappointing playoff loss in Wilson’s career and the quarterback is acting out just a bit. Hopefully, Seattle’s employee No. 3 has gotten it out of his system.