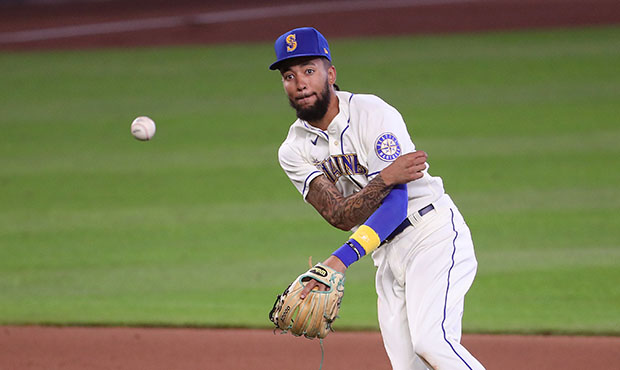 As the Mariners have gone about the process of rebuilding from the ground up, defense has been a priority. Tuesday night, two young core players were rewarded for their performance with their gloves.

M’s infield coach Hill on what makes Crawford, White special in the field

Evan White and J.P. Crawford received the American League Gold Glove Awards at first base and shortstop, respectively. The two join Ken Griffey Jr. as the only Mariners players to win the award in their 25-year-old season or younger.

Both winners were on 710 ESPN Seattle’s airwaves Wednesday along with the coach most closely related to their defensive success. White joined Danny and Gallant in the morning (listen here or in the player below), Crawford talked in the afternoon with Bob, Dave and Moore (listen here), and Mariners infield coach Perry Hill joined Tom, Jake and Stacy (listen here).

White, 24, bested Houston’s Yuli Gurriel and Oakland’s Matt Olson to earn his first Gold Glove. He led AL first basemen in 2020 with 7 defensive runs saved and ranked first in scoops (seven), out of zone plays (11), second in UZR (2.2) according to FanGraphs, and third in fielding percentage (.998). He was just behind Gurriel and Olson, who also had .998 fielding percentages.

White ended the season with 49 consecutive games without an error, successfully converting 363 total chances over that span. According to Baseball Savant, he tied for the most runs prevented (2) among AL first basemen while ranking tied for second in outs above average (2) behind only Olson (3).

“It was definitely awesome, definitely a dream come true,” White said on a media video call Tuesday night shortly after learning he had won the award. “It’s something I take a lot of pride in and to see that rewarded is really special, and also to see J.P. and all the work he has put in, to see him get rewarded the way he did by winning as well was incredible and really cool for us to share our first one together.”

White becomes the second Mariners first baseman to win the award. John Olerud won Gold Gloves in a Mariners uniform in 2000, 2002 and 2003.

Crawford, 25, beat out Houston’s Carlos Correa and Detroit’s Niko Goodrum to take the honors to become the second Mariners shortstop in team history to win the award. Omar Vizquel is the other, taking the honor in 1993.

While White reached the major leagues with the reputation of being a great defender at his position, Crawford grew into that reputation at the big league level. After working with Mariners infield coach Perry Hill before his first spring training with the Mariners and fixing his footwork, Crawford saw the potential to take his performance to Gold Glove level.

“It’s such a relief just to finally see all of those hours of work finally pay off,” Crawford said Tuesday night. “Just to know that I’m heading in the right direction and I have a shot to be right there with the top of all of the shortstops in the league. The work doesn’t stop here I have just got to continue to get better and continue doing what I am doing to get ready for next year.”

White and Crawford are the first duo to win Gold Gloves for the Mariners since 2010 when Ichiro and Franklin Gutierrez both came away with awards. Hill, who prior to coming to the Mariners had players collect the honor eight times, is thrilled to see the work pay off.

“It’s really gratifying for all of our players to get some recognition for the hard work they put in, because a lot of people don’t see what happens at 2, 2:30 when nobody is at the ballpark,” he said. “All of our players have been like that but I am extremely pleased for J.P. and Evan. Both of them have worked extremely hard and I’m ecstatic they are getting the national recognition they deserve.”

The recognition in the COVID-shortened 2020 season came via a different path. Since 2013, a statistical component, the SABR Defensive Index – or SDI – was included in the final determination of award winners. Due to the compressed season this year, the award qualifications have been amended to rely solely on the SDI, which utilizes MLBAM’s Statcast, Sports Information Solutions data, and STATS data, as well as traditional statistics with advanced analysis.

To see the final SDI rankings for the top fielders of the 2020 MLB season, click here.