Brent Stecker is Editor of 710Sports.com, a role he has held since September 2017. A native of Ephrata, Wash., he joined the 710 ESPN Seattle and MyNorthwest.com team in 2013 after six years as a sports reporter for The Wenatchee World. When not working, he can be found playing guitar with his band on stages in Ballard and Capitol Hill or showing his staunch support for fundamental defense in the outfield on Twitter. Follow Brent: @BrentStecker

The Mariners have their shortstop, so why would they be interested in one of the big name free agent shortstops? Jerry Dipoto sheds some light.

Washington State University has terminated the contract of WSU Cougars football coach Nick Rolovich due to his refusal to receive a COVID-19 vaccine. Seahawks have talked to Cam Newton, according to Pete Carroll The Seahawks put up a fight in their first game with Russell Wilson on injured reserve, but they fell 23-20 in OT to the Steelers on Sunday night and will come home to Seattle with a 2-4 record on the season. Salk: Important answers about Seahawks are coming with Russell Wilson out

"Putting Geno Smith in as a starter actually helps me learn a lot more about the Seahawks," Mike Salk said about Seattle playing minus Russell Wilson. The first NHL game in Seattle Kraken history brought the excitement. It didn't come with a win for the expansion team, however. The Seattle Kraken have begun their first season in the NHL. Get a look at the action with a photo gallery from Tuesday's game against Vegas. The 2-3 Seattle Seahawks are at a turning point in their 2021 NFL campaign, and they're making waves entering Week 6 of the season. Seahawks QB Russell Wilson's finger injury may keep him from making not just one start but several starts for the first time in his career. Thursday Night Football usually brings out the weirdest games of the NFL season, and that was certainly the case for the Seahawks in Week 5. Photos: Seahawks back in Action Green for Thursday Night Football vs Rams

It's the most polarizing time of the Seahawks season – the annual return of Seattle's Action Green uniforms on Thursday Night Football. 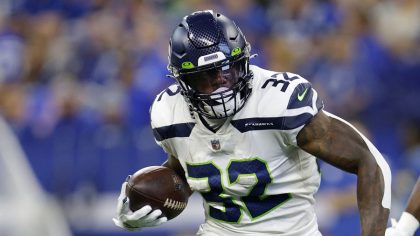 An ongoing neck issue for Chris Carson will leave the Seahawks without their top running back on Thursday night against the Rams. If the Rams have one advantage over the Seahawks on Thursday night, its their pass protection against Seattle's pass rush.

The 90-win Mariners scored less runs than any other team with a winning record in 2021. On the Scott Servais Show, Seattle's manager spoke about how the M's will address their offense.

Chris Carson has been ruled questionable for the Seahawks' Thursday night game vs. the Rams, and while his neck issue apparently isn't new, the news about it is. A pair of offensive players played important roles in the Seahawks coming back to beat the 49ers. Michael Bumpus breaks down what he saw from Russell Wilson and Alex Collins.