Seahawks still in position for title defense, but it won’t be easy 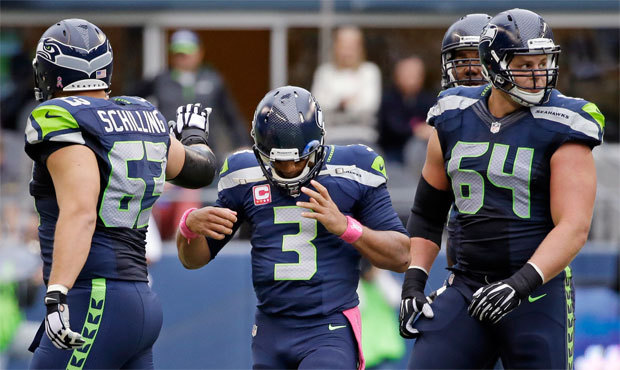 After their early-season struggles, the Seahawks have a tough road ahead in the second half. (AP)
(AP)
Share

The NFL is half-way home after eight weeks and has proven yet again how it keeps all of us coming back for more.

Everyone assumed that the Broncos would contend, but how many thought the Cardinals would be the lone one-loss team in the NFC at this point? Who would’ve guessed that the best defense in the league would be three time zones from Seattle in Detroit? Did anyone know the NFC South would be a stinkfest where a three-win team would be in first place?

The NFL deals in intrigue better than any other sports entity and has provided plenty of drama through the first half of the season. Better still, for every surprise of through the first eight weeks there’s an unanswered question for the remaining schedule.

Those remaining questions bring me to the Seahawks.

Among the surprises of the first half have been the struggles here in Seattle. A 4-3 team that manages to throttle Green Bay and hands Denver its only loss but cannot beat the one-win Rams. A team that spent so much of last year galvanized against the doubts of the outside world is learning to live with the weight of expectations that follow a championship season. Seattle has stumbled a bit coming out of the gates, but regardless of what you attribute those stumbles to, the Seahawks have not fallen and can now take stock for a stretch run with their goals still intact.

First and foremost, there are the games. The Seahawks have a brutal stretch starting in late November and that only puts more emphasis on the challenges of the next two weeks. The winless Raiders are in town and, unlike when the winless Bucs gave Seattle a scare at this exact time last season, the Seahawks need to take care of business with full focus on making the worst team in football look the part. Following that, the three-win Giants comes to CenturyLink Field and, again, the Seahawks need to play the part of the much better team.

Getting to 6-3 is something players and coaches would be loathe to discuss but it’s an important mile marker with the six-week march to follow that includes games at Kansas City, vs. Arizona, at San Francisco, at Philadelphia, vs. San Francisco and vs. Arizona. The four toughest division games, the toughest road trips of the year and two games against the only team that beat the Seahawks on their home field a year ago – all in a month and a half. Get to 6-3, split those six games and this team has 10 wins – likely the minimum it will take to make the playoffs – in reach assuming they pay back the Rams at home in the regular-season finale.

Second, All Russell Everything. I wrote about this a week ago but it’s still true, the Seahawks will go as far as Russell Wilson takes them. There are still elements of the offense (paging Marshawn Lynch) that are going underused but Wilson gives the Seahawks an edge that teams cannot account for. So long as he is operating at a high level, this team has what it needs to beat anyone.

Third is the improving forecast from team doctors. The Seahawks are dealing with losses on both sides of the ball with the absences of Max Unger, Bobby Wagner, Derrick Coleman, Byron Maxwell, Jeremy Lane, Zach Miller and Jordan Hill, among others. In addition, there are key players like Russell Okung and Kam Chancellor that are playing wounded. The good news is that most of these guys are coming back and not a moment too soon. Arizona and San Francisco have weathered injury storms of their own and will be getting bodies back into the lineup just in time for that late-season NFC slugfest.

Finally, the youth. Seattle’s depth is not what it was in 2013 and the rookies have had to make contributions both offensively and defensively. Justin Britt, Paul Richardson, Kevin Norwood, Garry Gilliam, Cassius Marsh, Brock Coyle and, most recently, Kevin Pierre-Louis have logged minutes for the Seahawks that will prove valuable. The price of doing business as the world champs in the NFL means roster attrition and getting meaningful contributions from the rookie class is not the luxury it was a year ago. The new guys will have to continue to be a force for the Seahawks to get back to the postseason.

The good news is that the Seahawks, while underwhelming, can still make a charge and defend their Super Bowl championship. The bad news is that half-way through the season, that the road only gets steeper. The NFL has once again provided the drama and now it’s up to the Seahawks to decide which role they will play.

As always, thanks for reading and feel free to join the conversation any time on Twitter @TheMichaelGrey.

Close
Seahawks still in position for title defense, but it won’t be easy