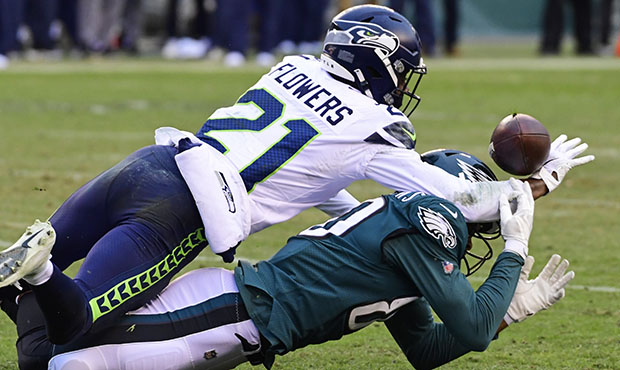 Would Tre Flowers still start for the Seahawks if Quinton Dunbar is cut or suspended? (Getty)
(Getty)
Share

As we wait to figure out what exactly happened with Seahawks cornerback Quinton Dunbar as he has a warrant for his arrest in Florida for armed robbery, which his lawyer says he is innocent of and that they have proof from witnesses showing that, there, of course, will be speculation as to his place on Seattle’s roster.

Acquiring Dunbar was the surprise move of the Seahawks’ offseason, sending a fifth-round pick to the Washington Redskins for the talented cornerback, who was Pro Football Focus’ second-ranked cornerback in the entire NFL last season. He was expected to come in and start at right cornerback, taking over for third-year cornerback Tre Flowers. Dunbar would have started opposite Shaquill Griffin, a Pro Bowl cornerback in 2019, giving the Seahawks an improved secondary on paper.

But with Dunbar’s alleged involvement in an armed robbery case in Florida, it’s unclear whether or not he’ll play for the Seahawks or any team in 2020. If he does play for the Seahawks, there’s a chance that he is suspended for the start of the regular season, but it’ll depend on the case, which has already seen conflicting reports in the 24 hours since it was first announced.

While talking to 710 ESPN Seattle’s Bob, Dave and Moore Friday afternoon, John Clayton said adding another cornerback, such as Logan Ryan and Darqueze Dennard, which Jim Moore advocated for in a column for 710Sports.com, isn’t out of the question, while also suggesting former New York Giants first-round pick Eli Apple to the mix as available targets.

“You’d think so, but it’s one of those things where he was a bonus,” Clayton told Bob, Dave and Moore, “because they still had Tre Flowers (when they traded for Dunbar), who they still believe in as a corner and they still have other options that they could use. They could get Akeem King back and they can use Neiko Thorpe and all those different things, and you still have Ugo Amadi, who’s there to play the slot, so (Dunbar) became a nice bonus kind of like the Quandre Diggs move last year.”

The Seahawks acquired safety Quandre Diggs from the Detroit Lions for a fifth-round pick, which put a Pro Bowl alternate safety at the back of Seattle’s defense, which improved greatly when he played. Clayton said on his own show on Friday morning that expected the same of Dunbar for 2020 and he reiterated that to Bob, Dave and Moore.

“A safety that good makes you that much better and a cornerback as good as (Dunbar) makes them that much better, so it was kind of a bonus arrangement for a fifth-round pick,” Clayton said.

When the news of Dunbar’s warrant first came out Thursday, Bob, Dave and Moore were on the air and discussed what the Seahawks could do at cornerback if Dunbar was cut or missed time with a suspension. Dave Wyman suggested they stick with Flowers as a starter.

“If all things are equal, they’d probably rather have a guy back who’s familiar, at least, with the (team),” Wyman said Thursday. ” … You go look at their roster right now and it’s a lot of young guys and all of a sudden you go back to looking at ‘OK, it’s back to being Tre Flowers and Shaquill Griffin’ (and) I still defend Tre Flowers. He had three interceptions, two sacks, he made a lot of tackles and he’s physical.”

Despite starting for two seasons, some are down on Flowers because he faltered a bit down the stretch, allowing more big plays and also getting called for penalties. in his show on Friday, Clayton said Flowers is in almost the same position Griffin was in heading into 2019.

After an impressive rookie season in 2017, Griffin struggled in his sophomore campaign and some thought Flowers would surpass him as Seattle’s top cornerback. Griffin ended up having a career year in 2019, earning his first Pro Bowl nod.

“Shaquill Griffin bounced back, had a Pro Bowl season, and now is in a contract year this year and Flowers has a chance to bounce back (like Griffin did),” Clayton said. “Flowers did start all season and he had good games, certainly there were games where he struggled and the interference rules probably affected him more than most cornerbacks. But if something does happen as far as Dunbar getting cut or suspended, Flowers is still there.”

Listen to the first hour of John Clayton on 710 ESPN Seattle at this link or in the player below.