Have the Seahawks added enough talent this offseason? 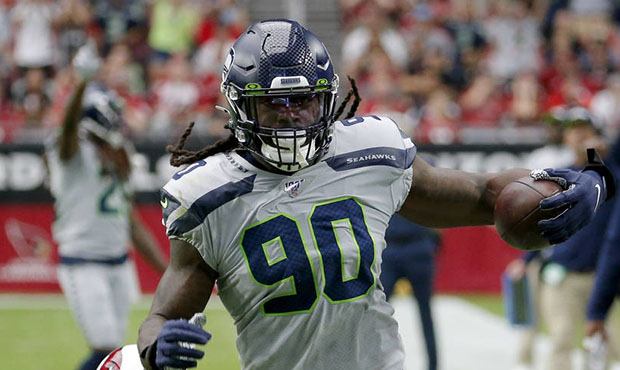 The Seahawks and defensive end Jadeveon Clowney have yet to agree on a contract. (AP)
(AP)
Share

One of the first storylines of the Seahawks’ offseason was when quarterback Russell Wilson told ESPN that the team needed to add more superstars for the 2020 season.

Moore: Seahawks need veteran RB, but it shouldn’t be Marshawn

One player that he was referring to was defensive end Jadeveon Clowney, who played in Seattle last season and despite being arguably the top remaining free agent, is still unsigned.

Seattle has added a handful of players on both sides of the football through free agency, the draft and even a trade, and the hope is the offense can continue to be among the league’s best and that the defense take a big step forward after struggling to stop the run and pass. Additionally, the pass rush accumulated just 28 sacks in the regular season, tied for the second-least sacks in the NFL in 2019. You can find a full list of added players here.

But after all the acquisitions and with Clowney unsigned, has the team done enough to improve its chances of making a run at the Super Bowl next season?

“I don’t think so. But again, that’s where Clowney fits in,” former NFL quarterback Brock Huard told 710 ESPN Seattle’s Bob, Dave and Moore last week. “If Clowney signs, then all of a sudden I think it’s a different feeling and I think your quarterback says ‘fine, I’ll take care of the offense. We’re good.'”

On Monday, Huard told 710’s Danny and Gallant that two players the Seahawks should consider signing if they don’t keep Clowney are defensive end Everson Griffen and defensive back Logan Ryan, who would add more star power to the defense.

Former NFL linebacker Dave Wyman told his Bob, Dave and Moore co-hosts on Monday that he isn’t sure whether Ryan, Griffen or any other notable free agent will end up with the Seahawks at this point of the offseason.

“I just don’t know that there’s going to be that many more signings that are significant,” he said. “The Quinton Dunbar (trade) was fantastic and I just think they’re counting on a lot of those defensive backs like Marquise Blair, and the pass rushers, too, (like) L.J. Collier and Rasheem Green, can take another step forward and you’ve got Bruce (Irvin). I’m not sure they’re going to bring in anybody else.”

Dunbar was acquired from the Washington Redskins for a fifth-round pick and is expected to challenge Tre Flowers for a starting cornerback position. Blair was a second-round pick in 2019 and Collier and Green were both highly selected defensive ends, being drafted in the first round in 2019 and the third round in 2018, respectively. The team also brought back former Seattle defensive ends Bruce Irvin and Benson Mayowa, who had 15.5 sacks combined last season.

Jim Moore would like to see one more player added to the pass rush, such as Griffen, Clay Matthews or former Seahawk Michael Bennett, and is surprised their names aren’t brought up more in terms of Seahawks rumors since they could likely be signed for cheap at this stage of the offseason.

“Maybe they’re playing the waiting game with Clowney to see what he’s going to do,” he said. ” … It sure sounds like they’re comfortable with the roster that they have right now.”

While the Seahawks may be comfortable with the current roster, Bob Stelton is not.

“I still think they’re a piece away and whether that’s Clowney, whether they make a trade (for Jacksonville Jaguars defensive end Yannick) Ngakoue or it’s Griffen or whether it’s any of the guys that we’ve touched on, I still feel like they need to add another piece and a substantial one,” he said. “Somebody that’s going to require a lot of attention from that offensive line he goes up against.”

Wyman is still surprised that Clowney is unsigned given that Tennessee Titans head coach Mike Vrabel has publicly said how much he is a fan of his and that the Seahawks really enjoyed having him on the team last year.

“It’s just very strange to me that Mike Vrabel loves him, everyone loves Jadeveon Clowney and now we’re talking about something less than $12 million (per season to sign him),” he said.

Clowney has had a few injuries during his NFL career, which some have said has contributed to his market being less than he anticipated. Wyman pointed out that the Seahawks’ two top draft picks this year, Jordyn Brooks and Darrell Taylor, had injuries at the end of their college careers. Taylor couldn’t participate in the NFL Scouting Combine while Brooks could only do the 40-yard dash.

“(The Seahawks) take chances on injuries all the time. I don’t see that Clowney is a problem,” Wyman said. “His teammates loved him, they loved that he played hurt, so it just leads me to believe … that this is more of an injury thing than (with) anybody else because by all accounts everybody loves him.”

Listen to the full discussion at this link or in the player below at the 22:28 mark.

Close
Have the Seahawks added enough talent this offseason?