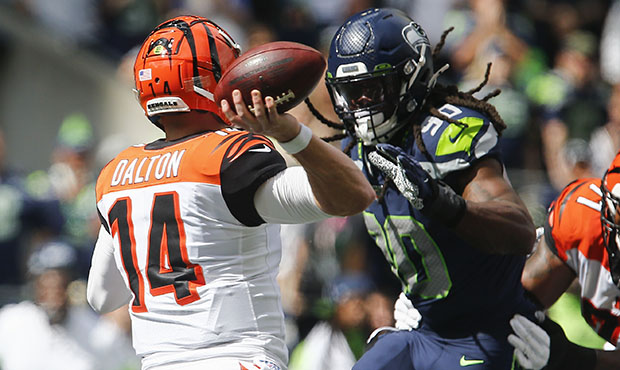 All eyes are on Seahawks DE Jadeveon Clowney as free agency approaches. (Getty)

The main storyline of the Seahawks this offseason is whether or not defensive end Jadeveon Clowney will be back in Seattle for 2020 and beyond.

Clowney, 27, is one of the top non-quarterback free agents on the open market and could fetch quite the pay day given his prowess against the run and pass, as well as his ability to take over games like he did in Week 10 against the San Francisco 49ers. Even though he has yet to record 10-plus sacks in a season and had just 3.5 in 2019, Clowney should be a hot commodity.

Clowney also seemed to enjoy his time in Seattle and made sure to thank both head coach Pete Carroll and general manager John Schneider after the season for acquiring him from the Houston Texans. He also told reporters that he wants to play for a contender, not just take the highest contract he can get.

In situations like this, it isn’t uncommon for the team to use a franchise tag on the player, assuring club control for at least one more season while typically working out either a trade or a long-term contract.

We saw the Seahawks do this last year with defensive end Frank Clark, who was traded to the Kansas City Chiefs. The problem is the team cannot use that tag due to an agreement that the two parties agreed to when Clowney was shipped to the Pacific Northwest.

Rumors have been floated that Clowney was looking for a record-setting deal, but some think that’s not the case or won’t happen, such as ESPN’s Jeremy Fowler, who joined 710 ESPN Seattle’s John Clayton to discuss Clowney’s free-agent status.

“He’s happy there and a lot of these pass rushers are probably going to be franchise tagged but he’s got in his contract that they can’t do that to him, so as a result, he’s going to be sitting pretty here, but the rumors of him getting $25 million a year, that’s probably not going to happen,” Fowler said.

Fowler and Dan Graziano wrote a story for ESPN.com on what they heard at the NFL Scouting Combine (ESPN+ membership required) and the two said they aren’t sure if Seattle is willing to pay $18-20 million for a player who had 3.5 sacks last season.

“The Seahawks value him highly but don’t want to break the bank,” Fowler and Graziano said.

If Seattle does go to that range, Fowler thinks a deal could get done.

“I think more like $18 to $20 (million annually) would be the sweet spot,” Fowler told Clayton.

What could potentially drive up Clowney’s price is that he’s likely the best pass rusher to hit the open market.

The Jacksonville Jaguars announced they are using the franchise tag on Yannick Ngakoue, who has been one of the better and more consistent edge rushers in football the last few years. He has since stated he wants out of Jacksonville, so he could be traded. The Tampa Bay Buccaneers will likely tag Shaquil Barrett, who had a breakout year with 19.5 sacks.

The reported value of a franchise tag for defensive ends is $19.3 million, so it wouldn’t be shocking if Clowney wants that amount or more annually.

The Seahawks didn’t give up too much to acquire Clowney, trading a third-round pick and situational defenders/special teamers Jacob Martin and Barkevious Mingo to Houston, but with a depleted defensive line, getting him back in Seattle is a priority, though there will be competition.

“Seattle’s going to put their best foot forward and try and get him,” Fowler said. “I think there will be at least two teams who will push for him. You’ve heard a lot of Colts and a lot of Titans (rumors as) the two teams that Clowney and his camp expect to be involved, so we’ll see where that goes.”

The Titans were the most surprising team in the AFC last year, riding a strong running game and stout defense to the AFC Championship. The Colts, meanwhile, disappointed with Jacoby Brissett taking over at quarterback for the retiring Andrew Luck. The team went 7-9 and missed the playoffs, but could do a quick turnaround as they have the second-most cap space in the NFL and are rumored to be targeting quarterbacks in free agency like Teddy Bridgewater and Philip Rivers.

Listen to Fowler’s full conversation with Clayton at this link or in the player below.

Wyman: Hawks’ problems not always what you think