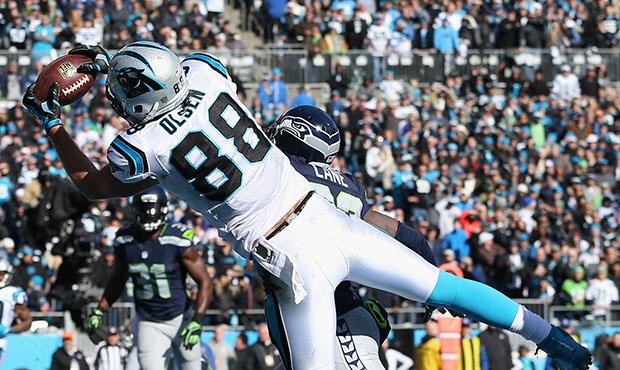 The Seahawks apparently are listening to Russell Wilson, who said he wants the team to go out and get some superstar players.

A better Seahawks offense could improve the defense’s mentality

Former Carolina Panthers tight end Greg Olsen will visit Seattle as the third stop on his three-team tour. Olsen visited Buffalo on Wednesday and will also visit Washington before coming to the Northwest. You would have to think the Seahawks have a decent chance of signing him.

Free agent TE Greg Olsen has added a third visit to his agenda. He’s also set to visit the #Seahawks, source said. Some real interest. So, Bills, Redskins and Seattle.

Of the three teams, the Seahawks have a better chance of winning their division. The Bills could be intriguing. They’ve established themselves as a wild card playoff team. The coach and the general manager came from the Panthers. If Tom Brady does leave the New England Patriots, the Bills could have a chance to win the AFC East.

But the more and more you think about how Brady is acting in the past couple of days, it looks as though he will stay. The Patriots reportedly would offer him $30 million. If they can convey to him a plan to get more talent on offense, he would be crazy to leave.

In Washington, he would be linking up with his former head coach Ron Rivera.

The price won’t be too bad. His salary would probably come in around $5 million to $5.2 million. Dallas Cowboys tight end Jason Witten came out of retirement and got $4.25 million. The comparable to Olsen would be Vernon Davis, who signed a three-year, $15 million deal with the Redskins. Davis just announced his retirement this week.

With Ed Dickson being hurt for most of the past two years, the Seahawks were young at tight end. They were smart signing Luke Willson for the minimum salary, but he is an unrestricted free agent. The team should have both Jacob Hollister and Will Dissly back for 2020. Dissly is coming off an Achilles tear and won’t able to do much until the start of training camp and Hollister is a restricted free agent.

In the time that he’s played, Dissly has showed he can be not only a starting tight end, but he would be a good starting tight end. He has two years left on his rookie contract. If he comes back healthy, the Seahawks would feel good about their future at the tight end position.

In many ways, though, getting Olsen would be a bonus that wasn’t expected. The strength of the Seahawks is the offense at the moment. They rank eighth in the year in yards. They scored 25.3 points a game. DK Metcalf had one of the best years among the rookie wide receivers. The pairing of Metcalf and Tyler Lockett is a good one.

Lockett was a Pro Bowl alternate at wide receiver. Getting Olsen would give Russell Wilson two Pro Bowl talents to throw to and Metcalf, who could evolve into a Pro Bowler.

To make room for Olsen, the Seahawks would release Ed Dickson, who is scheduled to make $3 million. Dickson enters the final year of a three-year, $10.7 million contract.

The top of the tight end market will go for $10 million a year. Austin Hooper and Hunter Henry are up for those type of contracts. Olsen might be considered the third best option. Other considerations for the Seahawks would be Eric Ebron and Tyler Eifert.

Eifert might be the option if the Seahawks don’t get Olsen, but Eifert has been fighting injuries for years. Ebron fits the age of a tight end the Seahawks might want to sign. He’s 26 and he’s been to the Pro Bowl. But he’s going to command more money than Olsen. He is coming off a two-year deal at $13 million in Indianapolis.

Why Chris Carson is Seahawks’ most intriguing player returning from injury