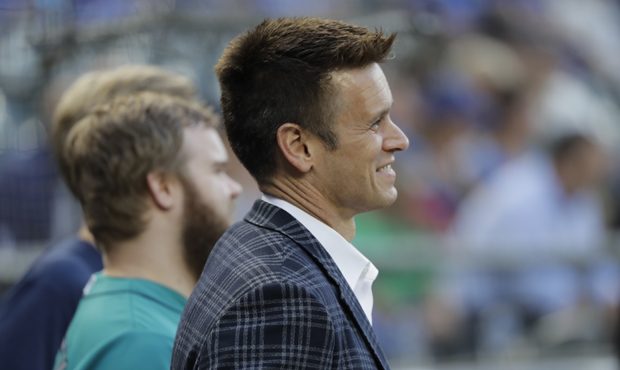 The Mariners' Jerry Dipoto had a quiet week at the MLB general managers meetings. (AP)

Mariners general manager Jerry Dipoto said it would be a quieter offseason, and so far that is exactly what we have seen. Before this year, the latest date on the calendar that Dipoto made his first offseason trade as Seattle’s GM was Nov. 15 (in 2017), so this is different.

No matter if Dipoto sticks to his stated plan to look at what Seattle has in its young players and build the roster appropriately, or perhaps goes off script a bit if opportunity should arise, there should be plenty of items of interest in baseball for Mariners fans to follow this winter if this week’s MLB general managers meetings are any indication.

A year ago #EdgarHOF watch filled many of the minutes between offseason player moves. This winter it appears the story to follow will be the saga of the Astros’ electronic sign stealing. As mentioned in our Mariners Talk video last week, rumblings of cheating have surrounded the Astros the past few years – mostly off the record. Oakland A’s starter Mike Fiers put the story front, center and on the record when he detailed to The Athletic’s Ken Rosenthal and Evan Drellich what he saw behind the scenes when he pitched for the Astros in 2017. This story is not going away. MLB is investigating and it would appear that the Astros are facing a severe penalty if found guilty.

On the free agent front, there were interesting developments with two players accepting qualifying offers and reliever Will Smith taking a $40-52 million deal with the Braves. Were the early signings a result of the late-breaking free agent market last year? And will we see more, or could that lead to a more interesting Winter Meetings?

As for trades, the GM meetings have traditionally been the place where the groundwork has begun to be set. One nugget regarding the Mariners came out of the meetings, with Rosenthal reporting that there is interest from clubs in both Mitch Haniger and Marco Gonzales but the Mariners are only open to moving Haniger. The lone surprise here is the interest in Haniger after a down 2019 season where he was mostly injured. My question would be, just exactly what was that interest? Was this a case of clubs looking for a bargain after the down year, more of an opportunity buy, or has he actually been prioritized by a club? Hard to see the Mariners moving Haniger, who is under club control through the 2022 season, for lesser value.

With the GM meetings in the rear-view mirror, the owners meetings are on deck. While they don’t often get the attention that the Winter Meetings or GM Meetings do, look for significant news this year as a number of changes to the game that we have been hearing about throughout the season should become official. A 26-man roster is expected with a limit placed on how many of those players can be pitchers (most likely 13). Relievers will be required to face a minimum of three batters or pitch to the end of an inning. September call-ups will be severely limited with rosters expanding to just 28 players instead of 40 in the final month. We most likely will be looking at changes with the injured list, as well, with 10 days the minimum stay for position players but 15 as the minimum for pitchers.

One other item of interest next week will be the Nov. 20 deadline for clubs to add Rule 5-eligible players to their 40-man rosters. The Mariners placed a number of their Rule 5 eligible players on the 40-man late last season in order to call them up in September, but with the roster currently at 35 there is the possibility they could add a couple more, most notably Ljay Newsome and Dom Thompson-Williams.