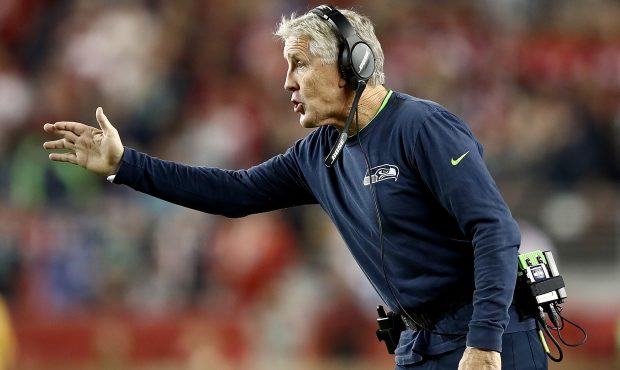 While the Seattle Seahawks may not be for sale, there are rumblings that some in the NFL want Amazon founder Jeff Bezos to purchase the team.

Groz: Are Hawks the NFC’s team of the decade? We’re about to find out

A Washington Post story (note: Bezos owns The Post) reported that someone who is “familiar with the NFL’s thinking” said that Bezos has expressed interest in buying the Seahawks.

A person “familiar with the team’s thinking” told The Post that the team is not for sale.

There was some speculation on the team’s future after owner Paul Allen passed away last October. Since his passing, his sister, Jody Allen, has served as the Seahawks’ chair. The Seahawks are owned by the Paul G. Allen trust, which Jody Allen is head of. Paul Allen purchased the team from Ken Behring in 1997 and helped keep the team in Seattle.

Allen’s company, Vulcan, declined to comment on The Post’s story.

“I will do all that I can to ensure that Paul’s vision is realized, not just for years, but for generations,” Jody Allen said in a statement after her brother’s death.
Seahawks head coach Pete Carroll, who signed a contract extension this offseason, had nothing but praise for Jody Allen as Seahawks chair.

“We had one really significant meeting, a couple of talks, and she has been really excited and really fired up about doing this,’’ Carroll said two days after signing his new contract per the Seattle Times’ Bob Condotta. “And anybody that’s a ’12,’ that cares for the Seahawks, would be really fired up about how she is looking at this and how she wants to go about it. She’s got a great love and spirit for the area and the club. Must be in the family that she cares so much. But she’s ready to go and I’m excited for her.’’

Condotta’s story noted Jody Allen has been hands-on as an owner, and was a driving force in contract extensions for Carroll, quarterback Russell Wilson and linebacker Bobby Wagner, and that Allen gave the OK for the team to use her plane to fly defensive end Jadeveon Clowney to Seattle from Houston to get his trade between the Seahawks and Texans completed faster.

According to Condotta’s story, Seahawks general manager John Schneider spoke admirably of Jody Allen’s involvement with the last February, which is when the organization made official that a new ownership structure was in place, with Jody Allen as chair.

According to a CBS Sports report on Sunday, Bezos has spent “considerable time around owners” including Washington Redskins owner Dan Snyder. CBS also reported that Bezos is in the process of moving to Washington D.C., which caused speculation that the Redskins may be for sale.

Redskins spokesman Sean DeBarbieri told CBS Sports that the team is “100 percent not for sale and Daniel Snyder is not looking to sell any portion of the team,” according to The Post. DeBarbieri added that Snyder “has not seen Jeff Bezos in a decade.”

“I’m sure that eventually it would be in everyone’s best interests if someone that’s as community-oriented as him gets involved in the Seattle situation,” New England Patriots owner Robert Kraft said.

“I’d carry him piggyback to get him to the NFL,” Jones told the outlet.

According to The Post story, it’s not clear how much of a sports fan Bezos is, and Bezos has never publicly expressed interest in owning a sports franchise. Bezos did attend this year’s Super Bowl, and Amazon has a deal to stream Thursday Night Football games to Amazon Prime subscribers.

Owning an NFL franchise isn’t cheap, as each of the league’s 32 teams are valued at $1.9 billion minimum, and ownership rarely changes hands. The Carolina Panthers were the most recent team to be sold, as billionaire David Tepper purchased the franchise for $2.3 billion.

The Seahawks are the 15th most valuable franchise in the NFL according to Forbes’ 2019 valuation list and are estimated to be worth just under $2.8 billion.

Tyler Lockett returns to Seattle, expected to play in Week 12