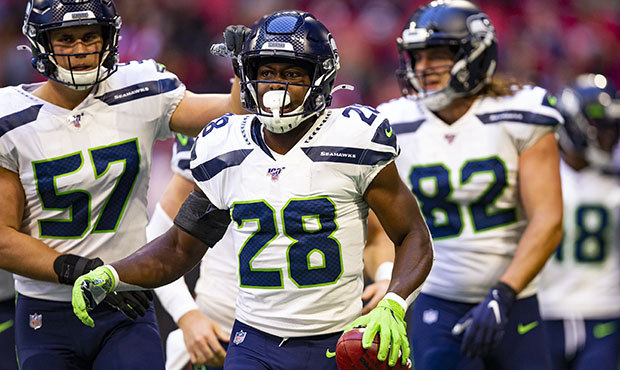 Rookie Seahawks defensive back Ugo Amadi could be an option at nickel cornerback. (Getty)
(Getty)
Share

The Seahawks may be 7-2 going into a Monday night showdown with the undefeated 49ers, but they have that impressive record despite a glaring issue that is something the team is not used to dealing with under head coach Pete Carroll.

The problem is that Seattle’s defense not only isn’t a strength this year, but in fact may be its biggest weakness.

The Seahawks rank 25th in the 32-team NFL in total defense, allowing an average of 380.8 yards of total offense to opponents per game. The biggest reason is their struggles against the pass, as their average of 278.1 passing yards allowed is 28th in the league. And while the days of Seattle’s Legion of Boom secondary are certainly long gone, that’s not necessarily the only factor in opponents burning the Seahawks through the air. The pass rush hasn’t clicked like Seattle had hoped, as its 15 sacks on the year are tied for 25th in the league.

“The truth shall set you free, and the truth is this defense as it’s currently composed and playing with their front and coverages and tying them together is not working,” Brock Huard said Tuesday on 710 ESPN Seattle’s Danny and Gallant.

So what should the Seahawks do to fix their defense? Danny O’Neil presented these three options to Huard:

• A) Stand pat and see if you can get young players to improve.
• B) Change scheme – specifically to use less base defense in favor of more nickel packages.
• C) Change personnel, like Seattle recently did by making rookie Marquise Blair a starter at safety.

“It’s absolutely B and C,” Huard responded. “You have to be adaptable in this league. (You can’t) keep doing what you’ve been doing defensively, and that’s making it a career day for any quarterback that’s playing.”

Huard, who played quarterback in the NFL for the Seahawks and Colts, explained that QBs are always looking for answers when they look at opposing defenses, and Seattle hasn’t been making that very hard this season.

“You want answers before every snap, and sometimes you have to wait until post-snap to find those answers. Not against what the Seahawks have been doing defensively,” he said. “You’ve got answers pre-snap, you’ve got answers post-snap. I’ve talked to some defensive guys this week and they’re just dumb-founded. They’re like ‘I don’t know what they’re doing,’ because this isn’t what they did seven, eight years ago in coverage. They’re just leaving voids and vulnerabilities seemingly everywhere.”

Not only could the Seahawks start using an extra defensive back on a more regular basis by playing more nickel, but Huard personally wants to see a switch at the nickel cornerback position.

“When do you want Ugo Amadi?” Huard asked. “He would be the one guy that I would like to see at nickel (cornerback).”

If the Seahawks did try Amadi at the spot, it would displace Jamar Taylor but also be a bit of a leap of faith. As Huard explained, Amadi made sense to play the position after he was drafted last spring, but injuries to other players led to Seattle keeping the former Oregon Ducks standout at safety.

“He had to play safety because (Bradley) McDougald was out, (Marquise) Blair was out, guys were out. I would have loved to have seen that guy play a ton of nickel in April, May and June, (then) in August and September. And you know what? That dude’s around the ball. That guy’s not scared. He likes to make plays, he’s a football player, he played for four years (at Oregon) and you drafted him in the fourth round. You drafted Tedric (Thompson) and Lano (Hill) and all these dudes in the third and fourth rounds and you played them. I’d like to see that kid get his chance.”

The good news for the Seahawks is that they have some extra time. If they decide to play Amadi at nickel corner or implement trade acquisition Quandre Diggs, who hasn’t played for Seattle yet due to a hamstring injury, the fact that everything is pushed back a day with their next game coming on Monday works in their favor.

“I think there’s a whole lot on the table. I think it’s a good thing it’s a Monday game and it gives that (coaching) staff – an experienced staff – a Monday and a Tuesday, even into Wednesday, if they want to make a few of these little tweaks in personnel and in scheme, they’ve got the opportunity to do so,” Huard said.

Seahawks LB Bobby Wagner on defensive struggles: ‘We will be better’

Close
Seahawks need to make changes on defense, but what should they be?