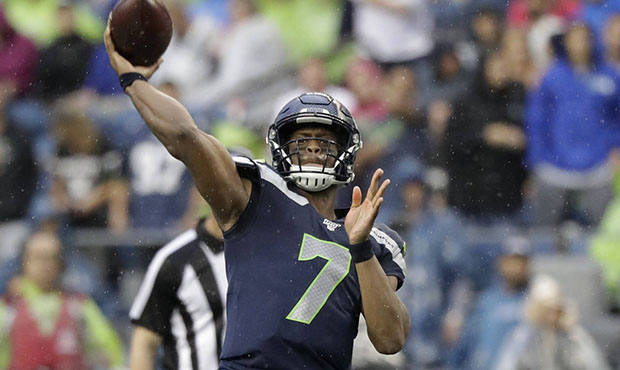 The most surprising release by the Seahawks on Saturday was QB Geno Smith. (AP)
(AP)
Share

The Seahawks finalized their 53-man roster in time for Saturday’s NFL deadline, but it didn’t include something every team needs: A backup quarterback.

It turned out to only be temporary, however, as QB Geno Smith re-signed Sunday after being released Saturday.

Why? It had everything to do with Seattle’s trade with Houston for three-time Pro Bowl defensive end Jadeveon Clowney, which wasn’t made official until Sunday afternoon. The Seahawks sent Barkevious Mingo and Jacob Martin along with a 2020 third-round draft pick to Houston for Clowney, but until the deal was done, Mingo and Martin needed to be on the 53-man roster. To create the space need, Smith was released, and once a roster spot opened up following the trade, he was brought back to assume his role as Russell Wilson’s backup.

Smith had appeared to win the backup QB job over Paxton Lynch (who had been reported to be waived Friday) and J.T. Barrett, only for the wrench to be thrown into the mix with the Clowney deal. Because Smith was released instead of waived, he did not have to clear waivers before being re-signed, so the Seahawks and Smith apparently had an understanding about the situation going into Saturday’s finalization of the initial 53-man roster.

QB Geno Smith tells me he is going to sign with the Seattle #Seahawks.

While Seattle could have brought in a cheaper backup QB option than Smith before their Week 1 game against Cincinnati, the Seahawks would already be saving money by releasing and then signing back Smith. As a vested veteran, Smith’s whole contract for 2019 would have become guaranteed had he made the initial 53-man roster.

Saving money by releasing and then re-signing Smith certainly helps Seattle manage the salary cap considering the price tag Clowney will come with. Because the Texans put the franchise tag on the 26-year-old pass rusher, he is set to make $15.967 million in 2019. He will become a free agent after this season, as the Seahawks won’t be able to sign him to an extension because the deadline for teams to negotiate new deals with franchise tag players passed in July.

Smith wasn’t the only vested veteran to be unexpectedly released by the Seahawks. The other big surprise of Saturday was the release of wide receiver Jaron Brown, who appeared in line to be the No. 2 wideout behind Tyler Lockett but instead finds himself without a team.

Here are the announced Seahawks roster moves from Saturday:

Included below are additional details to some of the Seahawks’ bigger decisions that were reported before their announced their official roster Saturday afternoon.

When the news that the Seahawks were releasing veteran cornerback Jamar Taylor came out, Mike Salk of 710 ESPN Seattle’s Brock and Salk though there may be more to it.

That one does surprise me. Maybe hoping to make the deal not guaranteed? You’d think there’s s trade coming. https://t.co/z5h3xm8Jw0

Salk was right. The Seahawks traded a conditional seventh-round pick in 2021 to the New York Jets for cornerback Parry Nickerson, as reported by ESPN’s Adam Schefter.

A sixth-round pick of the Jets in 2018, the 24-year-old Nickerson played in all 16 games last season for New York, including two starts. The 5-foot-10, 182-pound Tulane product had 21 combined tackles and one pass defended.

Tight end Jacob Hollister, who Seattle acquired in an offseason trade from New England, did not make the cut despite a touchdown catch in Thursday’s preseason win over Oakland.

C.J. Prosise’s spot on the roster appeared safe after Bob Condotta of The Seattle Times reported Saturday afternoon that fellow running back J.D. McKissic has been released. The oft-injured Prosise had an impressive preseason.

A trio of surprising veterans were released by the Seahawks in the wake of the Clowney trade, which creates a bit of a salary cap crunch for Seattle. Jamar Taylor, who was a possibility to be the team’s nickel cornerback, will be released, per NFL Network reporter Tom Pelissero. Another cap casualty is wide receiver Jaron Brown, according to NFL Network reporter Ian Rapoport. Rapoport also tweeted that defensive end Cassius Marsh has been released.

All three of those releases are considered surprises.

The 28-year-old Taylor is a six-year NFL vet who signed with Seattle in May. Marsh, a fourth-round selection by Seattle in 2014, returned to the team this offseason after splitting last season with New England and San Francisco. the 29-year-old Brown, 29, meanwhile, was in line to be the team’s No. 2 receiver behind Tyler Lockett. Brown joined the Seahawks last season after five years with Arizona, and while he caught just 14 passes for 166 yards in 2018, five of his receptions were for touchdowns.

The Seahawks will reportedly try to sneak impressive undrafted rookie Jazz Ferguson onto their practice squad. NFL Network reporter Tom Pelissero tweeted Saturday morning that Seattle is cutting Ferguson. The 22-year-old receiver out of Northwestern State-Louisiana caught seven passes for 119 yards and a touchdown in the preseason. He also committed a fumble.

The Seahawks have released veteran defensive back DeShawn Shead, according to ESPN’s Brady Henderson. Shead, 30, returned to Seattle for a second stint with his former team in July. He began his career with Seattle in 2012 and remained with the team until he signed with the Detroit Lions in 2018 as a free agent.

Thank you to the entire @Seahawks organization. I’m grateful for the opportunity to compete once again as a hawk! 🙏🏾 I will always appreciate and have love for the 12’s! Can’t wait to see what next! #TrustTheProcess #TMC #TheGrindDontStop

Shead, who played both at safety and cornerback in the preseason, accounted for two scores on defense: the first a sack for a safety against the Denver Broncos, and the second a pick-six against the Minnesota Vikings.

There’s a possibility Shead could be re-signed after the start of the regular season; as a vested veteran, Shead would have been guaranteed his full salary if he was on Seattle’s 53-man roster in Week 1. A vested veteran signed during the season is only guaranteed 25 percent of his salary.

Luani appeared in 12 games last year for the Seahawks and recorded nine tackles and a quarterback hit. The former Washington State Cougar was originally acquired by Seattle as part of a trade with the Oakland Raiders in September 2018.

Tago, also a former Cougar, was signed two days ago to add depth for Seattle’s final preseason game against the Oakland Raiders. An undrafted rookie, Tago had previously been with the Seahawks earlier in the offseason.

The first of Seattle’s decisions was at backup quarterback, where it appeared at first that Geno Smith had won the job over Paxton Lynch when news of Lynch being waived was reported Friday night. That, of course, turned out to be only part of the story.

Will John Ursua get the chance to be Seahawks’ next Baldwin?