The last letters of "Safeco Field" are removed by a crane over the home plate entrance of the Seattle Mariners' ballpark Wednesday, Feb. 13, 2019, in Seattle. Under a new 25-year naming rights deal, the Mariners will call the stadium T-Mobile Park. The Mariners' ballpark has been known as Safeco Field since it opened in 1999 as part of a 20-year agreement. Safeco Insurance and the Mariners announced in June 2017 that the agreement wouldn't be renewed following the 2018 season. (AP Photo/Elaine Thompson)
(AP Photo/Elaine Thompson) 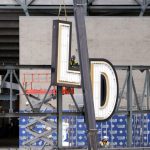 The building may already officially be known as T-Mobile Park, but the Mariners’ home stadium is finally undergoing aesthetic changes to reflect its new name.

On Wednesday, a crew took down the Safeco Field sign that has adorned the park’s home plate entrance at the corner of Edgar Martinez Drive and Dave Niehaus Way since it opened in 1999.

T-Mobile was announced as the new naming rights partner for the building in December, with the switch from Safeco Field becoming official Jan. 1. T-Mobile’s contract with the Mariners lasts for 25 years.

Check out the attached photo gallery in this post for a look at the changes that have been made thus far to the stadium. Mariners 1B Ty France is looking forward to the team adding some notable players this offseason to build off a 90-win 2021 season.