The Mariners stumbled against the A’s, but they’re still alive 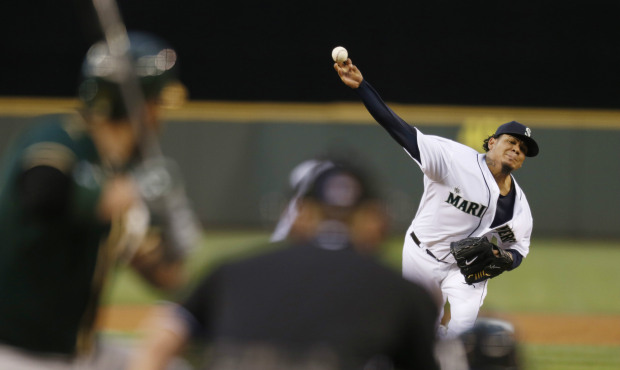 In a stretch where every series has seemed like the biggest of the season, it’s easy to feel like the Mariners dropping two of three to the Athletics is a giant stumble.

This was their opportunity. The Mariners could have overtaken the A’s for the American League’s top wild-card berth with a series win, giving them much-needed momentum heading into a grueling final two weeks in which they play just three games at home.

That didn’t happen. But it isn’t the end of the line for the Mariners.

They’re still just a game behind Kansas City for the second wild-card with 14 games to go, and strange as it sounds, the road trip might be just what they need considering how poorly they’ve played at home (38-40) and how well they’ve played on the road (42-28).

If there’s one person who is adamant that the sky isn’t falling, it’s manager Lloyd McClendon.

“We haven’t been good at home. This wasn’t a good homestand,” he said. “The good part is we’re going on the road, where we’ve been real good. You wanna talk about improbable, that’s as improbable as you can get.”

And so the Mariners head out to take on the hottest team in baseball, the Angels, who just had a 10-game winning streak snapped Sunday by Houston. It’s not crazy to think that Seattle can do some damage there, though.

After all, these are the improbable Mariners we’re talking about, a team that is 7-5 against the Angels and already has a pretty good track record of dealing with the hottest team in baseball – just ask the Royals, who found one of their torrid runs end with a Mariners sweep in Kansas City in late June.

All improbable things aside, if the Mariners are going to keep themselves in the thick of the playoff race over the next two weeks, they’ll need to make some serious offensive improvements from this latest 2-4 homestand.

They scored more than two runs just twice over the six games, which just so happened to be their only wins. Players like Austin Jackson (4 for his last 25), Kyle Seager (3 for his last 23) and Kendrys Morales (2 for his last 23) need to shake off their slumps. And they continue to strand runners and waste big-time pitching performances like what they were provided by Felix Hernandez (seven innings, two runs, eight strikeouts) and Chris Young (six innings, four hits, two runs) this weekend.

This would be the worst time of the season for those problems to persist, and if they do it will be time to hit the panic button. But these are the improbable Mariners, and there is time yet for them to prove once again exactly why.

Close
The Mariners stumbled against the A’s, but they’re still alive