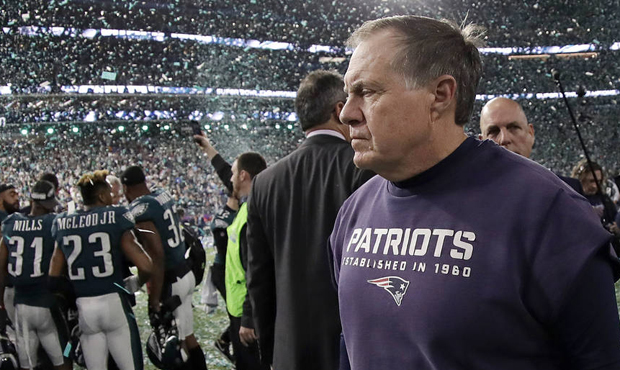 For 16 years, Bill Belichick and Tom Brady stuck daggers into the hearts and souls of five franchises.

Their minds and skills gave the Patriots narrow Super Bowl victories that left lasting impressions on opposing franchises. The St. Louis Rams and Carolina Panthers had to overcome close losses in the early on in the Patriots’ Super Bowl run. The Philadelphia Eagles had a courageous performance from Terrell Owens coming off a broken bone in his leg but lost by three in Super Bowl 39.

The Seattle Seahawks and Atlanta Falcons are still dealing with the emotions of losing last-second games to New England. Some in Seattle still haven’t recovered from the Malcolm Butler interception from the Patriots’ 1, and the same can be said about Falcons fans for the Patriots’ 25-point comeback last year against Atlanta.

Super Bowl 52, however, put the dagger in the hearts and souls of the Patriots and their fans. Brady did his part throwing for 505 yards, but Belichick didn’t have his best game. In fact some of his decisions before and during the game left the team vulnerable to the 41-33 loss.

Two things you wonder is whether there will be lasting effects similar to the victims of the Patriots’ success in five previous Super Bowls. Five championships tempers the frustrations of a close third Super Bowl loss, but the loss ruined the chance to get that sixth Super Bowl ring.

Here are the head-scratchers provided by New England.

• The benching of cornerback Malcolm Butler. Butler won the Super Bowl against the Seahawks with his interception of the controversial Russell Wilson pass from the Patriots’ 1. His only significant activity Sunday was being spotted crying during the national anthem. Belichick said it was a coaching decision for the betterment of the team. No one explained how benching a Pro Bowl-caliber cornerback when he was needed helped the Patriots, and his absence forced Belichick to put Stephon Gilmore on Alshon Jeffery in the second half after others were beat for three catches for 73 yards in the first half. With Gilmore isolating on Jeffery, the other corners couldn’t do anything to stop the other Eagles pass catches, and Nick Foles threw for 373 yards and three touchdowns as a result. Even Gilmore and fellow cornerback Eric Rowe didn’t understand the last-minunte decision to keep Butler on the bench instead of having him on the field. Even if it turns out there was a discipline problem, the Patriots needed Butler and didn’t have him.

• Trades of Chandler Jones and Jamie Collins. Last year we talked about the brilliance of Belichick being able to win a Super Bowl without two of the Patriots’ best defensive players. Their departures caught up to the Patriots early in the season, when they were giving up 32 points a game in the first month, and certainly again in the Super Bowl. The Pats had no pass rush and no sacks. Foles had amble time to find receivers. Chandler Jones finished third in the Defensive Player of the Year balloting as an Arizona Cardinal. And while Collins may have finished the season on the Browns injured reserve list, he was a Pro Bowl-caliber linebacker who can rush and cover. Belichick’s defense is filled with good players but not great playmakers. The Eagles put up 538 yards on 71 plays. The Pats were defenseless.

• Being too cute. Two play calls stood out as being mistakes. On a third-and-5 from the Eagles’ 35, Josh McDaniels called a trick play in which Danny Amendola threw a pass to Tom Brady. Please. Brady had 10 stitches near his thumb prior to the AFC Championship game. He’s 40. Naturally, he dropped the ball. Then, instead of going for a field goal, the Patriots went for it on fourth down and had an incompletion. Using good field position from the 35, the Eagles drove 65 yards in six plays to take a 15-3 lead in the second quarter. Then to make matters worse, Philadelphia coach Doug Pederson got a touchdown before the half by using his fullback to throw a touchdown pass to Foles.

• Wasting an unbelievable performance by Brady. Tom Brady seems to bail out the Patriots in every Super Bowl. He got hot in the second half of the Super Bowl win over the Seahawks when the secondary wore down with injuries, and the New England defense stepped up to win the game. Last year, Brady overcame the 25-point deficit against the Falcons. To do that, Brady had to set a Super Bowl record by throwing for 466 yards. In Super Bowl 52, he broke his own record with 505 passing yards, but that wasn’t good enough to win the game in a 41-33 shootout.

• Worries that this could be the Patriots last hurrah. Coordinators Josh McDaniels and Matt Patricia are leaving for head coaching jobs. Other coaches might not be back, either from retirement or going with the departing coordinators. Rob Gronkowski is thinking about whether he should retire or return. That’s a lot of question marks brewing. Belichick and Brady will be back, so don’t ever count them out, particularly with the AFC being so down. But this third Super Bowl loss could linger with this team. A winnable game slipped away.