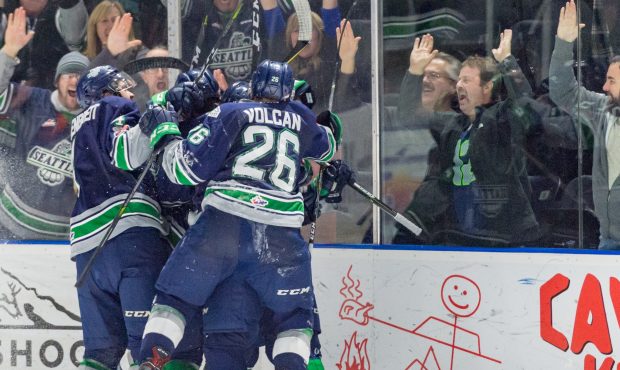 In his office at the accesso ShoWare Center, prior to the Thunderbirds last home game against Prince George, he watches a game on a flat screen hanging from the wall along with a different game on a tablet propped up on his desk. It comes with the territory of being a hockey general manager, always keeping an eye on what’s happening.

During the first half of the season, Farwell has watched his team go through some high points along with some struggles.

After 33 games his Seattle team sits at 15-14-3-1 and has a slim, one-point, lead for the final playoff spot in the Western Conference. The team has dealt with some inconsistencies, as well as injuries, but there has been one constant throughout the first portion of the WHL season.

“The one thing I’m happy about is how hard our guys have played,” Farwell says. “The coaches have done a real good job, our guys are prepared. They’re into it and have a real belief in what they’re doing. We’re in every game and that part has been positive. It’s good to see some of the young guys are improving.”

Head coach Matt O’Dette does have his team prepared night in and night out but has had to navigate an inexperienced roster, along with some hits due to injuries.

Those injuries have been frustrating for Farwell, who says the club is still trying to figure out what they have this year when fully healthy. The key injury has been to goaltender Carl Stankowski. Last year’s playoff phenom has yet to set a skate on the ShoWare Center ice this year, which has been a disappointment.

“Not being able to get Carl healthy has really thrown a wrench into things,” Farwell adds. “That’s part of it and then the other injuries. That kind of thing has been frustrating.”

Stankowski was injured this summer working out with Team Canada.

Originally, he was listed as month-to-month and has since been downgraded to week-to-week, but his return date is still unsettled.

“He’s had some complications,” Farwell said about the young goaltender. “They’re looking, he’s maybe got some other health problems. They think they’ve got it figured out. They’re hoping this week to set the treatment and then we are thinking he’s going to play, which I wasn’t sure about at one point. It’s still up in the air, we don’t know for sure so that’s part of the frustration.”

The Thunderbirds have also seen goalie Liam Hughes miss a significant amount of time due to injury, along with veteran defenseman Aaron Hyman and promising rookie Tyler Carpendale. That has made it hard to fully judge what kind of team the Thunderbirds could be.

“We really wanted to come in and see what we had,” Farwell said. “I thought our team performed really well coming out of the gate. If we had everyone it would have been interesting, I think we would have been in the hunt. But now, we’re still sorting out what we have.”

He has a team that has played eight rookies on a regular basis.

That inexperience has popped up at times as Seattle has lost some close games. They’re in every game, but it’s been the one mistake, or the one missed shot that has cost them.

Is the team better than what the record says it is?

“We could be ten points higher,” Farwell said. “There’s been enough games where we really could have won games but we either didn’t finish it or couldn’t quite score. We could be higher in the standings. I don’t know what that’s worth, ‘you’re better than your record’, you’ve got to show it.”

Farwell has some promising rookies. Most notable among that group are Dillon Hamaliuk and defenseman Jake Lee. Hamaliuk is a big, bruising forward who has shown the ability to generate chances while winning puck battles in deep. He has yet to learn how to cash in on those chances and Farwell is reminded of another power forward who went through the same early struggles.

“I see him scoring a lot in practice and I think it’s going to come,” Farwell says of Hamaliuk. “I used to watch that with Keegan (Kolesar) before he started scoring and I think Hamaliuk is going to score in the league. When he does, boy is he going to be formidable guy.”

The club will get back into action after Christmas and we are less than a month away from the WHL’s trade deadline in early January. Farwell says that it looks to be a seller’s market this year but is holding off on declaring what he’ll be doing with the Thunderbirds.

While Farwell determines what the best route forward for the Thunderbirds will be, the local hockey news has been centered on the NHL’s seemingly impending arrival in the Seattle market. A lot of people wonder, or even worry, what affect having major league hockey in the area will have on the Thunderbirds.

Farwell is confident that it will have a positive impact and only raise the awareness of the sport. He also points to the fact that the Thunderbirds, and their northern rivals in Everett, still have a lot to offer in terms of affordability.

“The cost for two people to go to an NHL game you can just about have a season ticket for us,” he says. “We’re talking two different price points and I think the growth in the sport will be phenomenal. As people get excited about the game, communities start to build rinks and more kids get involved. That’s the key point for us and I think we’ll see the spin off from that.”

The Oak View Group that is building the new arena at Seattle Center and working with the NHL to secure an expansion team has also reached out to Farwell and the Thunderbirds.

“We’ve had some discussions about being involved and doing some things jointly,” Farwell says. “They’ve been very open with what their long-term plans are. I think some of that stuff will start in the second half, when they start their ticket drive.”

The T-Birds entered the holiday break hot. They’ve won two games in a row, scoring 15 goals along the way and hope to continue that trend next week. It will be an interesting stretch the rest of the way in December, as Farwell will try to determine what to do at the trade deadline and try to get a handle on what his team will look like going forward.

He’ll be watching, as always, and it all begins Wednesday, the 27th in Spokane.