Memorial Cup Day 1: The Cup arrives, T-Birds practice and we have a game 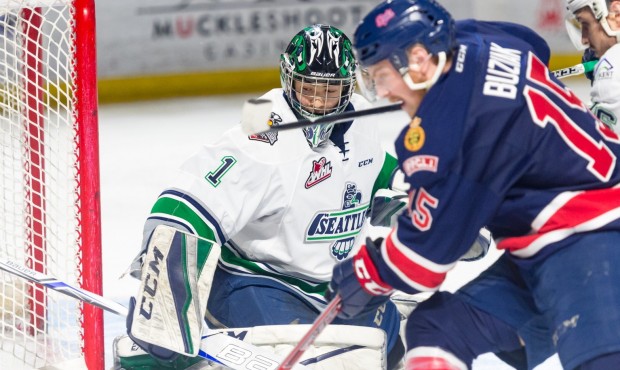 WINDSOR, Ontario – Day one of the 2017 MasterCard Memorial Cup has arrived with a was a ton of activity.

There were parades, pomp and circumstance, a Seattle Thunderbirds practice and the Cup itself made an appearance. All that will be capped by the tournament’s first game between the host Windsor Spitfires – affectionately knows as the ‘Spits’ by the locals — and the Quebec Major Junior Hockey League champs, the Saint John Sea Dogs.

Here are the Day 1 highlights

Grand entrance for the Cup

Day 1 kicked off with the arrival of the most coveted item in Windsor this week. It started down the Detroit River on a boat, a Canadian Coast Guard ship that goes by the name Constable Carriere. Once on shore, the Cup was led through the streets of Windsor on a military parade that included the Windsor Police Services, Royal Canadian Legion Colour Party Zone A-1, Sterling Heights Police Colour Party, Royal Canadian Navy, Windsor Regiment, Essex and Kent Regiment, #31 Service Battalion, RCMP, CBSA, Veterans, Cadet Units, Windsor Fire Department, and Military G-Wagons, M-37’s, and 43 Willys Jeeps.

The trophy was created in 1919 to honor Canadian soldiers who fell in World War I and in 2010 it was redirected to honor all fallen Canadian military personnel.

The parade eventually came to Cenotaph where a program was conducted that included a First Nations Drummers, Scottish Pipers and a Gun Salute by members of the R.C.N.A. Firing Party.

T-Birds on the ice

Seattle had a practice Friday morning to prepare for its opening game Saturday afternoon against the Ontario Hockey League champion Eire Otters. Seattle will then play Windsor on Sunday evening and finish off the round-robin portion of the tournament Tuesday against Saint John.

Three games in four days seems like a grueling task but history says it may not be that bad.

As Sportsnet’s Neate Seager points out, the last five teams in the slot the Thunderbirds are in have made the finals and three have won the whole thing.

One thing the Thunderbirds will have to overcome is the time difference. Of the four teams in the tournament, they will have to make the biggest adjustment. The team arrived in Windsor on Wednesday and has had several practice sessions, so they should be acclimated for the earlier start times.

Traditionally, the home team gets the tournament’s opening night slot and Friday is no different. Windsor didn’t have the playoff run they hoped too and were knocked out in the first round by their arch-rivals, the London Knights. The franchise has been here before and is making its fourth appearance in the Memorial Cup. Windsor has won the tournament twice, in 2009 and in 2010. On both occasions they defeated WHL teams, beating the Kelowna Rockets and Brandon Wheat Kings respectively.

Saint John has also had previous Memorial Cup success. The franchise has only been around since 2005 but has two appearances in the Memorial Cup and won the tournament back in 2011 when they beat the Kootenay Ice.

Friday’s game with Windsor features a staggering 20 players on the two rosters that have been drafted by NHL teams. The game starts at 4 p.m. pacific time and will be broadcast on the NHL Network in the Seattle area.

Close
Memorial Cup Day 1: The Cup arrives, T-Birds practice and we have a game