Thunderbirds one win away after 5-3 Game 5 victory 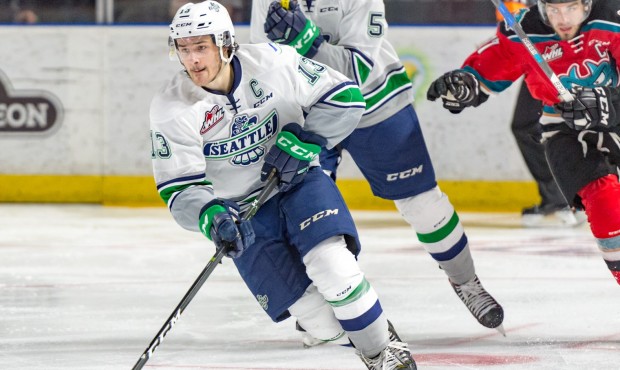 KENT – The Kelowna Rockets made the mistake Friday night of getting Mathew Barzal mad.

The Seattle Thunderbirds center got mixed up in a scrum during the second period that saw him display some uncharacteristic anger. He had to cool off for two minutes in the penalty box, but as soon as he was back out on the ice, he sparked the Thunderbirds to two quick scores.

“That’s hockey, that’s the playoffs,” Barzal said. “They’re good so, that kind of stuff is going to happen. We’ve just got to stick together.”

Seattle would end up scoring three straight times on its way to big 5-3 bounce back win in Game 5 of its Western Conference Championship series with the Rockets. Barzal had three assists and Alexander True scored twice as the Thunderbirds are now one win away from defending their Western Conference title.

The T-Birds had to overcome the continued loss of Ethan Bear, ten Kelowna power plays and a Rockets team that had to feel confident after a convincing Game 4 win. Bear missed his second straight game after hurting his hand in Game 3.

Despite the injury, Bear took warmups in pre game as he desperately wanted to play. He couldn’t go in the end, but it helped inspire his teammates.

“It’s huge, just to see how much he wants to play,” Barzal said about his teammate. “That desperation level, he wants to play so bad so if you are in the lineup, you’ve got to work hard.”

After his moment of rage, Barzal went to work on two late Seattle power plays in the second period.

First, he set up Alexander True with a pin-point pass to the crease that the big Dane tipped past Kelowna goalie Michael Herringer. That goal came during a brief 5-on-3 power play. Seattle would be left with over a minute on the second power play and Barzal would go to work again.

This time he found Ryan Gropp in the faceoff circle and the New York Rangers prospect buried a wrist shot for his ninth of the post season. The two goals broke a 2-2 tie and put Seattle up two goals heading into the third period.

Barzal continued his onslaught in the third period when he set True up again for a big power-play goal to give Seattle its biggest lead of the night — a lead they would not relinquish.

Seattle ended the night 3-for-8 on the power play as the game became a special teams match up. The two teams combined for 18 power-plays on the evening. Kelowna went 3-for-10 on its power-play chances.

“Both teams have to use the short bench when the game is like that,” Seattle head coach Steve Konowalchuk said. “You have to just stay with it and stay focused. Make sure that you control what you can control. Try to keep the emotions in check but sometimes it’s tough when there are a lot of penalties like that.”

With a big crowd at the ShoWare Center, the T-Birds got going early on.

Scott Eansor electrified the crowd when he picked off a pass at the Kelowna blue line while killing a penalty. He skated in on Michael Herringer and slid the puck through the five-hole for the short-handed marker.

“We’re short-handed early there and instead of them getting a power play goal, we get a goal,” Konowalchuk said. “It’s a big part of the game.”

Not to be outdone, Sami Moilanen would extend Seattle’s lead with a breakaway goal of his own later in the opening period. He stole the puck at the Seattle blue line while the two teams were playing four-on-four and was off to the races. He deked Herringer and beat him for his fourth of the playoffs.

Kelowna would get one back on a four-on-three power play shortly after as Calvin Thurkauf deflected a Reid Gardiner shot past Carl Stankowski from just outside the crease. The Seattle goalie played well again on Friday by making 37 saves to push his playoff record to 11-2.

Seattle led 2-1 going into what would turn out to be a crazy second period.

Nick Merkley got things going early on when he would score from the slot on a Rockets power play to tie the game at two.

The second period then devolved into a penalty fest as the two teams combined for 11 minor penalties. Kelowna got the calls early, taking a 7-2 power-play lead but the calls started to turn the other direction and Seattle ended the period with the majority of the power plays.

With that many power plays the game lacked any real flow and both teams were showing signs of frustration.

“It was a crazy game,” Konowalchuk said. “It’s just one of those games where emotions got the best of both teams and it’s that kind of series.”

Kelowna would add a cosmetic score late in the third period from Dillon Dube on yet another power play.

On the verge of a second straight trip to the finals, the T-Birds will get back on the bus for a Sunday afternoon Game 6 back in Kelowna.

“We’re just going to work as hard as we can and try to get a win,” Barzal said. “But we’re not looking at that right now. It’s the process. Rest tomorrow and start to feel good Sunday morning. Come game time it’s shift by shift.”

• Barzal and Merkley got tangled up a few times on Friday, and have several times over the series. The two players are good friends off the ice and the competitive juices are flowing. “He’s a really good player and I’ve got to keep an eye out for him,” Barzal said. “We are buddies but come playoff time we’re out there trying to win a series. He’s a tough competitor.”

• Friday’s game saw eight goals scored by the two teams but none of them came while playing five-on-five. All three Kelowna goals came on the power play, as did three of Seattle’s goals. The Thunderbirds also scored while short-handed and while playing four-on-four.

• Barzal’s three assists extend his playoff scoring streak to 13 as he has picked up a point in every playoff game he’s played in.

• In the East, the Regina Pats are on the verge of punching their ticket to the WHL Finals. They beat the Lethbridge Hurricanes 5-3 to take a 3-2 series lead.

• Konowalchuk classified Bear’s injury as day-to-day and added “we’ll see for next game.”

Close
Thunderbirds one win away after 5-3 Game 5 victory