Seahawks must run again to continue their run of success 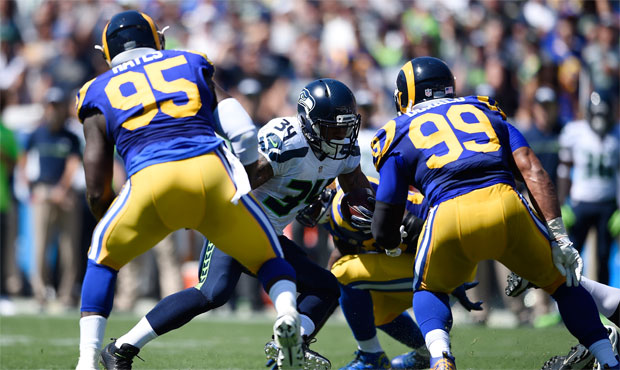 Rediscovering their run game is the key not only for Sunday's game but for the rest of the Seahawks' season. (AP)
(AP)
Share

That’s what Seattle’s ground game needs to take on Sunday against San Francisco.

That’s what the Seahawks have taken too often in these first two weeks. Actually, that might be an understatement considering that four of Seattle’s first six rushes last Sunday against Los Angeles failed to gain yardage.

Progress. That’s what Seattle is looking for on Sunday. Specifically, progress in the run game that has been the bedrock for Carroll’s offensive approach for 15 years and counting. But before we get into that history, let’s frame the current problem.

The Seahawks have ranked among the league’s top five teams in rushing yards for each of the past four years. Right now, they rank 18th after two weeks with 89.5 yards per game. Even that total is misleading, though, because while Christine Michael is averaging 5 yards per carry, the rest of the team is averaging 1.9. In other words, Seattle’s backup running back who had to play his way onto the team in August is the one keeping this whole thing afloat.

Now the 49ers are the team that Seattle doesn’t want to become, San Francisco having missed the playoffs each of the past two years. The key for Seattle to avoid that fate is also the key to winning Sunday’s game: running the ball. It’s the best way for the Seahawks to beat the 49ers with a compromised Russell Wilson, and it just so happens to be the way their coach decided his team would play back before his second season in USC.

“Really, it was just one that came right from the heart,” Carroll said.

We’re going back to 2002 now. Up until then, Carroll had been a defensive-minded head coach who contracted out his offense to a coordinator. He did that with the Jets in 1994 and with the Patriots from 1997 through 1999. It’s also what he did at USC in 2001, his first year as the Trojans’ coach. The result that year was a 6-6 season in which his team threw 379 passes.

“We were a drop-back team,” Carroll said. “We made a ton of mistakes and had all types of issues and stuff.”

So Carroll decided to get his hands dirty that offseason. He dug into the offense up to his elbows with the idea that if he was going to lose a head-coaching job for the third time in 10 years, it was going to be with an offense that had his fingerprints all over it.

“I thought I may not get another year,” Carroll said, “so I was going to do it exactly the way I wanted to do it.”

So the Trojans shifted to a timing-based passing attack. They had the quarterback move. They utilized play-action passes, and most importantly, they installed a zone-blocking scheme and emphasized the run.

“It hasn’t been the same since,” Carroll said.

The format carried USC to a historically successful run in college football, winning seven straight conference titles, and it took Seattle to its first NFL championship.

And after two weeks of running in place, the Seahawks need to rediscover the ground game that has been a constant for Carroll for more than a decade. Seattle doesn’t need to reinvent the wheel, but it does need to get the running game rolling. The outcome of Sunday’s game against San Francisco and the trajectory of this season depends upon it.

Close
Seahawks must run again to continue their run of success