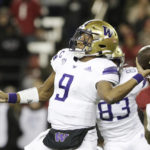 PULLMAN, Wash. (AP) — Michael Penix Jr. threw for 484 yards and had five total touchdowns and the No. 12 UW Huskies reclaimed the Apple Cup with a wild 51-33 victory over the WSU Cougars on Saturday night.

A year after the Huskies watched the Cougars celebrate snapping a seven-game losing streak on the turf of Husky Stadium, Washington kept alive its hopes for a New Year’s Six bowl game thanks to its standout quarterback and a handful of defensive stops in the second half.

The 84 combined points were the most in the 114 matchups between the rivals.

The 🍎🏆 is headed back to Seattle!

No. 13 @UW_Football powered past Washington State on the Palouse in the highest-scoring Apple Cup 𝐄𝐕𝐄𝐑.

“What a game. You knew it was going to be that. We expected it to be crazy, especially in the first half,” Washington coach Kalen DeBoer said. “They’ve shown that they come out swinging. And we weathered the storm and still had the lead.”

Rome Odunze had a 5-yard touchdown run in the opening moments of the fourth quarter. Peyton Henry kicked a 20-yard field goal with 5:02 left, and Wayne Taulapapa provided the capper with a 40-yard TD run with 1:28 left.

“We trusted our guys more than them,” Penix said. “We just took advantage of it. Whenever we had a shot I made sure I gave those guys a chance to come down with the ball and they made it happen.”

The Huskies finished with 703 yards of offense against a Washington State defense that led the Pac-12 in scoring defense at under 20 points per game. If not for two second-half turnovers by the Huskies, the margin of victory could have been much larger.

“We gave up 51 points. I’m not focused on the offense,” Washington State coach Jake Dickert said. “We win as a team, we lose as a team. It wasn’t our best performance. I thought the offense gave us a shot to stay in the game.”

Washington’s victory also sent Utah to the Pac-12 championship game as the opponent for Southern California next week in Las Vegas.

Cameron Ward threw for 322 yards and two touchdowns for Washington State, but the Cougars failed to score on five of their six offensive possessions in the second half. Odunze had five catches 157 yards and a touchdown to go along with his TD run and Jalen McMillan caught six passes for 150 yards, including a 75-yard touchdown reception on the first play of the second half that gave the Huskies a 35-27 lead.

75-yard house call to start off the second half 💨

Washington has won eight of nine in the series and the past four games played in Pullman. Washington State was seeking consecutive Apple Cup victories for the first time since 2007-08.

“Winning 10 games is not easy. Even in our program’s tradition and history there’s only been select teams over the 100-plus years and we’ve done that. It’s been a special year,” DeBoer said.

Penix was 25 of 43 passing and nearly topped 500 yards for the second time this season. He threw for 242 yards as part of a first half that featured 55 combined points, seven lead changes, 630 total yards.

Penix threw for two touchdowns and ran for two more in the first half, one a 30-yard run on what turned out to be a double lateral.

It's a PENIX world we're just living in it… @themikepenix 😤

Penix connected with Ja’Lynn Polk on a 26-yard TD and a 47-yard TD to Odunze on a double move.

Washington State also had some tricks. Punter Nick Haberer hit linebacker Daiyon Henley on a 36-yard pass that set up Washington State’s first TD. It was one of four fourth-down conversions for the Cougars and Ward capped that drive with a 14-yard touchdown run.

Ward added touchdown passes of 34 yards to Robert Ferrel on fourth-and-10, and a 15-yard TD pass to Nakia Watson. Dean Janikowski’s second field goal on the final play of the half pulled the Cougars within 28-27 at the break.

“They were one step ahead of us every step of the way,” Dickert said.

UW Huskies: Odunze and McMillan both went over 1,000 yards receiving for the season. It’s the first time in school history the Huskies have had two 1,000-yard receivers in the same season.

WSU Cougars: The Cougars had the top scoring defense in the conference entering the game giving up 19.8 points per game. But there were no answers slowing down the Huskies, especially on third down where Washington converted 11 of 13 attempts.

Both teams will find out their bowl destination on Dec. 4 when bowl selections become official.