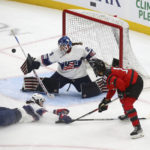 SEATTLE (AP) – Hilary Knight had two goals and an assist, Nicole Hensley stopped 22 shots, and the United States beat Canada for the third straight time, 4-2 in the Rivalry Series on Sunday night.

Abby Roque and Savannah Harmon also scored for the U.S., which won 4-3 in a shootout on Tuesday and 2-1 on Thursday to kick off the series.

Marie-Philip Poulin and Sarah Nurse scored for Canada, and Ann-Renée Desbiens made 25 saves.

An announced crowd of 14,551 attended the game at Climate Pledge Arena, which set a record for a U.S. women’s national team home game.

The U.S. will host the fourth game of the series Dec. 15 in Henderson, Nevada. Remaining dates and locations have yet to be announced.

You talk about eye candy?! 😍

About 5 minutes later, Knight got her first of the night to give the Americans a two-goal advantage.

Knight scored on the power play 7:37 into the third to seal the win.

Harmon opened the scoring 40 seconds into the game, but Poulin tied it for Canada with 7:50 remaining in the first period.

Canada edged the U.S. 2-1 for the world title in September in Denmark. The Canadians also beat the Americans 3-2 in the Olympic final in February in Beijing.

Canada went 3-1-1 against the U.S. in last season’s women’s hockey Rivalry Series, which was cut short by the pandemic.