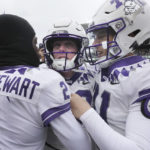 FORT WORTH, Texas (AP) — There will be some people who look at how fourth-ranked TCU is still undefeated going into the final week of the regular season, and they will question if the Horned Frogs really deserve to be part of the playoff discussion.

Their latest victory came on a chaotic game-ending field goal that capped a two-score rally in the final 2 minutes, 7 seconds at Baylor, in a stadium with a bitter playoff-busting memory for the Frogs (11-0, 8-0 Big 12, No. 4 CFP). Only one of their conference wins has been by more than 10 points and they had to overcome double-digit deficits after halftime in back-to-back games last month.

“They can say whatever they want to say. Our job’s to win football games. We’ve done our job up to this point,” first-year TCU coach Sonny Dykes said after Saturday’s 29-28 win. “And, you know, hopefully we’ll do it again Saturday. And what anybody says I couldn’t care less about.”

The first Big 12 team to reach 11-0 in the College Football Playoff era, the Frogs play their regular-season finale against Iowa State (4-7, 1-7) next weekend. They then will have to go only about 20 miles from campus to play No. 15 Kansas State or No. 24 Texas in the Big 12 championship game at AT&T Stadium on Dec. 3, the day before the final CFP rankings that will determine the four playoff teams.

Those will be the 10th and 11th consecutive Saturdays for TCU to play since its open date during Week 3 back in mid-September.

“We’re tired. I mean, I’m not going to lie. … We’ve played a lot of games like this, and this takes a lot out of you,” Dykes said. “It wasn’t always perfect (Saturday), but the end result happened the way we wanted it to and we were fortunate. I think we all know that. But at the same time, it’s like I told the guys, it’s not an accident. If we’re not a team that doesn’t do things the right way, then we don’t get ourselves in that position to be able to make that play.”

A play called bazooka, with the field-goal unit running onto the field as the final seconds were clicking off the clock. Griffin Kell, who earlier missed an extra point, made the 40-yard kick as time expired at McLane Stadium — where a 61-58 setback in 2014 was their only loss that season, the first with a four-team playoff.

Quarterback Max Duggan said his only thought while the offense ran off the field as the field-goal unit shuffled by them was, “Griff’s gonna go win the game.”

Emari Demarcardo’s 3-yard TD with 2:07 left capped a 90-yard drive to get the Frogs within 28-26, but he dropped the pass on a 2-point conversation try that would have tied the game. TCU got the ball back with 1:34 left after using all three of its timeouts and forcing a three-and-out by Baylor, which finished with 501 total yards a week after the Frogs held Texas to 199 yards in a 17-10 road victory.

Since coming off their open date with an emotional 42-34 win at SMU, which had won the previous two games in that series when Dykes was coach of the Mustangs, and a 55-24 win over then-No. 18 Oklahoma in their Big 12 opener, the Frogs have had nothing come easy.

They got the tiebreaking touchdown at then-undefeated Kansas with 1:36 left, before their double-digit comebacks at home: down 17 in the second quarter before beating Oklahoma State 43-40 in double overtime, then behind 18 late in the first half to Kansas State before winning 38-28.

After those four consecutive victories over ranked opponents — though only K-State is still in the AP Top 25 — the Frogs won 41-31 at West Virginia after adding a touchdown in the closing seconds. They scored three touchdowns in the fourth quarter to beat Texas Tech 34-24.

“This league is really good,” Dykes said. “Anybody that doesn’t understand that, or tries to diminish what these players have done, just doesn’t know much about what they’re talking about honestly.”

AL RAYYAN, Qatar (AP) — Robert Lewandowski finally scored at the World Cup on Saturday, helping Poland beat Saudi Arabia 2-0 and boosting his team’s chances of reaching the knockout stages. Lewandowski shed tears after scoring in the 82nd minute. He raced toward the corner with his arms outstretched, then stayed slumped on the field […]