Orlando Magic center Bol Bol (10) goes up to dunk in front of Indiana Pacers forward Isaiah Jackson (22) during the first half of an NBA basketball game in Indianapolis, Saturday, Nov. 19, 2022. (AP Photo/AJ Mast) 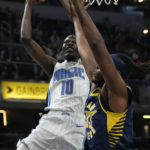 INDIANAPOLIS (AP) — Aaron Nesmith made two free throws with 9.6 seconds left and the Indiana Pacers came up with a final defensive stop to beat the Orlando Magic 114-113 on Saturday night to open a two-game set.

The teams will meet again Monday night in Indianapolis.

“It’s gritty, it’s who we’re trying to be,” Pacers coach Rick Carlisle said. “The crowd was into it. It was a fun game to win.”

In the last seconds, the Magic’s Franz Wagner drove to the basket, but his layup attempt was long off the backboard and Mo Bamba was unable to tip in the rebound.

“I don’t think you could ask for a better look,” Magic coach Jamahl Mosley said. “He gets all the way to the rim. We had a chance at the offensive rebound. There was a lot of physicality going on down there. … You can’t ask for a better look than that to win the game, basically a layup at the rim.”

Tyrese Haliburton had 22 points and 14 assists for the Pacers. They have won four straight to improve to 9-6.

“We’re going through this as a group for like the first time, but it’s happening over and over where we’re in close games down the stretch,” Haliburton said. “You’ve just got to kind of figure it out on the go. We’re growing together as a group.”

Myles Turner had 20 points and 11 rebounds. Indiana is 7-0 when Turner plays at least 26 minutes.

Nesmith, whose foul shots came after an offensive rebound, scored 19 points off the bench.

“After missing a couple of free throws in the game last night, I think he made all four of ’em tonight and made some threes,” Carlisle said about Nesmith. “He was just into it. We couldn’t have won the game without him.”

Wagner had 29 points, including five 3-pointers, for the Magic. Bol Bol had 22 points and 11 rebounds, and Mamba had 21 points and nine rebounds.

Pacers: Buddy Hield ranks second in the NBA in 3-pointers with 55. He was also second with 262 last season.