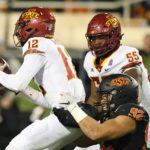 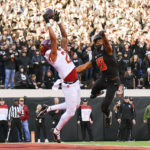 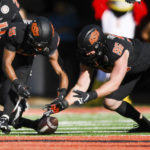 Sanders, the regular starter, has been battling a shoulder injury. He replaced Gunnar Gundy late in the third quarter, and his 14-yard touchdown pass to Jaden Nixon with 9:18 remaining in the fourth put Oklahoma State up 17-14.

It was Gunnar Gundy’s first career start. The son of Oklahoma State’s head coach had his moments, but he was benched after throwing an interception. Coach Gundy said his son needs to learn not to force things.

“Gunnar competed,” coach Gundy said. “His poise was good. There’s a couple times I wish he could have made a guy or two miss, but they (Iowa State) tackled good. But the last interception — what he needs to know is this: It’s okay to not make a play.”

“Our inability to take care of the football cost us a football game today, and that’s hard because you see the attitude, the effort, the investment, the fight of our kids,” Iowa State coach Matt Campbell said.

Iowa State’s Darien Porter blocked a punt in the second quarter, and the Cyclones took over at the Oklahoma State 9-yard line. Sean Shaw made a leaping grab in the back of the end zone for a 4-yard touchdown reception from Dekkers that gave the Cyclones a 7-3 lead.

Oklahoma State came right back. John Paul Richardson’s 83-yard touchdown catch from Gundy put the Cowboys back on top. It was the longest reception of Richardson’s career.

Oklahoma State led 10-7 at halftime behind a defense that forced three turnovers and allowed just 116 yards.

Iowa State’s Jirehl Brock’s 1-yard touchdown run on the opening drive of the second half put the Cyclones up 14-10.

With Oklahoma State up 17-14, Iowa State went for it on fourth-and-1 from its 25, but Dekkers was stuffed on a quarterback sneak, and Oklahoma State took over. Tanner Brown’s 40-yard field put the Cowboys up 20-14.

Iowa State appeared to have struck back with about four minutes remaining, but Jaylin Noel dropped what looked like would be a 78-yard touchdown in the open field. The Cyclones ended up punting.

Iowa State got it back one last time on its 28-yard line with 2:09 remaining and no timeouts. The Cyclones drove to the Oklahoma State 23, but Collin Oliver sacked Dekkers on fourth down to end the threat.

Iowa State: Once again, a struggling offense didn’t allow the Cyclones to take advantage of a strong defensive effort. The Cyclones have lost five of six, and they haven’t scored more than 24 points in any of the defeats.

Oklahoma State: The Cowboys won despite gaining just 244 yards. The defense, which has struggled for much of the season, handled business at the end.

“Today, our defense forced turnovers, (got) stops, put the game away in the end,” coach Gundy said. “Our guys were fantastic today on defense. So I couldn’t be more proud of them.”

Hutchinson surpassed his single-season school mark for receptions in a season last week. He now has 97 catches this season and 244 in his career.