North Carolina quarterback Drake Maye (10) throws a pass against the Virginia defense during the first half of an NCAA college football game on Saturday, Nov. 5, 2022, in Charlottesville, Va. (AP Photo/Mike Caudill) 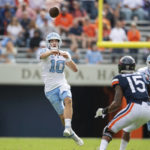 CHARLOTTESVILLE, Va. (AP) — Mack Brown’s second tenure at North Carolina, now in its fourth season, is starting to look more like what he came back hoping to build, which is what he built the first time.

Drake Maye threw for two touchdowns and ran for another and No. 17 North Carolina outscored Virginia 21-7 after halftime to rally for a 31-28 victory Saturday.

Elijah Green scored twice and Josh Downs caught 15 passes, including a touchdown, for the Tar Heels (8-1, 5-0 Atlantic Coast Conference, No. 17 CFP), now 5-0 in league play for the first time since 2015, when they qualified for their lone appearance in the ACC championship.

Brown wanted to highlight a different 5-0: the Tar Heels’ record on the road this year.

“Nobody on that team was even born the last time we won five consecutive games on the road,” Brown said. And last year, they lost all six away from Chapel Hill.

The five wins have come by a total of 18 points.

After Virginia went ahead in the third quarter, Brown said Downs approached him on the sideline, tryng to offer the coach the same encouragement he provides to them.

“I went up to him and I just reciprocated the energy,” Downs said. “I said, `Coach, don’t worry, I got you right here.’ I told that same thing to (offensive coordinator and quarterbacks coach Phil) Longo. I’m just like, `I got you when you need it.’ “

The Cavaliers (3-6, 1-5), playing without three starting wide receivers, lost for the fifth time in six games and need to win their final three games to qualify for a bowl game.

Elliott praised the players that stepped in for what he called “the big three,” but said: “We talk about competitive stamina a lot, and football comes down to five, six, seven plays, and we didn’t make those plays in the third quarter.”

Virginia started fast, getting a touchdown on its opening drive for the first time this season and led 14-10 at halftime. But Maye led the Tar Heels downfield in just 2:55 to start the third quarter, Green finishing the drive with a 4-yard run. Virginia answered with a 75-yard touchdown drive of its own to retake the lead, but Maye found Downs from 19 yards before the quarter was over and hit Green with a 22-yard pass in the flat with 13:19 left.

Brennan Armstrong pulled Virginia within a field goal with his second scoring run with 3:24 left on a drive that covered 71 yards in just 59 seconds, but Virginia was offsides on the ensuing onside kick, giving UNC the ball at the Cavaliers 23. One more completion to a diving Downs converting a third-and-2 allowed the Tar Heels to run out the clock.

“He just continues to amaze me with the things that he does,” Brown said.

North Carolina: Maye has frustrated teams with his prolific passing, but especially frustrated ACC tackles leader Nick Jackson on a second- quarter scramble from the Virginia 5. Rolling right and looking for a receiver, Maye instead found Jackson closing in and reversed course and scrambled all the way accross the field for the touchdown.

Virginia: The Cavaliers tried a surprise punt on a fourth-and-5 play from the Tar Heels’ 32 in the second quarter, but while Armstrong appeared to be trying to kick it out of bounds, it bounced into the end zone for a touchback and a net gain of just 12 yards. North Carolina then drove 80 yards in 13 plays to take a 10-7 lead.

The Tar Heels are back on the road to face No. 20 Wake Forest.

Virginia stays at home for its third of four consecutive home games, taking on Pittsburgh.