Salk: Russell Wilson a poser? He’s trying to be the QB he’s not Sticks and stones may break my bones but words will never hurt me.

It’s a nice sentiment and most kids try to turn it into a reality, but we all know it is often wishful thinking. We all know that words can hurt. And for Russell Wilson, that has to be true right now.

First, his teammates in Seattle said nasty things about him to the press. It was anonymous, but it still had to sting. Then he was booed by the fans that had cheered him most. He said it didn’t bother him, but that is hard to believe. Next came his new “fans” in Denver, who have now booed the Broncos’ offense in all three of their home games so far.

Forget sticks and stones, and forget being a child. That would hurt anyone, and especially a man consumed by the desire to leave a positive legacy.

And while the words and sounds had to hurt, none of them were specific. None of them cut to the heart of who he was. That is until Kyle Brandt went on the NFL Network’s Good Morning Football and called Russ a “poser.”

And worst of all, a poser doesn’t understand themselves. The poser can’t see their own true self because they are too caught up in the person they want to be.

Brandt was referring to Russell Wilson the person. To his personality. And he might be right about that. Certainly, he has been accused of inauthenticity before by teammates and others. He has clearly struggled to walk the line between superstardom and relatability. But I’m not concerned with that. I don’t really care if he is well liked or respected by his peers. I don’t know if he is really a poser.

But I do think he is a football poser.

That is to say he doesn’t seem to understand who he is as a quarterback because he is too caught up in trying to be the quarterback he wants to be.

I’ve heard some interesting takes the last few days on Russ. Some people think he is past his prime. Others think he was never good but the Seahawks found a way to make him appear so. Still others think this is just taking some extra time because they haven’t practiced enough in Denver and this will turn like Tom Brady’s offense did after a rough patch at first in Tampa.

Maybe some of those opinions are true, but none represent my view on this.

Russell is short. I know, you’ve heard that before. But I’m not here to tell you it keeps him from being successful. It does not. I have said for years that he succeeds because he finds other ways to make the same plays a taller quarterback makes from the pocket. He slides a step or two. He throws better on the run. He uses his legs to create better angles.

Can Russ throw from the pocket? Yes, of course he can. Is he an elite pocket passer? No. That isn’t his strength. Unfortunately for him, that is what he wants to be known for. That is the legacy he wants.

Pete Carroll has many strengths as a coach, but among the most important is his ability to see the positive in players. He sees what they are good at more than their weaknesses, and then he puts them in positions to take advantage of those strengths. In this case, he (and his offensive coordinators starting with Darrell Bevell) devised an offensive scheme that utilized read option concepts, moved the quarterback out of the pocket often, and took tons of deep shots off play action. Those are, not coincidentally, the things that do make Russell elite. And they were not Carroll (or Bevell) staples at any time before the hooked up with Russ. They found a way to use his best abilities to get the most out of him and it worked for a long time.

Unfortunately, Russ wants to be someone else. Those strengths weren’t earning him MVP votes. They weren’t helping him throw for 4,500 yards, and that was costing him the legacy he desired. So he left. He left for an offensive scheme designed to put the ball in his hands. He left for the control that made sure no coach would tell him to hand the ball off when he didn’t want to.

But he doesn’t understand his own strengths. And that makes him a football poser. A quarterback who can’t see what others do about himself.

We have seen it now in the first five games of this season. It was obvious in Week 1 when Russ threw it 42 times against the Seahawks despite his team running for 5.2 yards per carry. And it was obvious in the last moments against Indianapolis when he dropped into shotgun for the final play and threw incomplete over the middle from the pocket.

I believe Russ could still have great years in the right system. He can still move and throw on the run. He can still run play-action passes. And he can be very accurate. But he isn’t Tom Brady, Drew Brees, Peyton Manning or Aaron Rodgers. He is Russell Wilson.

Apparently, that isn’t who he wants to be. He isn’t comfortable in his own cleats. And that is what makes him a poser.

• Rooting against Russell Wilson, Broncos easy for Seahawks fans — and fun
• Why Russell Wilson gave Broncos a break with contract he wouldn’t have given Seahawks 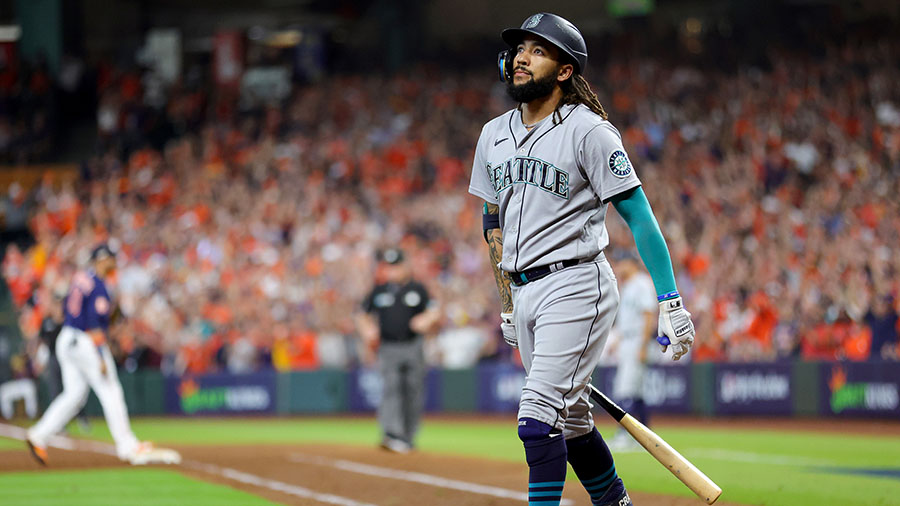 Close
Salk: Russell Wilson a poser? He’s trying to be the QB he’s not