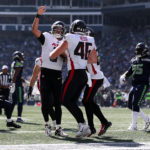 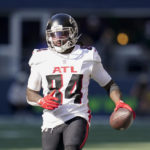 The new-look Seahawks’ defense is still working out some kinks, and the offense was a play short of bailing the team out.

Seattle’s defense broke a little more than it bent on Sunday, with the Atlanta Falcons coming away with a 27-23 victory at Lumen Field for their first win of the season after a late interception.

The Seahawks fall to 1-2 overall with the loss.

It was a back and forth affair, and the Seahawks had a chance to win after a fumble recovery with about five minutes left to go and trailing by just four points. Seattle couldn’t come up with the big play it needed, unfortunately, with Geno Smith’s fourth-and-18 pass attempt picked off by Atlanta’s Richie Grant inside the final 90 seconds, allowing the Falcons to put the game on ice.

The Falcons were 4 of 7 on third down and had 18 first downs, having a much easier time on offense than the Hawks. Despite that, Seattle outgained Atlanta 420 total yards to 386, but the Falcons benefited from six Seahawks penalties that amounted to 47 yards, while Atlanta was flagged just twice all day for 15 yards.

Perhaps the biggest difference was Atlanta’s success in the red zone, as it scored three times on five trips inside Seattle’s 20 whereas the Seahawks were just 2 of 5 themselves.

Cordarrelle Patterson had a huge day for the Falcons, rushing 17 time for 141 yards and a touchdown.

The Falcons had a balanced attack on offense, as well, with tight end Kyle Pitts hauling in five receptions from quarterback Marcus Mariota for 87 yards.

Seahawks QB Geno Smith had a solid performance, throwing for 325 yards on 32-of-44 passing with two touchdowns and an interception, but Seattle’s running game was a little under-powered compared to Atlanta’s with 112 yards to the Falcons’ 179. Rashaad Penny rushed for 66 yards on 14 carries to lead Seattle’s runners.

Running back Travis Homer left the game in the first half with a foot injury and was subsequently ruled out for the rest of the game.

.@Seahawks injury update: RB Travis Homer will not return to the game.

Veteran wide receiver Tyler Lockett spent time in the blue tent, as well, but was able to return.

For details on how to stream Seahawks games online from Seattle Sports, click here.