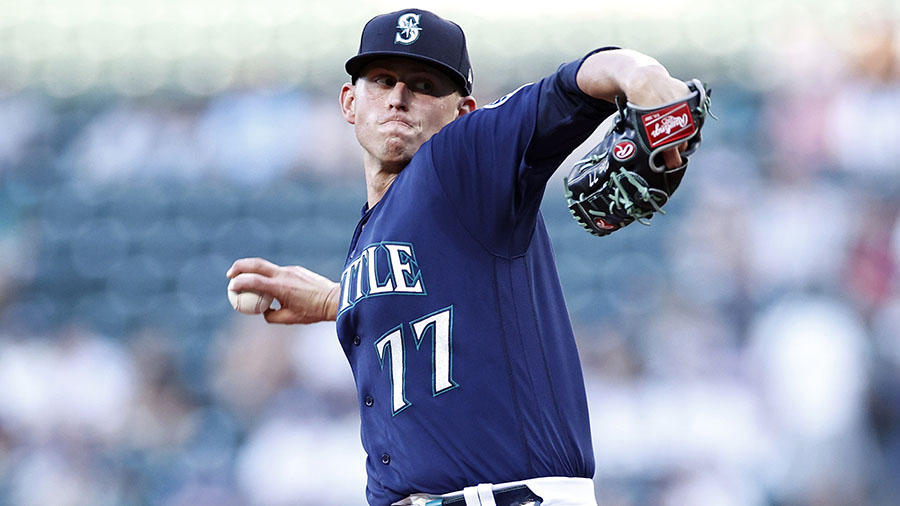 The Mariners made a number of moves involving the roster before Wednesday’s series finale against the New York Yankees, and they’ve also made a big decision regarding the team’s starting rotation.

ESPN’s Jeff Passan: Luis Castillo doing what the Mariners got him to do

As far as roster moves go, the Mariners have activated utility man Dylan Moore (back) and reliever Diego Castillo (shoulder) from the injured list while optioning outfielder/DH Kyle Lewis and reliever Brennan Bernardino to Triple-A Tacoma.

Additionally, Seattle has made a decision regarding their six starting pitchers as manager Scott Servais told reporters that Chris Flexen will be pitching out of the bullpen for the time being while Luis Castillo, Robbie Ray, Logan Gilbert, Marco Gonzales and rookie George Kirby are the team’s five starters.

“We sat with Flex here a couple days ago and I explained to him where we’re at,” Servais said of the move with Flexen. “And when you’re looking at a team, you’re just trying to (figure out) what’s the best way to use all the assets that you have?”

With Kirby pitching well right now, Servais and the Mariners want the rookie to stay in the rotation.

“We understand he may have some limitations innings-wise and workload-wise as we get down the stretch, so I think there’s a good chance that Flex comes back into our rotation and starts for us at some point this year,” Servais said. “But for where we’re at in this moment in time, we thought (this was the best decision).”

Flexen has pitched out of the bullpen before in his career, Servais noted, and he thinks the right-hander’s stuff will play well as a reliever and will likely tick up a bit, too.

“It’s a really valuable role for us and our team,” Servais said. “We have six starters on our team. Flex is still one of them, but he will not be in the rotation as of right now. We’ll wait and see how it plays out. And to Flex’s credit, he understands where the team is at and he’s taken a good attitude about it, and we need a good attitude.”

Flexen will not be used as a piggyback option for Kirby to help manage his innings, Servais said. The skipper also said that with Kirby, the Mariners will monitor his workload on a start-by-start basis and that they don’t have any innings limit or restriction in mind.

As for Gonzales, who many thought would be the odd man out, Servais gave a big vote of confidence in the veteran southpaw.

“We know what Marco is capable of doing, and Marco is super competitive. He figures out a way to give your team a chance to win,” he said.

The Mariners expected to get a notable boost to the lineup when they activated Lewis, the 2020 American League Rookie of the Year, from the injured list near the end of July. But the slugging outfielder has struggled, hitting just .098 with four hits and 18 strikeouts in 14 games since returning. He also stuck out in 10 of his last 13 at-bats.

Servais said that Lewis’ big tool is his bat, and that needs to be better and more consistent.

“Kind of in the role that he was in here, I do think there’s a role for him on our club but you need to be productive when you get a chance to play, whether it’s the DH or coming off the bench or whatnot,” he said. “So it comes down to the bat. He needs more at-bats. He needs timing. This guy hasn’t played a lot (due to injury). So hopefully he can get going and hopefully get back to help us out.”

“We’ve got some players on our roster with similar skill sets (to Lewis),” Servais added. “And like I explained to Kyle, we’re in a different spot now than maybe we were a couple years ago. Every game is important and having guys that are going to contribute and help you win games in different ways is also important. I think going forward, again, it comes down to the bat. There’s no other way to put it. You’re swinging good, you hit, you play. I’ve been saying that for a number of years.”

The Mariners-Yankees series finale begins at 1:10 p.m. Wednesday, with coverage on Seattle Sports Station 710 AM, SeattleSports.com and the Seattle Sports starting at noon with the pregame show.

• Moore is back and at shortstop to give J.P. Crawford a day off. Servais said Crawford has “been grinding through this little stint” and isn’t at 100%, so the Mariners hope having Wednesday off as well as the team being off Thursday will help him.

• Servais, a longtime MLB catcher, called Tuesday’s 13-inning 1-0 win over the Yankees the best-pitched game he’s ever been a part of.