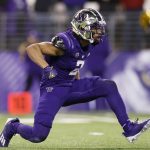 A total of four UW Huskies and two WSU Cougars were selected in the 2022 NFL Draft, and the picks were across all three days of the annual seven-round event in Las Vegas.

The Huskies had two cornerbacks added to their legacy of high-round defensive backs in the draft (Trent McDuffie and Kyler Gordon), while the biggest story may be the Seahawks keeping Everett native Abraham Lucas, an offensive tackle from Wazzu, in the state.

Here’s a quick look at where the local college players landed in the draft.

Note: Hometowns of players who grew up in Washington state listed in parentheses.

Trent McDuffie is a truly inspirational player. Get to know the Washington DB. 🙏@trent_mcduffie | @UW_Football

Our new offensive lineman Abraham Lucas checks in with a message for the @12s! 📢 pic.twitter.com/brlgiC9H8A

Dreams are about to become reality for Cade Otton.

LUKE to the LEAGUE 🔥@LukeWattenberg

"A steal for any NFL team that takes him…" 💎#GoCougs | @JaylenWatson12 pic.twitter.com/fGjUmKxjWR