A day almost five years in the making arrived for Julio Rodríguez and the Seattle Mariners on Monday. Rodríguez, the No. 2 overall prospect according to Baseball America who Seattle signed as a 16 year old in July 2017, was announced as making the Mariners’ roster for opening day later this week.

Rodríguez, now 21, has done everything in his power this spring to show he belongs in the big leagues, and the Mariners have given him every opportunity, as well. In a team-high 34 plate appearances in Cactus League play entering Monday, Rodríguez leads the M’s in just about every offensive category – including all the slash line stats (.419/.471/.839), OPS (1.310), hits (13), runs (nine), RBIs (eight), stolen bases (three), home runs (tied with three) and doubles (tied with four).

Manager Scott Servais called Rodríguez into his office Monday morning to tell him the news. Rodríguez shared the conversation with Mike Salk.

“He was talking to me, asking how I felt, how I felt about my spring training, and I said, ‘I feel pretty good. I feel pretty good with the work I did.’ And then he said he thought I was ready, and I feel it too,” Rodríguez said.

While Rodríguez’s whole game is turning heads, one particular thing about him surprised Servais.

“I was just trying to do everything I could possibly do with my skill (this spring),” Rodríguez said. “(The Mariners) were just really happy how I did everything, and one thing that (Servais) said about me was he knew that I was gonna do a lot of the things I did, but he wasn’t expecting that I was going to be as fast as I was. That was one of the things too that he pointed out, my running game.”

Even though Rodríguez is the youngest member of the Mariners’ roster, he’s fitting right in with his teammates.

Rodríguez said he’s felt their acceptance from the first day of camp.

“Definitely,” he responded when asked by Salk if he feels like a part of the team. “Since the first day that I was in spring training… they definitely embraced me and they definitely allowed me to be myself. So that was a really cool feeling for me. Being the the young guy… everybody will talk to me in a normal way, not trying to put me down or anything. So it’s a really cool feeling just to be around everybody here and the way they treat me, too.”

When Rodríguez puts on a Mariners uniform for the first time in his MLB debut, the number on his jersey will be 44. So what’s the story behind that?

“I’ve said it before, the number picked me,” he told Salk. “It was the first number I got as a professional in the instructional league down there in the Dominican Republic. I looked at pictures and it looked very good on my back so I decided to make history with it.”

The Mariners will wrap up spring training with two final games – 1:10 p.m. Monday against Arizona, and 12:05 p.m. Tuesday against Cincinnati. Both games will air live on Seattle Sports Station 710 AM, as will the regular season opener set for 1:10 p.m. Thursday at Minnesota, though that game is at risk of being postponed to Friday due to inclement weather.

You can hear the full Mike Salk Show interview with Rodríguez in the player below or the video at the top of this post.

Stecker: M’s grueling travel can be solved with MLB realignment 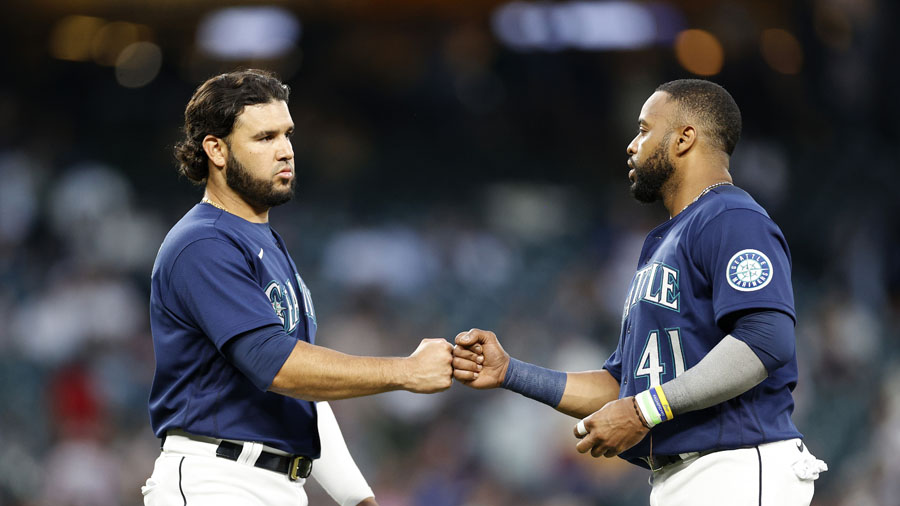