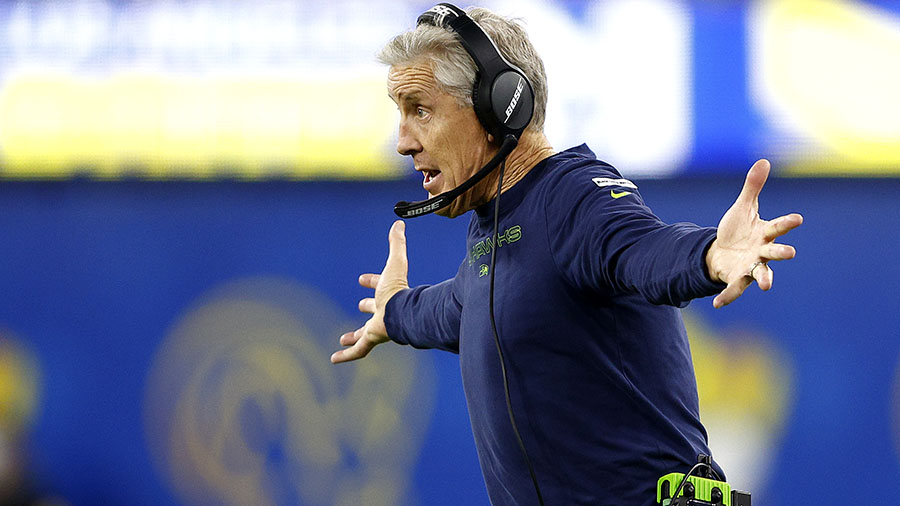 For the first time in the fabulous careers of quarterback Russell Wilson and linebacker Bobby Wagner, the Seahawks will have a losing season.

Hawks fall to Rams | Instant Reaction | Rost: It’s been that kind of year

Seattle traveled to Los Angeles to take on the Rams on Tuesday due to the latter having a major COVID outbreak late last week. The Seahawks also had their fair share of players on the reserve/COVID list for the game, including star receiver Tyler Lockett.

The result was the Rams victorious 20-10 for their 10th win of the year and the Seahawks falling to 5-9 with just three games remaining this season.

The score was tied at 3-3 at halftime and the Seahawks started the second half with what was arguably the team’s best touchdown drive of the season, but too many things went wrong or worked against the team from that point forward.

Specifically, there are five key moments that you can point to when asking why the Seahawks lost this game.

Punt turns into a field goal

Let’s start with the moment that happened earliest.

The Seahawks won the coin toss and deferred, placing their defense on the field to start the game. The Rams drove into Seattle territory, but they stalled and were forced to punt. But after Johnny Hekker’s punt, second-year defensive end Alton Robinson ran into him, giving the Rams five more yards to work with.

Rams head coach Sean McVay elected to go get points, and his kicker, Matt Gay, drilled a 55-yard try to get the Rams on the board.

In a game that was either tied or a one-score contest until there were fewer than 2 minutes left, that field goal did prove to be pretty important overall.

Let’s be honest – Wilson didn’t look like himself in his first three games since returning from injury. But he did look a lot better in Seattle’s last two games. So, naturally, many of us assumed he was back and some of the missed throws we saw during that three-game stretch were ancient history.

On third-and-14 in the fourth quarter and down a score, star Seahawks receiver DK Metcalf burned All-Pro Rams corner Jalen Ramsey after Wilson had looked off the safety. A good throw and Metcalf at worst has a massive gain, but more than likely he was going to score a touchdown and tie the game up.

Wilson missed the big receiver, and missed him bad, underthrowing it by a good amount of yards and allowing Ramsey to break back to the ball and get a hand on it.

Just a reminder that @jalenramsey is the best corner in the league.

(Note: That tweet caption is hilarious given how Ramsey got bailed out by a poor throw.)

Wilson overall had a disappointing game, completing just 17 of 31 passes for 156 yards and a late interception while down 10, but with Lockett out, every throw was that much more important. And Metcalf had a chance to have far and away the biggest play of the game for the Seahawks offensively, but the throw, like the team and the season as a whole, came up short.

This is a quick and painful one.

After gaining nine yards between first and second down while down seven late in the fourth quarter, the Seahawks had third-and-1 at the Rams’ 45-yard line. Moving the sticks was critical to try and tie the game.

But before Seattle could get the play off, running back Rashaad Penny flinched while in the backfield as receiver Freddie Swain went in motion. That flinch was penalized, and third-and-short turned into third-and-6.

At that point in the game, the Seahawks were in four-down mode, but Penny got no gain on third down and then that fourth down happened. Which is up next…

It’s out of order, but we’ll start with what happened on the aforementioned fourth down.

On fourth-and-six, Wilson targeted running back DeeJay Dallas. The ball was underthrown, but Rams linebacker Ernest Jones hit Dallas and swiped at his arms without turning to look for the ball. No flag was thrown and the Rams got the ball back as a result.

Dallas also made things worse for himself and the team by kicking the ball after the play, resulting in a 15-yard penalty that let the Rams’ ensuing drive start in Seattle territory. The Rams would kick a field goal to go up 10 with just under 2 minutes left, effectively ending the game and, as a result, the Seahawks’ season.

Now a few things on that play:

First, that was a defensive pass interference penalty – it just wasn’t called.

Second, even if the argument is that the ball was underthrown, we see that specific play get called in nearly every single NFL game.

Thirdly, this ref crew led by Shawn Hochuli calls more penalties than any crew in the NFL. That Hochuli’s crew is the one that ate that flag is astounding, especially as they’d called some questionable penalties in this game, such as one that, up until the Dallas-Jones play, was the worst thing involving the crew in this game.

On the first play of the fourth quarter, quarterback Matthew Stafford found receiver Ben Skowronek for eight yards on third-and-12, resulting in a Rams punt. But Seahawks cornerback Bless Austin was called for a holding call on Cooper Kupp.

After seeing the replay, it appeared Austin was attempting to redirect Kupp, who threw his arm in the air and staggered to get the penalty despite Austin not holding the NFL’s leading receiver.

So instead of the Seahawks getting the ball back with the game tied 10-10, the Rams continued their drive, and thanks to a few big plays scored a touchdown by, you guessed it, Cooper Kupp. That would ultimately be the deciding score in this game.

The Seahawks certainly have plenty of things to point to for why they lost in Los Angeles on Tuesday night, but a questionable call and a head-scratching no-call certainly contributed and absolutely played a part in the Rams getting the win.

Going forward, the Seahawks have three games left, next to no chance of making the playoffs, and an awful lot of questions regarding the future of the franchise’s key leaders.