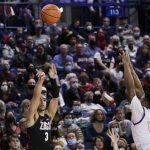 Freshman Hunter Sallis added 16 points for Gonzaga (3-0), which was coming off a decisive win over then-No. 5 Texas on Saturday.

Keondre Montgomery scored 13 points for Alcorn State (0-4), which was no match for the taller Bulldogs. Justin Thomas added 10.

Gonzaga has been ranked No. 1 for 19 consecutive weeks, the fifth-longest streak in AP rankings history.

Strawther had 15 points in the first half, while Holmgren had 11 points and three blocked shots.

The Zags substituted liberally in the second half, and still pulled away.

Alcorn State: The Braves had no answer for Gonzaga’s size and speed. … They also lost at Washington State, Seattle and Portland in the past seven days during a trip to open the season. … Gonzaga beat them in the only other meeting in 1992.

Gonzaga: It wasn’t quite as electric in The Kennel as it was for the Texas game last weekend, but the Zags took care of business against an overmatched foe. … Drew Timme’s 37 points against Texas were third all-time in the McCarthey Athletic Center, behind Adam Morrison (42) and Ronny Turiaf (40). … The Zags have won at least 30 games for five straight seasons and led the nation in scoring the past three seasons.

Gonzaga: Hosts Bellarmine on Friday, then plays neutral-site games next week against No. 2 UCLA and No. 7 Duke.

Saturday: No. 1 Zags beats No. 5 Texas with Few back at helm